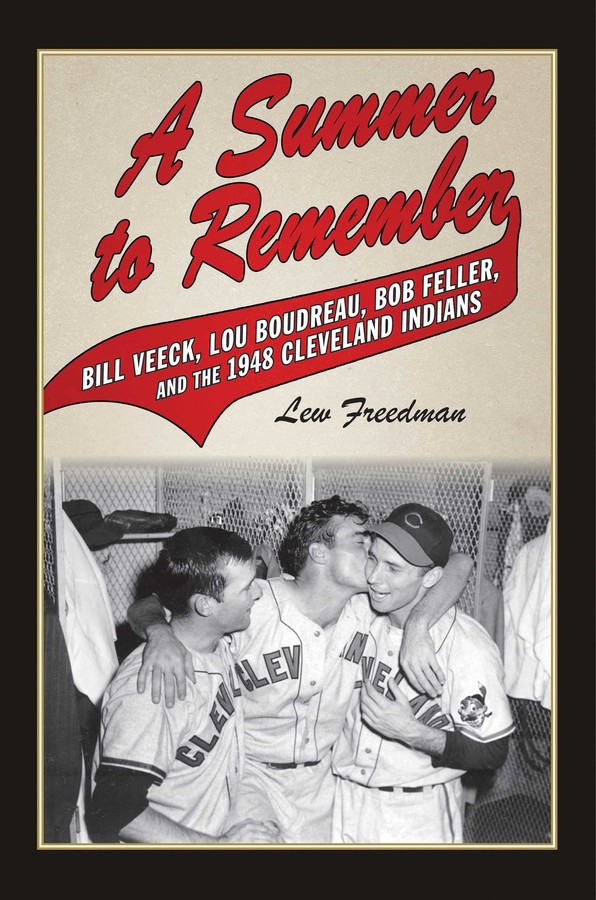 A Summer to Remember

While the Cleveland Indians are known lately more for being cellar dwellers than world champions, that wasn’t the case in 1948. Ranked by the Sporting News as the ninth-best team in baseball history, the ’48 Indians were a colorful group of guys, led by the always colorful Bill Veeck, the future Hall of Famer who was running his first team. But the Indians weren’t just well run in the front office; their team on the field was comprised of seven future Hall of Famers.

Player-manager Lou Boudreau would not only lead his team to the playoffs, but would also become the first shortstop to ever win the American League’s Most Valuable Player award. He also relied on pitchers Bob Feller, Bob Lemon, and Negro leagues legend Satchel Paige (then forty-one years old), as well as second baseman Joe Gordon and right fielder Larry Doby, who followed Jackie Robinson by only a few weeks in breaking the color barrier in baseball.

The Indians finished the ’48 season at 9758 and were tied with Joe McCarthy’s Boston Red Sox, which led to the first-ever one game playoff in American League history. The Indians were victorious and would then defeat the Boston Braves in six games to win the World Series.

The Monsters of Municipal Stadium is a fantastic look at one of the greatest teams ever to play the game, and at how everyone involved in this extraordinary seasonfrom the players to managementmade 1948 a memorable year for baseball and the city of Cleveland.

Skyhorse Publishing, as well as our Sports Publishing imprint, are proud to publish a broad range of books for readers interested in sportsbooks about baseball, pro football, college football, pro and college basketball, hockey, or soccer, we have a book about your sport or your team.

Whether you are a New York Yankees fan or hail from Red Sox nation; whether you are a die-hard Green Bay Packers or Dallas Cowboys fan; whether you root for the Kentucky Wildcats, Louisville Cardinals, UCLA Bruins, or Kansas Jayhawks; whether you route for the Boston Bruins, Toronto Maple Leafs, Montreal Canadiens, or Los Angeles Kings; we have a book for you. While not every title we publish becomes a New York Times bestseller or a national bestseller, we are committed to publishing books on subjects that are sometimes overlooked by other publishers and to authors whose work might not otherwise find a home.

Lew Freedman is the author of nearly sixty books on sports, including Clouds over the Goalpost, The Original Six, and A Summer to Remember, and is the winner of more than 250 journalism awards. A veteran sportswriter, Freedman was formerly a staff writer for the Chicago Tribune and Philadelphia Inquirer, as well as other papers, and lives in Columbus, Indiana.

"The 1948 Cleveland Indians’ improbable march to a World Series title, with its feel-good story and splashy cast of characters, is so irresistible that even author Freedman’s sometimes-distracting narrative can’t get in the way. Success started with maverick owner Bill Veeck, who acquired the team in 1946 and whose flair for showmanship and fearless acquisition of controversial players—he almost immediately signed future Hall-of-Famer Larry Doby, the first African American to play in the AL—began filling Cleveland’s 78,811-seat stadium. Add the team’s dynamic player-manager Lou Boudreau, who won the MVP that year; the great Bob Feller; lefty knuckleballing rookie-phenom Gene Beardon; the aged but effective Satchel Paige; and outstanding role players that Veeck delivered to manager Boudreau. That season’s ready-made dramatic arc and Freedman’s enthusiasm should win over true baseball fans."
—Alan Moores, Booklist

“Represents ideal reading material for anyone depressed about the current condition of Cleveland sports.”
—The News-Herald

Represents ideal reading material for anyone depressed about the current condition of Cleveland sports.”  The News-Herald

A Summer to Remember