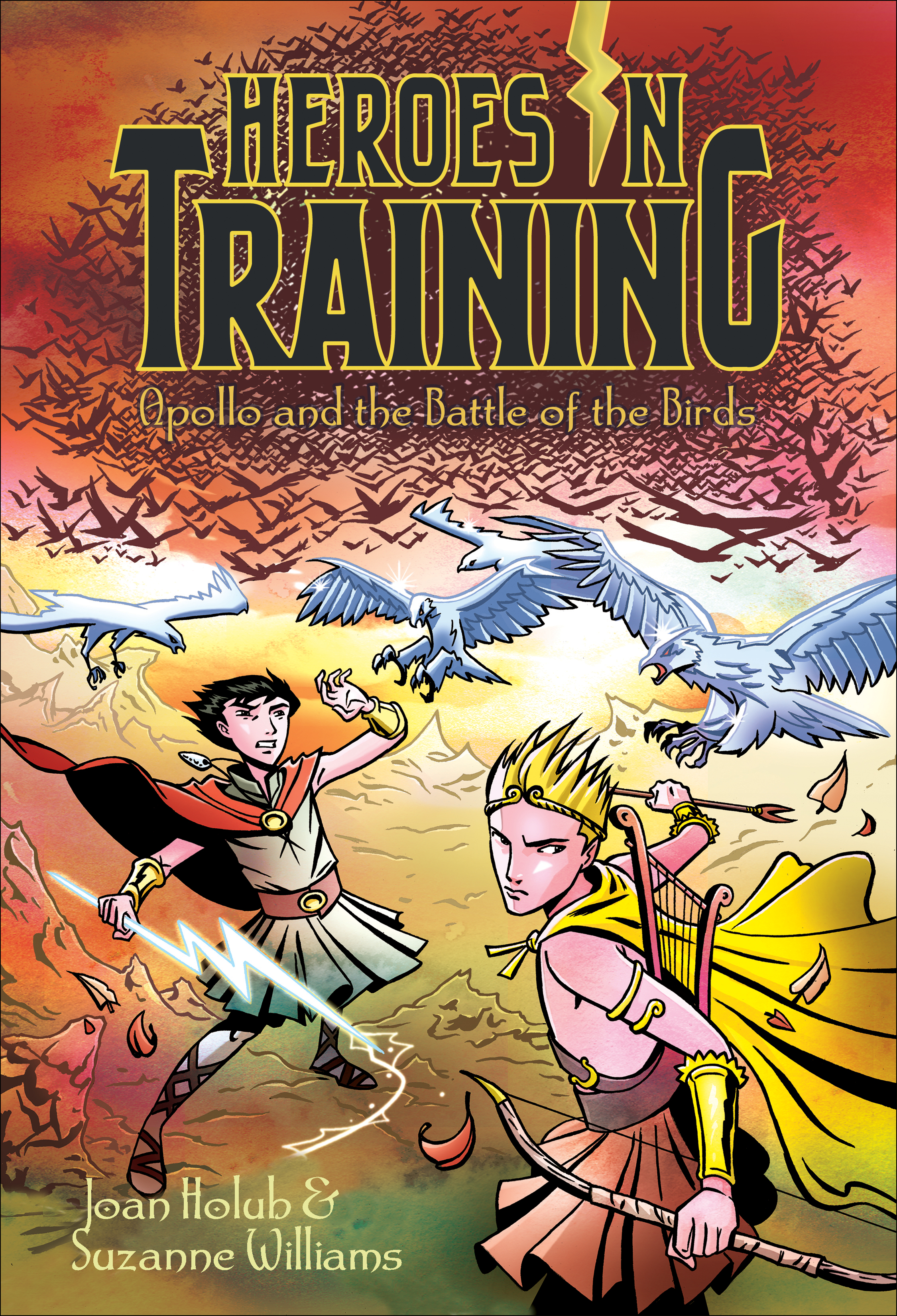 When a flock of angry birds threaten Zeus and his fellow Olympians, they need the help of a new friend—assuming the stranger is actually a friend!

After a horrible drought, Zeus and his fellow Olympians are determined to help restore the land as they try to figure out their current mission, to find a special shield called an aegis. Thanks to some grateful villagers, who benefit from the rain and crops that the young Olympians magically create, they find the armor they need.

But they are suddenly swarmed by birds—thousands of killer, scary birds. And when a mysterious boy appears in the chaos, it looks like he might be more connected to the Olympians than they think. Is he friend…or foe?

Ten-year-old Demeter threw one magical glittering, oval-shaped yellow seed into the air. It landed in a field of brown dirt and withered weeds.

Suddenly the field began to glow and glimmer. Rows of golden wheat sprang up next to rows of green, leafy vegetables and trees bearing figs and apples.

Six other Olympians, who were all her same age, stood behind her and watched with wide eyes. They had seen Demeter do this before, but it was still amazing every time.

“A field that once was brown and lean

Is now so healthy and so green!”

Hestia’s brown eyes sparkled, and she clapped her hands together. “Demeter, it’s beautiful!”

Behind them the residents of the small village began to clap and cheer. Young children ran into the field, staring at the plants in wonder.

The village elder, a small, gray-haired woman, approached the Olympian god’s young leader, Zeus. She grabbed his hands in her strong grip.

“Thank you,” she said, her pale eyes glistening with tears of joy. “We have suffered greatly since that horrible Titan Hyperion burned our fields so we could not grow crops. But you have brought us rain and water, and now this. For the first time in many days, I feel hopeful that we will survive. You are our hero.”

Zeus grinned. “Well, it wasn’t just me. It was all of us working together.” He nodded toward the other Olympians. “And now Demeter’s Magic Seeds are growing new crops.”

Poseidon stepped over to Zeus and slung an arm around his shoulders. He waved the long-handled, three-pronged golden trident he’d gotten when he’d discovered he was god of the sea. “And my boltbrain bro and I combined our powers to whip up a nice rainy storm to fill your wells. ‘Zap! Bam! Sizzle!’ ”

“Who are you calling ‘boltbrain,’ Fishlips?” Zeus demanded with a grin.

Laughing, Poseidon lunged toward him with the trident, mock-fighting. Zeus held up Bolt, the magical lightning bolt he carried.

“Bolt, large!” Zeus commanded. Instantly it sprang from dagger-size to the size of Zeus. Zing! Zeus pretended to fend Poseidon off with it.

Hera stepped up to them, her blue eyes snapping with annoyance as she flipped her long blond hair back over her shoulder. “Those are magical objects, not toys,” she scolded. Then she turned to Poseidon. “And since when do you call Zeus ‘bro’?” she asked.

“Since I found out we were brothers, duh,” Poseidon said, beginning to twirl his trident. “We’re almost like twins.”

Zeus and Poseidon did look alike, both with the same wavy hair, but Zeus’s eyes were the color of the sky he commanded, and Poseidon’s were turquoise, like the sea.

Just two weeks before, six of the Olympians—Zeus, Poseidon, Hera, Hades, Hestia, and Demeter—had learned that they all had the same mother. Her name was Rhea and they hadn’t seen her since they were born. Zeus had been raised away from the others by a nymph, a goat, and a bee. And suddenly discovering he had brothers and sisters had been a delicious feeling.

“You can call me ‘bro’ all you want, Bro,” Zeus told Poseidon.

The village elder spread her arms wide and spoke again. “We thank all of you! Please take anything you need for your journey from our fields. We have some bread and cheese we can give you too. Is there anything else you might need?”

Demeter looked down at her tunic, which was torn and stained after their recent encounter with a giant beanstalk. The other Olympians were looking pretty ragged too after weeks on the road.

“Um, do you guys have any spare clothes?” she asked.

The woman nodded. “Of course. I’m sure we can find something for each of you.”

Zeus shaded his eyes against the sun. In the distance a flock of birds slowly flew in a circle. When the sun hit them, they sparkled. Weird. He had been seeing them for days. Those sparkly birds had him a little worried.

At the word “weapons” some of the villagers came closer. “ ‘Weapons’? Why would you need weapons?” asked one grizzled farmer.

“King Cronus doesn’t exactly like the fact that we’re going around fixing what his giant Titan buddies are messing up around the Earth,” Zeus replied. “His Crony soldiers are always after us, and then we usually end up running into monsters, and, well . . . we need weapons to fight them and protect ourselves. Some of us have magical objects that can be used in fights. But not all of us do.”

Hera folded her arms across her chest and glared at Zeus when he said this. She was one of the Olympians without a magical object. Apollo didn’t have one either, but he didn’t seem to mind, the way she did. At the moment he was happily strumming his lyre, singing a tune while some of the village children danced.

The old man nodded. “King Cronus is no friend to anyone here. He and his henchmen Cronies are always stomping on our fields and stealing whatever they like from us. Not to mention trying to take over the world.”

Hades stuck out one arm and pulled back his other, pretending to cock a bow and then shoot an arrow from it. “Not if we can help it! If we run into those Cronies, I can put on my helmet, turn invisible, and shoot at our enemies with my bow and arrows. They’ll never know what hit them!”

“It’s lucky we found those bows and arrows in that abandoned hunting cabin,” Hera said, glaring at Zeus, “seeing as not all of us are lucky enough to have magical objects of our own! Now at least all of us have weapons, even if they aren’t magical.”

“Here is something you should know: I am excellent with a bow,” Apollo said, using rhyme-speak, as he often did.

“I just hope we won’t have to use them,” Demeter added.

The villagers scattered to gather cheese and bread while the Olympians happily filled the packs they were given with fruit and vegetables from the field. Before long they were back on the road to the town of Corinth, dressed in new tunics and carrying packs of food.

“Hey,” Poseidon complained, glancing at Apollo as they walked along, “how come I didn’t get the blue tunic, instead of this orange one? I’m the ruler of the sea, after all. And blue is the color of the sea.”

“It’s true that you are ruler of the sea, but this blue tunic fits great on me,” Apollo replied.

“Stop complaining and just be glad that we haven’t seen a sign of the Cronies in days,” Hades said to Poseidon.

“I wouldn’t be so sure,” Hera said darkly. “They always seem to turn up, no matter how hard we try to throw them off our trail.”

“But we’re in the middle of nowhere,” Poseidon said, looking around. The path to Corinth was taking them across a wide, mountainous area. They tried to stick to the foothills, but there were steep climbs along the trail. “Why is Pythia sending us all the way to Lake Stymphalia to find a shield, anyway?”

“It’s not just any shield. It’s an aegis,” Zeus reminded Poseidon, pronouncing it “EE-jiss.” “It must be super-special, or she wouldn’t make us go to all this trouble to find it.”

“It had better be,” Apollo said, his usually bright eyes growing dark. “I really wanted to go off on my own to find my twin sister, Artemis, but I promised Pythia we’d all stick together.”

Pythia, the Oracle of Delphi, had been sending the Olympians on quests ever since they’d gotten together. The guests had three goals: to find more Olympians; to gather magical objects; and finally, to defeat the evil King Cronus. When they last saw Pythia, she told them to win the aegis through battle.

“Hera, are we still on course?” Zeus asked.

Hera looked at the stone amulet that hung around her neck. It was named Chip and belonged to Zeus. He’d gotten it in Delphi when he’d found Bolt, his magical object. He felt bad that Hera didn’t have her own object yet, so he let her wear Chip, an oval-shaped smooth, gray stone.

Chip was very useful. It could talk when it wanted to, in its own language (Chip Latin). Also, if you asked it a question, writing would appear to give you the answer. It even showed them maps sometimes.

“Which way to Lake Stymphalia, Chip?” Hera asked. Instantly a glowing arrow appeared on the surface of the stone, pointing straight ahead. She grinned. “Looks like we’re good.”

“If you call being hungry and tired and stuck in an orange tunic ‘good,’ then yes, we’re good,” Poseidon grumbled.

They walked on for a while longer, crossing a desertlike plain with mountains rising all around. But as they got closer to Corinth, the land was greener, with thick forest all surrounding them. The ground under their feet was damp and muddy.

Suddenly Hera stopped walking. “That’s a strange track,” she said, kneeling to stare at the ground. “It looks like a human foot. But there’s only one. See? And there’s another track a few feet ahead.”

“A few feet? I thought you said it was one foot,” Poseidon joked.
Joan Holub