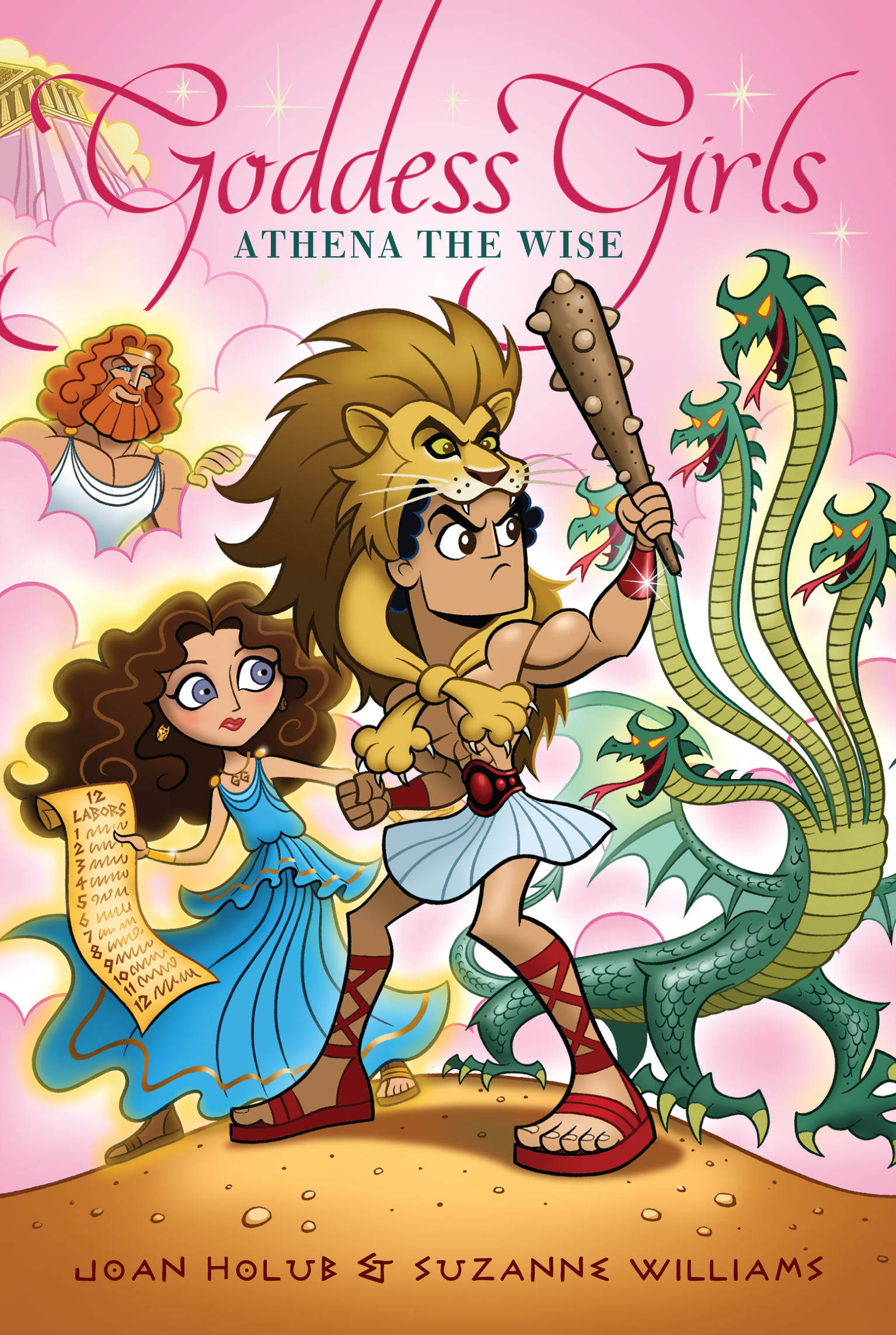 These classic myths from the Greek pantheon are given a modern twist that contemporary tweens can relate to, from dealing with bullies like Medusa to a first crush on an unlikely boy. Goddess Girls follows four goddesses-in-training – Athena, Persephone, Aphrodite, and Artemis – as they navigate the ins and outs of divine social life at Mount Olympus Academy, where the most priviledged gods and goddesses of the Greek pantheon hone their mythical skills.

In book 5, Principal Zeus asks Athena to help Heracles (aka Hercules in the Roman pantheon) complete his twelve labors. But when Heracles starts borrowing Athena's friends things without asking, will she be able to help him set things straight?

WHO’S THAT?” ATHENA ASKED, GESTURING toward an unfamiliar boy as she plunked her tray onto the table where she and her goddessgirl friends always sat for lunch. The entire cafeteria at Mount Olympus Academy was buzzing with excitement over him. Usually she didn’t pay much attention to boys, but even she couldn’t help noticing this one. Dressed in a lion-skin cape—its jaws fit his head like a helmet—he was tall with dark, curly hair, and bursting with muscles like Atlas, the school’s champion weightlifter.

Aphrodite arched a perfectly shaped eyebrow. “You haven’t heard? His name’s Heracles. He was admitted to the Academy only this morning.” A look of disapproval came into her lovely blue eyes as she glanced at him. “I’ll admit he’s cute, but he has absolutely no sense of fashion.”

Athena took a bite of her hero sandwich. A lion cape was perhaps overkill as a fashion statement.

“I heard he’s a skilled archer,” said Artemis. “But I’ll believe it when I see it.”

She frowned in his direction. “Word is that he’s mortal, just like Orion. So maybe he’s a liar, too.” Orion had been her disappointing first crush, too stuck on himself to notice anyone else’s feelings—especially hers. Now she tended to look upon all boys with suspicion, particularly those who reminded her of Orion in any way.

Persephone took a sip from her carton of nectar. “So he’s mortal and he dresses weird. That doesn’t mean he isn’t nice.” She was sensitive about stuff like that. Probably because her crush, Hades, had often been misunderstood just because he came from the Underworld.

A burst of admiring laughter came from the table where Heracles sat, drawing the girls’ eyes. He seemed to have wasted no time in making new friends among the godboys. Several of them, including Hades; Artemis’s twin brother, Apollo; Ares; and Poseidon were hanging on his every word. Athena couldn’t quite hear what Heracles was saying, but whatever it was probably involved weapons, war, sports, or hunting. In her experience, those were the topics that interested godboys most. Sure enough, moments later Heracles passed around his big, knobby club, which the boys oohed and aahed over. Not to be outdone, Poseidon showed off his trident, and Apollo, his bow.

Thinking she must have missed part of the conversation, Athena asked, “About what?”

Aphrodite, Artemis, and Persephone leaned toward her, as if anxious to hear what she had to say. Athena hesitated. She could well remember how nervous she felt when she first came to MOA less than a year ago. Most of the godboys and goddessgirls here, including her three best friends, had been together for years by then. They were all so beautiful, handsome, gifted, and amazing. If she’d suspected at the time that they were discussing her—sizing her up and making judgments—she would’ve felt way more nervous.

“Maybe we should try to put ourselves in his sandals and wonder what he’s thinking of us, instead of the other way around,” she suggested. “He’s probably wondering if we’re all going to like him. Perhaps he’s trying to impress those godboys.”

Aphrodite blinked. “I never thought of that.”

Persephone smiled at Athena in admiration. “That’s beyond brainy thinking, even for you.”

“Words of wisdom from the goddessgirl of wisdom herself!” added Artemis.

“Thanks,” Athena told them. The praise was nice, but honestly, although she knew she was brainy, she wasn’t so sure she deserved the title of goddessgirl of wisdom. If she were truly wise, she wouldn’t have made all the mistakes she’d made since she’d been here at MOA—like flooding the Earth with inventions, taking on too many classes and extracurriculars, and turning Medusa’s hair into snakes. Besides, words meant nothing without action. So far, she hadn’t done anything herself to welcome Heracles. Well, she could change that.

She finished off her hero sandwich, hoping it would make her feel a little more heroic. Then, gathering her courage, she stood up from the table. “I’m going over to say hi to him. You know, welcome him to the Academy.” She hesitated a moment. Putting herself forward like that didn’t come easy to her—especially with boys. As her friends looked at her in surprise, she hinted, “Anyone want to come with me?”

Before the others could reply, the school intercom crackled to life. There was a tapping sound, as if someone was repeatedly poking at the button. Then Principal Zeus’s voice boomed out of the speaker over the cafeteria door, making everyone jump. “IS THIS THING ON?” Tap tap tap. “MS. HYDRA?” Tap tap tap. “YOU SURE?” After some more crackling, he finally thundered out his message: “CALLING ATHENA! REPORT TO MY OFFICE. PRONTO. ON THE DOUBLE!” A pause. “OH YEAH, AND BY THE WAY, THIS IS PRINCIPAL ZEUS, YOUR DEAR OL’ DAD, IN CASE YOU DIDN’T GUESS!”

Every eye in the cafeteria swung her way. Athena gulped. Zeus was never one to say please, especially if he was displeased about something. After all, he was King of the Gods and Ruler of the Heavens, so manners were not his first priority.

“Change of plans, everyone. I’ll see you later.” Leaving her tray on the table, Athena hurried out the door. Even though—or maybe because— Principal Zeus was her dad, she worried about pleasing him more than anyone else at MOA did. Her stomach did acrobatic flips as she rushed down the hall to his office. She racked her brain trying to think if she’d done something wrong. She was making straight As, so surely none of the teachers had complained. But her dad wasn’t big on friendly fatherly talks or idle chitchat, either. So what could he possibly want?