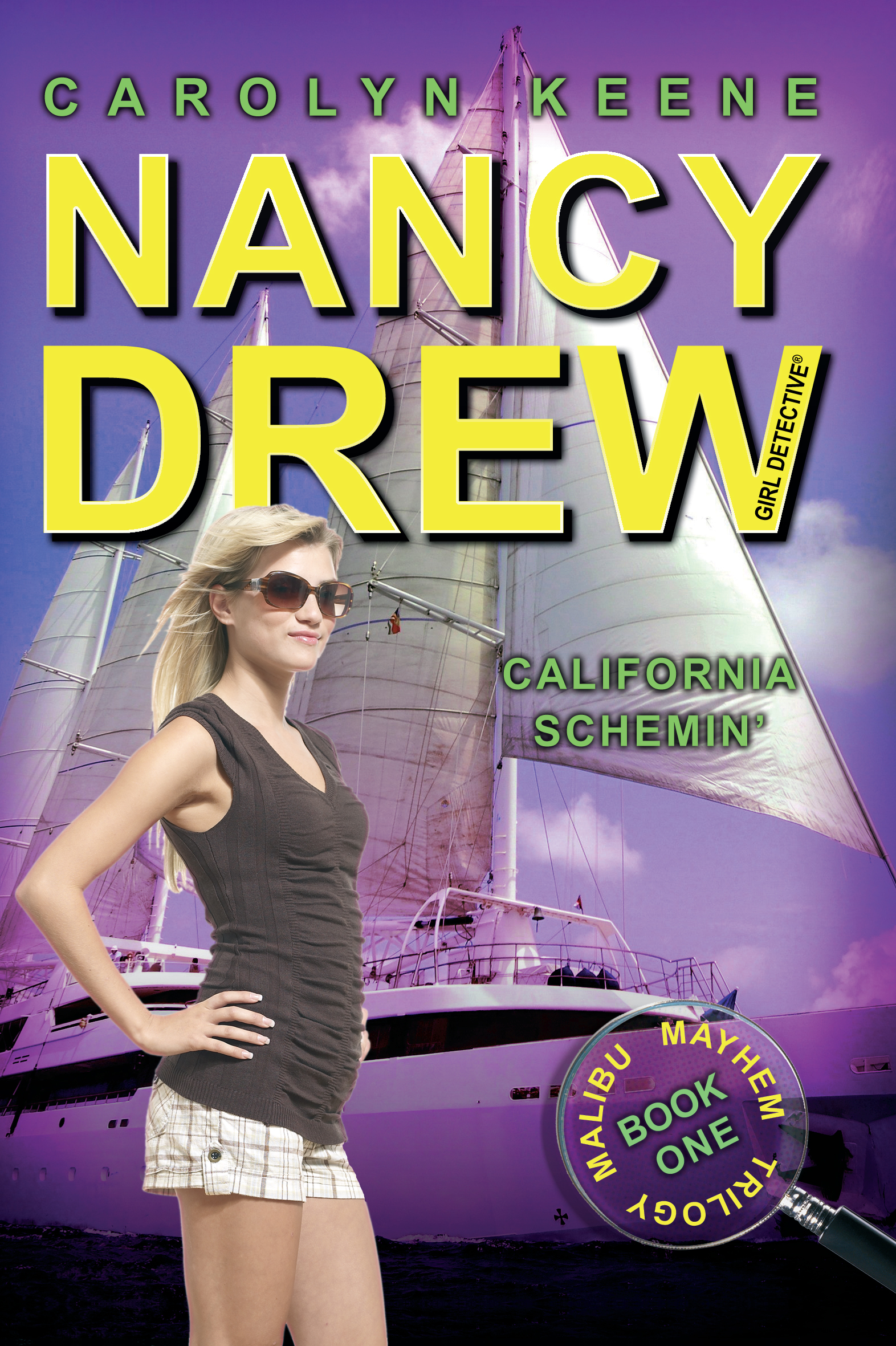 Book One in the Malibu Mayhem Trilogy

Nancy's cases are more mysterious than ever with exciting three book plot arcs!

SUNSET SHOCKER
“Girls,” I said, smiling between smoothie sips. “I don’t think we’re in River Heights anymore.” “For sure,” George said. She raised her own raspberry smoothie glass and toasted, “To Malachite Beach!”

“Playground of the rich and famous,” Bess piped up. “And now…us.”

Leaning forward, I clinked glasses with my BFFs, Bess Marvin and George Fayne. The three of us were lounging on a deck overlooking the most awesome moonlit beach we had ever seen in our lives.”

We’d been in Malachite for only a few hours, but I still wanted to pinch myself to see if I was dreaming. Having the run of a California beach house for three weeks was a dream come true.

George leaned back in her chair to prop her sandy feet on the deck’s railing. The first thing she’d done when we got to the house was kick off her sneakers and race down to the beach. Our own private beach.

“Do I know people in the right places or what?” George asked with a grin. “Who can say their mom worked with Stacey Manning, event planner to the stars?”

“Only you, George,” I teased. “And only about a hundred times.”

Bess scrunched her nose as she studied George’s feet. “How about saying ‘pedicure’?”

I laughed as George wiggled her feet in front of a horrified Bess’s face. Our dream vacation was going to be a blast, thanks to Stacey.

Stacey Manning was truly an event planner extraordinaire. She planned parties and events for some of the hottest celebrities in Hollywood and all over the country.

“Did you read about the Sweet Sixteen Stacey threw for those celebrity twins?” I asked. “The one aboard an actual refurbished pirate ship?”

“You mean the party where each guest left with a full-size treasure chest filled with swag?” Bess asked.

“Some swag,” George snorted. “I read online that those treasure chests were packed with MP3 players, diamond charm bracelets, and cameras.”

“Don’t forget the gift cards,” Bess added. “To the hottest restaurants in Hollywood.”

The three of us stopped talking to watch the setting of a deep orange sun. As it slowly sank behind the ocean, I thought of my boyfriend, Ned, back in River Heights, wishing he was at my side. But as much as I missed Ned, I wouldn’t trade this awesome getaway for anything. Even detectives like us needed a little vacay now and then.

“Hey, George,” Bess asked. “Did Stacey lend us this epic house just because she worked with your mom?”

“Not really,” George said. “Offering us the house was Stacey’s way of thanking my mom. When Stacey goofed up during an event years ago, my mom covered for her.”

“Really?” I said, surprised. “I can’t imagine Stacey goofing up any party.”

“What did she do?” Bess wanted to know.

“Her first day on the job, Stacey placed an ice sculpture next to the flambé station,” George said. “The sculpture had a meltdown, and so did their boss.”

“She might have been if Mom hadn’t taken the blame,” George explained. “Mom always had a soft spot for newbies.”

She stretched back lazily in her chair before adding, “Mom hadn’t heard from Stacey in years. So she was totally surprised when Stacey called last week.”

Stacey had given us the use of not only her house, but her car, private beach, and a stocked fridge.

But as cool as our temporary Malachite house was, we were in California—and that meant places to go and things to see.

“Don’t forget, you guys,” I reminded. “I want to do all the touristy stuff while we’re here. Universal Studios, Venice Beach—”

“Rodeo Drive,” Bess cut in. She flipped her long blond hair over her shoulder and smiled. “We have to do Rodeo Drive as soon as possible.”

George rolled her eyes at the mention of L.A.’s famous and expensive shopping district.

“Bess,” George complained. “Stacey Manning left us her house. Not her credit cards.”

“Okay, Miss Low Maintenance.” Bess sighed. “What do you plan to do—stare at a computer all day, as usual?”

“Actually,” George said, turning toward the ocean, “I’d like to go surfing.”

Surfing was definitely on my list. Especially since Stacey had left us three new boards.

“While you work the California waves,” Bess said, “I’ll work on my California tan.”

Tan? I stared at Bess as if she had three heads. “Bess, you know baking in the sun can be dangerous, even with globs of sunscreen on.”

This time Bess stared at me as if I had three heads.

It sure was. As I glanced up at the darkening Los Angeles sky, even the stars seemed brighter. And speaking of stars…

“Do you think we’ll see any major celebs while we’re in Malachite?” I asked.

“Not me,” George said before taking a noisy slurp of her smoothie. “Who cares about celebrities unless they invented Facebook or Twitter?”

Bess stood up and leaned over the railing. She twisted her head to check out the houses along the beach.

“Maybe, just maybe,” she said slowly, “some of those famous celebrities are living near us.”

Bess could have been right. Stacey’s house wasn’t as huge or grand as the other mansions or villas. But it was on the most famous star-studded beach in the world.

“I’m not sure of our other neighbors,” I said. “But that mansion right next door seems to be some kind of spa.”

Bess spun around. “Did you say spa?” she demanded. “How do you know there’s a spa next door?”

“I read the sign as our taxi drove by,” I said. “It said something like ‘Roland’s Renewal Retreat and Spa.’”

“Talk about having a photographic memory,” George said, smiling at me. “I’m impressed.”

“So am I—about the spa,” Bess said excitedly. “You guys, we have to go there at least once for mani-pedis.”

“As if I’m the spa type,” George scoffed. “What would I need a manicure for?”

“For starters”—Bess picked up George’s hand—“they can probably scrape those calluses off your fingertips. The ones you get from all that keyboarding.”

“Keyboard” was George’s magic word, as was any word that had to do with computers—which is why it was still so hard to believe Bess and George were cousins. Not only did they look totally different, everything they did and liked was as different as Malachite Beach and River Heights.

Bess, George, and I hung out on Stacey’s deck until the cool Santa Ana winds made us shiver.

“Time to go inside,” I said, standing up.

“I’m coming too.” Bess pulled out her phone and checked the time. “I have to catch my favorite guilty pleasure on TV.”

“Who cares about TV when we’re on vacation?” George asked.

“Me,” Bess replied. “There’s no way I’m going to miss Chillin’ with the Casabians.”

I shuddered but not from the cool night air. I knew Chillin’ with the Casabians was a reality show about three super-glam sisters famous for being famous. I also knew from experience that reality shows were bad news.

“Oh, Bess, wasn’t being on Daredevils bad enough?” I groaned.

“Yeah,” George said. “We almost got killed working on that case—and being on that show.”

But Bess shook her head and smiled.

“Chillin’ with the Casabians isn’t like Daredevils. It’s good, goofy fun,” she insisted. “And you just never know what Mandy, Mallory, or Mia will do—or wear—next.”

“Does that mean you’re going to watch Chillin’ with the Casabians with me?” Bess teased George.

“I’m going on Stacey’s computer,” George said. “I’m pretty sure I can make it run even faster than it already does.”

I stopped in my tracks to stare at George.

“Excuse me, Queen of the Cyberzons,” I joked. “But we’re on vacation, and vacation means no work. Period.”

Bess cast a sly glance my way. “No work?” she asked. “Does that mean no mysteries, either?”

Good question. But as much as I loved solving all kinds of mysteries, I also loved having a little time off.

“No mysteries,” I said firmly. “I don’t know about you, but this girl detective is hanging up her spyglass for this vacation.”

“You might as well.” George shrugged. “What’s the worst thing that could happen in a place like this?”

Bess pointed to her wind-whipped hair and said, “A bad hair day?”

I gazed out at the moonlit waves rolling gently onto the beach. Bess and George were right. Malachite Beach was nothing but peaceful and serene. No wonder celebrities and millionaires called it home. Who wouldn’t want to live in such a perfect place? But just as I was about to turn toward the door—

“Omigod!” I gasped as bright red flames shot up on the beach. “You guys—our beach is on fire!”
Carolyn Keene

Book One in the Malibu Mayhem Trilogy