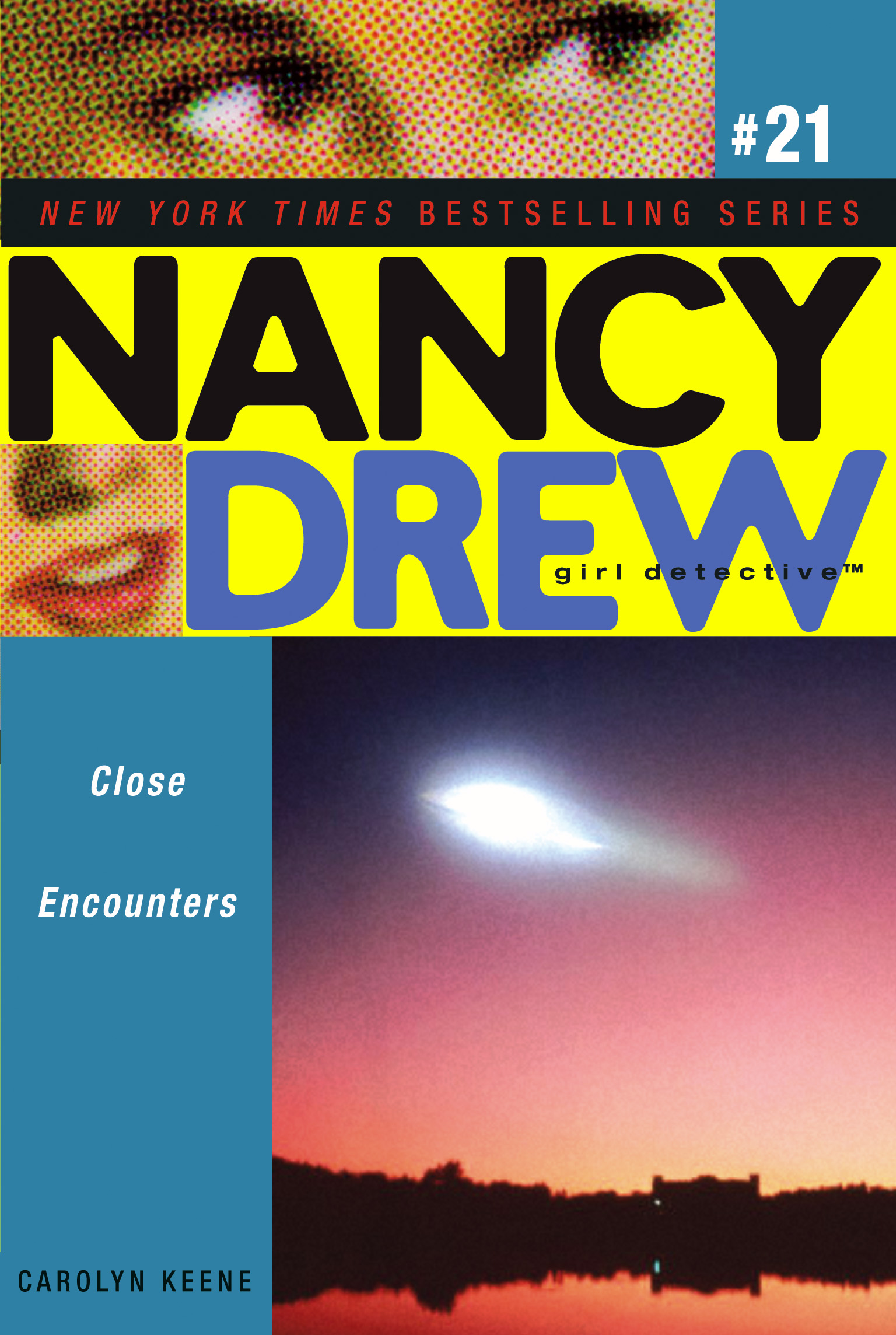 When George, Bess and I headed to Brody's Junction, Vermont, to help George's cousin with her café's website and enjoy a brief vacation, we were looking forward to some downtime -- not to landing in the middle of a media circus.

Hundreds of tourists have invaded the town to watch purported UFO sightings. Odder still are reports of townspeople being abducted, and the strange clues that seem to point to little green men as the culprits. All this speculation has the town going wild, and I hope to have a close encounter with some hard facts before things spin entirely out of control....

Close Encounters 1 Out of This World
I love the smell of Vermont in November!” my best friend Bess Marvin declared as I drove down the twisty mountain road. In spite of the chilly air, Bess had the window down and her long blond hair glinted in the afternoon sun.

“Personally I think it all looks a bit bleak,” George Fayne remarked. George, Bess’s cousin and my other best friend, was sitting behind us. Too leggy for the backseat, George shifted restlessly as she added, “This is primo downhill skiing country—and we’re here too early to enjoy it.”

I grinned to myself. Dark-haired George was definitely from the glass-half-empty side of the Fayne-Marvin family. “If it was ski season, your mom’s friend Winnie couldn’t have spared the time to visit with us,” I told her. “My dad always says this is the time of year when all of Vermont looks like pumpkin pie. We should enjoy it.”

“Pumpkin pie—now that’s a thought,” George said, immediately heartened by the prospect. “Winnie bakes a mean one. Hope she has it on the menu tonight.” After cooking school Winnie Armond had opened a gourmet café in a small town in Vermont; Mrs. Fayne had become a caterer.

We were now on our way to visit Winnie, but I was beginning to wonder if we’d ever get there.

Scenic as the mountain road was, I was getting impatient. Had I taken a wrong turn back at the Burlington airport? And why was the traffic so heavy? I couldn’t do much about the traffic, but I could check our directions.

Just when I was about to pull over and look at the map, Bess spotted a sign.

“You are now entering Brody’s Junction, Vermont,” she read aloud.

“All right!” I said. I hate being lost for long.

Bess took in the view. “Brody’s Junction sure is worth the long drive. It’s exactly like a Hollywood set for a New England country town!”

“If you edited out the traffic,” George remarked.

“A real-time special effect—too bad you can’t work that kind of movie magic on your laptop!” I said. She took up the challenge good-naturedly. “When we get to Brody’s Junction, I’ll give it a try—or at least attempt to program a kill-the-traffic computer game.”

After passing through a small covered bridge, we emerged in the heart of the town. Made up of mainly wooden two- and three-story buildings, Brody’s Junction’s main drag looked like tourist heaven.

Past the line of cars and SUVs, I spied the steeple of a white clapboard church rising above the tree-lined town square. Beyond the town lay steep-sided hills dotted with barns, silos, and cows. Looming over everything was a tall rugged mountain, its sides scarred with ski runs. Towers for the idle lifts glinted like gold in the afternoon light.

A state trooper directing traffic stopped us at a congested intersection.

“Here’s a traffic mystery for you, Nancy,” George teased. “Winnie said this was off-season. Why, then, all the cars?”

The suggestion made me laugh. “I hate to admit it, George, but when it comes to unraveling the riddle of traffic jams, even I’m clueless.”

Maybe I should explain the mystery bit. My name is Nancy Drew, and back home in River Heights I have a rep as a pretty good amateur detective—solving real crimes and helping cops capture bad guys. My friends sometimes rib me about my tendency to land smack in the middle of a whodunit even when I’m on a shopping spree or just hanging with them and having fun.

Frankly, at the moment nothing about this quaint town seemed at all mysterious—except the traffic. I had to agree with Bess, the place did look like a movie-location scout’s dream: Craft shops, art galleries, an ice cream parlor, bakeries, and upscale clothing boutiques lined each side of the street.

At the end of the next block I spotted a green and white awning. “George, that’s the place—Winifred’s Café—right?”

I flicked on my right-turn blinker and pulled into one of the few empty spots in the lot.

Like many of the other storefronts Winifred’s Café was housed in a gleaming white clapboard building. Bay windows framed the entrance. The luscious aromas of something baking wafted out onto the street through the screen door.

“This place smells like heaven!” Bess remarked as she tried the handle on the door. In spite of a CLOSED sign the door opened to the jingle of little bells. A woman looked up from behind the counter. “We’re closed . . . ,” she started to say, then spotted George. “George Fayne, I can’t believe you’re finally here! I had almost given up on you guys,” she said. She hurried over, hugged George, and grinned warmly at Bess and me. She introduced herself as Winnie.

She was in her early forties, with the figure of a twenty-year-old, seriously curly dark hair, and a fresh, rosy complexion. Her brown eyes sparkled as she ushered us farther into the restaurant. A waiter was setting up the tables for dinner, and a young man in an apron was writing that night’s specials on a chalkboard. He looked about the same age as Ned, my boyfriend back home. He was lanky with dark blond hair, and when he turned to greet us, I noticed his unusually large green eyes, framed with dark lashes.

Winnie introduced the man as Joel, her apprentice, and the waiter as Mary Beth. “I’m so glad you finally got here,” Winnie said. “Better call your mom. I just got off the phone with her, and she’s worried.”

While George took her cell and phoned home, I decided it might be good to call my dad. He was glad to hear from me, but he hadn’t expected me to phone home so soon. When my friends and I are on short breaks like this, I sometimes forget to even call—I’m having too much fun.

After I’d shut my phone and put it into my pocket, I went to explain the traffic problem we’d had to Winnie, and to ask about the unexpected crowds in town. She seemed flustered, though. Stressed. And I couldn’t help but wonder if somehow our visit, though expected, was ill timed.

“I could scare up some coffee and sandwiches for you now, if you’re hungry,” she offered. “Though it might be better to get settled into your digs first. Can you hold off until dinner? I’ve reserved a table here for the three of you for the late seating—‘late’ meaning eightish.

“Sorry I can’t put you up myself,” she explained, “but my apartment above the restaurant is small, and I haven’t got a spare room. Fortunately, I made reservations a month ago for you at the Under Mountain Inn—before the crowds hit. The inn’s old, but modernized, so you’ll be comfortable. It’s within walking distance from here and all the shopping.”

George put her hand on Winnie’s shoulder. “Hey, whatever! I’m sure the inn’s great. But why all the tourists? Isn’t it off-season?”

Winnie made a face and dropped her voice. “I should be grateful. We need the business around here after the past two years. There’s been no snow . . . and it’s been too warm for the snowmaking machinery to work well. Ski season’s been a total loss, and then this year, with the summer drought followed by all that October rain, leaf season was a disaster. The whole area is depressed.”

“It sure doesn’t look it now.” I motioned to outside the bay window. People strolled down the sidewalks, dipping into stores. The cars were moving at a crawl.

“Exactly. Which is why I should be happy.” Winnie shrugged. “And I am . . . at least financially. I can barely keep up with the business. But it’s too much. And with the TV crew, the media, and the increased police presence, Brody’s Junction feels more like Boston than home these days.”

“TV crew?” Bess repeated, and moved closer to the window. “Is some new show set here?”

Mary Beth looked up from setting a table and giggled. “You’re kidding, right? Like, you haven’t a clue?”

For a moment Winnie looked at George, puzzled, then threw her hands up. “Of course. Why should you girls know what’s going on here? I guess the news hadn’t hit River Heights before you left town.”

“What news?” George asked, sounding as impatient as I felt.

Joel made a spooky theatrical sound, then grinned sheepishly as Winnie warned him off with a hard look. “They aren’t from around here, Joel.” She turned back toward us. “It seems we’ve been invaded not just by tourists—but by aliens.”
Carolyn Keene