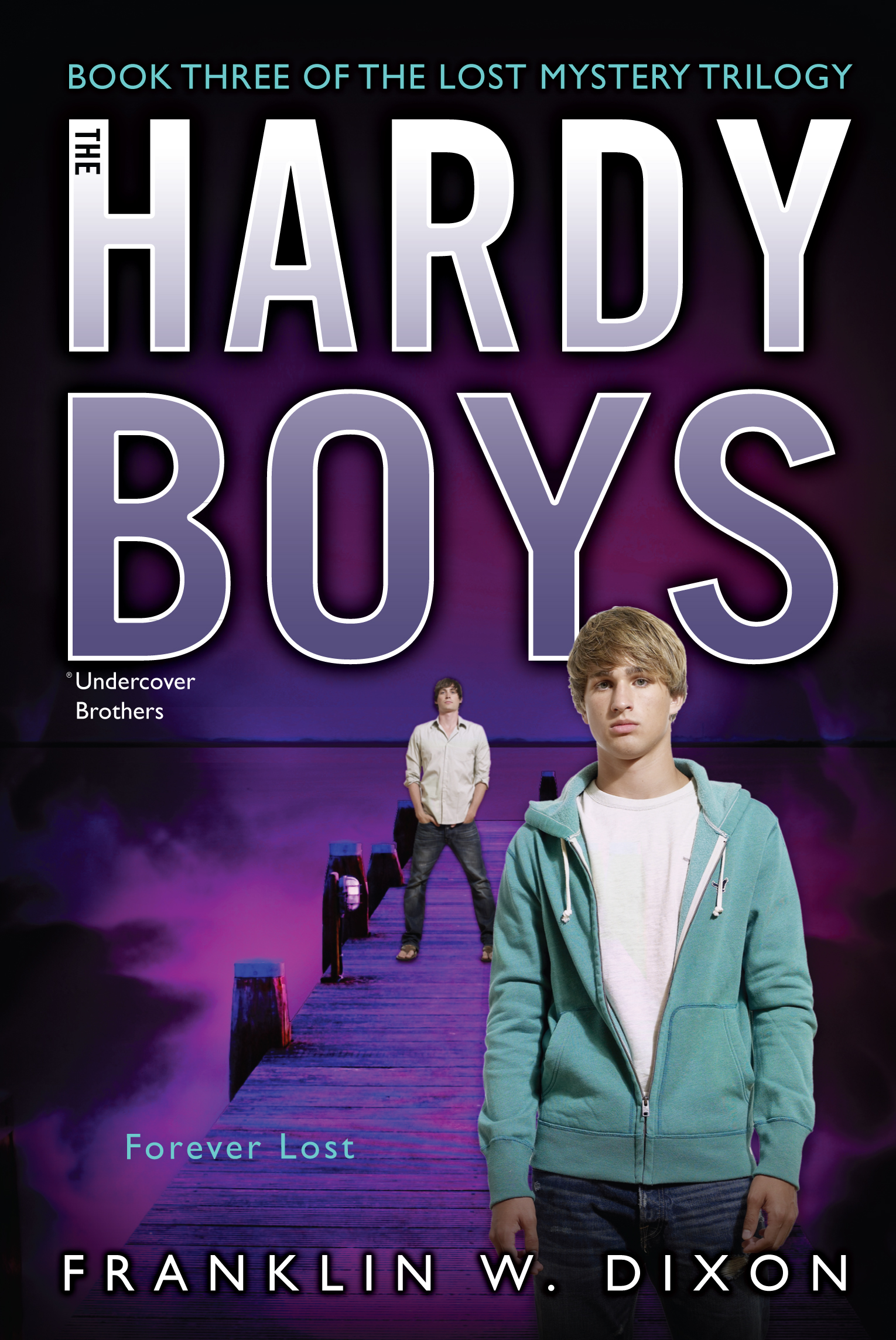 The third book of the Blair-witch-like abduction trilogy. Frank has been discovered at long last and may posess key answers to questions that will solve the mystery of the LOST abductions once and for all.

“Whoa,” I murmured, staring into the hole before me as the dust cleared and I could slowly make out what remained of the hatch I’d recently escaped, now a huge pit filled with rubble.

“Whoa is right,” my brother, Joe, agreed, stepping up beside me and giving me a totally out-of-character mother hen expression. “Are you sure you’re okay, Frank?”

“Okay?” I repeated hollowly. What was okay, these days? My head was pounding from the explosion we’d just witnessed, and just an hour or so before that, I’d escaped from a creepy underground bunker where I’d been held prisoner along with a bunch of kidnapped children and given mysterious psychiatric drugs to keep me quiet. To say that Joe and I had fallen down the Wormhole of Weird on this particular case was understating it a bit.

About a week before, Joe and I had landed about fifty miles outside Misty Falls, Idaho, where, in the last twelve years, eight children had disappeared while camping at Misty Falls State Park. The local police had done extensive investigations into every one of these disappearances, but found nothing. Eventually, once the remains of one of the poor children was found in an abandoned bear cave, the disappearances were dismissed as natural accidents. Local residents especially were passionate about the idea that nature could be dangerous, and all these poor city-slicker campers had just fallen victim to some very nasty, hungry bears.

That was all well and good—until one of the missing kids mysteriously reappeared in town. Justin Greer had been only five when he’d disappeared, but now he was back, seventeen years old and slightly wild. He claimed to have no memory of his parents, though he did start having a few flashbacks after spending days with them. And he had no memories of where he had been for the last twelve years. Add this to his slightly animalistic eating habits, and his tendency to wander out of the hospital and skulk in the bushes, and Justin was a puzzle like no other. My brother Joe and I—agents in an elite force of crime-fighting teens called ATAC—had been called in to help the local investigator, Detective Richard Cole, get to the bottom of all this.

What we’d found, though, had just made the whole situation more baffling. For four nights, Joe and I camped near the sites of the disappearances, terrified by nightly invasions and starting to wonder if something more unearthly than a bear was responsible for these kids’ fates. (Well, Joe was starting to wonder that. I’m really much more logical than he is.) One of our guides, a crusty old park ranger named Farley, turned up murdered in his own cabin just as Joe and I realized that he was Justin’s paternal grandfather. And the next morning, total chaos broke out. An actual bear attacked our campsite, swiping at Joe and forcing Detective Cole to take him to the local ER. And while he was gone, it got even creepier. I fell asleep, only to wake up and find Detective Cole’s partner unconscious outside the tent—right before something hit me over the head and knocked me out too.

How long had it been since then? I hadn’t known until Joe filled me in that I’d been missing for two days. I’d spent that time in this creepy underground bunker. I was kept in a tiny cell, fed sandwiches through a slot in the door a couple of times. Eventually I made friends with a little girl, Alice, who I’d soon realized was one of the kids who’d disappeared—the media has dubbed them the Misty Falls Lost. And when Alice realized I was willing to help her find her brother, whom she misses terribly, she offered to help me break out of there.

Which I’d done. I’d successfully crawled out of a hatch leading into the woods, and Joe was right there, having followed a bunch of stone trail markers to the hatch.

Then it had exploded.

With Alice, and who knew how many other kids, still inside the underground bunker.

“Frank?” Joe asked, frowning as he laid a hand on my shoulder. I realized I’d never answered him, lost in my own thoughts.

“I’m—I—” I was struck by a wave of dizziness and closed my eyes. The drugs—something Alice had called the “forgetting potion”—that had been pumped into my system in the hatch were probably still affecting me. How much of what I was experiencing was real, and how much was chemical?

“Frank, maybe you should sit down.”

But that’s when I heard it. For some reason it seemed much louder than Joe’s voice. . . .

I blinked and searched for the source of the tiny female voice: the rubble that remained of the hatch.

“Oh my gosh,” I whispered, drawing nearer to the lip of the crater the explosion had created.

“Frank!” I heard Joe shout behind me.

“Is he okay?” I heard running footsteps and Detective Cole’s voice as he questioned my brother. But none of that mattered to me right now.

There was no question: The voice was coming from inside the rubble. Alice was probably trapped down there! The rocks, dirt, and hunks of concrete and metal that now filled the crater where the hatch used to lead to an underground chamber were surely dangerous, but I couldn’t let Alice stay trapped down there, alone! What if the rubble shifted and crushed her? What if no one but me ever heard her cries and tried to get her out?

“Alice, I’m coming!” I yelled, climbing over the edge and into the crater. “Stay where you are! Wait for me!”

Alice’s voice mingled with the shouts behind me.

“Frank!” I heard my brother call, but I was busy picking my way through the rubble. Alice’s voice seemed to come from different directions, but I had a feeling she was down and to my right. Gingerly, I moved a big rock and then pushed on a huge chunk of concrete in front of me. If I could move it, I might be able to squeeze down a small opening that led below the rubble. . . .

“Frank, don’t do this! It’s not safe!” Joe’s voice got closer, but I heard someone grab him from behind.

“Don’t you go down there too,” I heard Detective Cole’s voice instruct gravely. “It’s not stable, and it’s not safe for anybody. He’s not listening to reason right now.”

I pushed hard on the slab of concrete, letting out a yell of exertion—the thing was heavy! After what seemed like hours it budged a few inches, just enough for me to squeeze past it and into the little opening that led below.

She was definitely down there. Wasn’t she?

I closed my eyes. My vision was a little blurry, and I suddenly felt weak, like I could fall asleep right there in the rubble.

I opened my eyes with a start. What was I doing? Alice needed me!

Carefully I tried to shrink myself small enough to fit into the tiny tunnel through the rubble. Behind me, I could still hear Joe and the policemen yelling for me to stop, it wasn’t safe. And I knew it wasn’t safe—I wasn’t crazy. Any fool could see the rubble wasn’t stable. But an innocent ten-year-old girl who’d already suffered enough heartache needed my help. ATAC agents are trained to risk our own lives to help those in need.

Breathing slowly, I managed to squeeze myself down far enough to duck into the tunnel. Joe’s shouts got louder, but there was no way I was turning back now. Alice’s voice seemed louder now, closer.

Come get me! Please!

I carefully scooted down the tunnel. It got darker the farther I went, the layers of rubble shutting out daylight. After I’d gone about ten feet, a new sound filled my ears. Rumbling, like the sounds you hear right before a killer thunderstorm. I sucked in my breath. Was it about to . . . ?

But then I heard it. Crash, slam, crash . . . It was the rubble around me! Just then the rock I was standing on shifted, seeming to drop down from under me. I let out a scream as the world around me collapsed. Then something huge and heavy hit my head and the whole world went black.