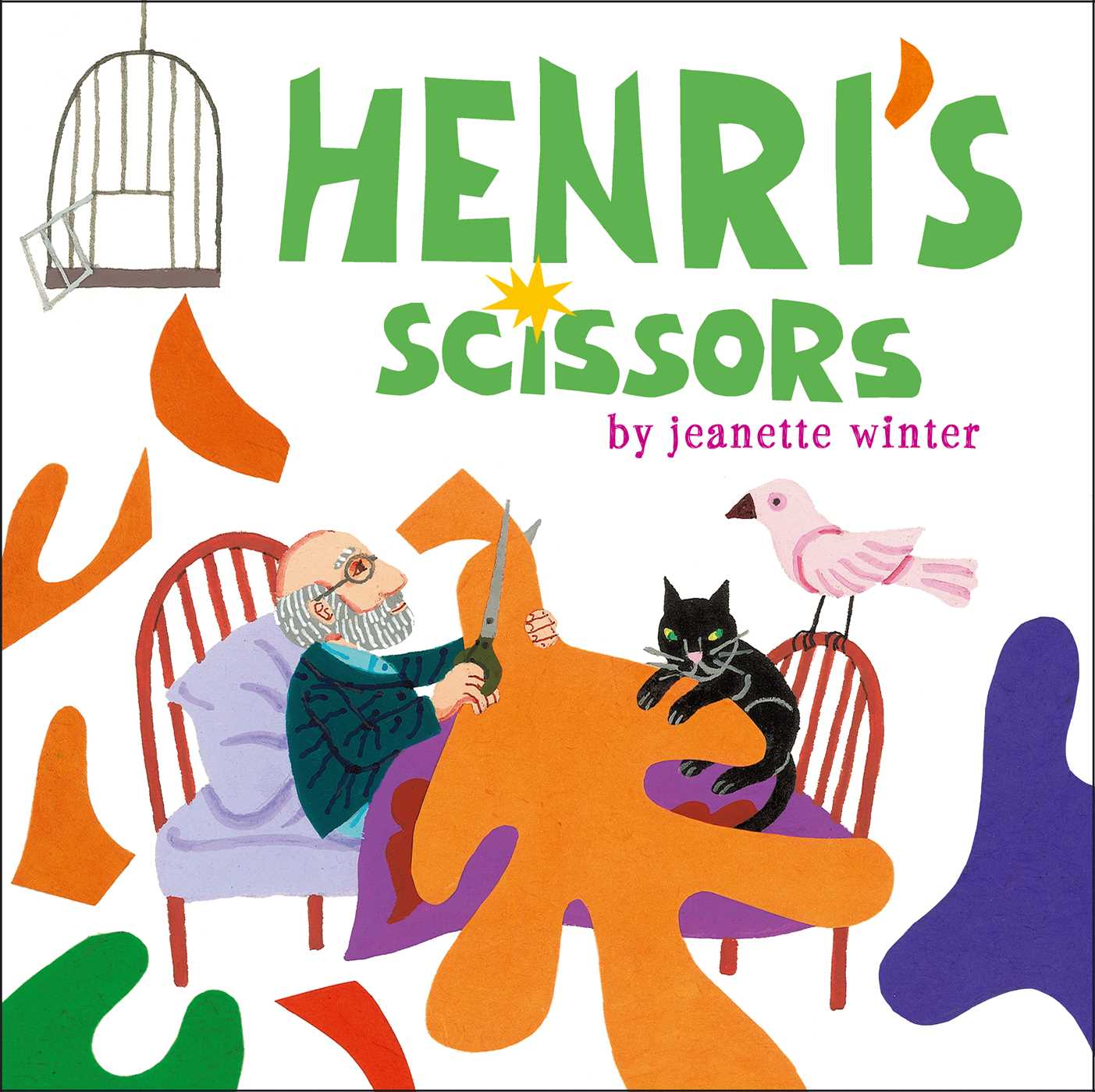 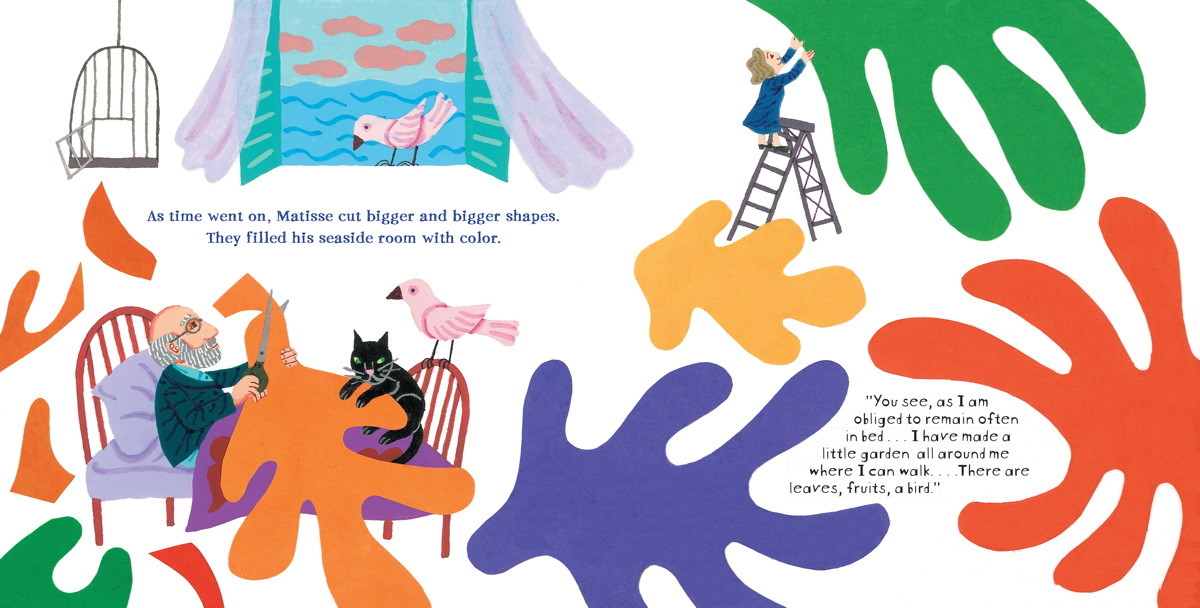 Step into the colorful world of Henri Matisse and his magnificent paper cutouts in this biography by acclaimed picture book creator Jeanette Winter.

In a small weaving town in France, a young boy named Henri-Emile Matisse drew pictures everywhere, and when he grew up, he moved to Paris and became a famous artist who created paintings that were adored around the world. But late in life a serious illness confined him to a wheelchair, and amazingly, it was from there that he created among his most beloved works—enormous and breathtaking paper cutouts.

Based on the life of Henri Matisse, this moving and inspirational picture book biography includes a note from the author, dynamic quotes from Matisse himself, and an illuminating look at a little-known part of a great artist’s creative process.

* “Masterful picture-book biographer Winter (The Watcher, 2011) offers an elegant, accessible portrait of expressive artist Henri Matisse…. As an old man, Matisse becomes ill, and the book turns a stylistic corner, spending the balance of its pages exploring the changes in his circumstances and the subsequent development of his medium and his genius. Unable to paint, he begins cutting shapes from paper and dives into the process, allowing his shapes to grow with his imagination. And the book adapts in turn, the imagery now sprawling across pages, filling the space with rich color in exuberant compositions…. With a gentle narrative dotted with quotes from the artist himself, luminous illustrations, and a warm, celebratory spirit, this exemplary picture-book biography delivers a clear, sensitive portrait of the whole man, story and soul alike.”

* "Simple, folk-style paintings show Matisse in a wheelchair in a studio amid his collages; in a quiet visual cue, a plant with oversize leaves suggests inspiration for their big, organic shapes. He continues to create until his death, another moment Winter handles gracefully…. Old age can be fertile and useful, Winter implies; disability doesn’t mean the end of creating, and triumph is possible where only sadness could have been foreseen. All of these messages lie obliquely in the text, but even readers who don’t dig that deep will share Matisse’s joy."

“Winter captures the joy that Matisse found in cut paper, both through her acrylic and cut-paper illustrations and through quotes from his letters. The images are evocative of his art, with bright colors and rounded shapes…. The author addresses his death with a light touch…. Libraries with demand for picture-book biographies and art history will want to add this well-done title to their collections.”

"In her latest picture book biography...Winter focuses on Henri Matisse’s later life, during which the painter took up collage.... With text that is straightforward and unflowery, Winter relies, successfully, on the strength of her own art to capture the essence of Matisse’s. A brief author’s note explains her specific interest in this portion of the artist’s oeuvre."

"In her extensive picture-book–biography oeuvre, Winter has proven to be particularly attuned to selecting the just-right elements of her subjects’ complex lives while making them both accessible to and readily understood by young children.... Winter both describes and employs Matisse’s signature, late-career technique of brilliantly colored, hand-painted, cut-paper compositions. She enlivens the simple text with liberal yet judicious quotes from Matisse’s letters and comments from contemporaries. This is a beautifully designed book that will certainly connect with readers...the book is a charming introduction to a widely reproduced, child-friendly artist, one that children will assuredly encounter and affirmingly embrace."

“In ‘Henri’s Scissors,’ Jeanette Winter rushes through the story of Henri Matisse’s childhood, but no worries: it’s his second (far more interesting) childhood that fascinates her. After becoming one of the greatest artists of the 20th century, whose only peer, it could be argued, was the aggressively prolific Picasso, Matisse has grown old. Now infirm and confined to bed, he reflects on his past triumphs in a room colored in the deepest blues and purples. But inspiration strikes, and using a pair of common household scissors as his magic wand, Matisse cuts shapes out of brightly colored paper and transforms his sick-room into a mystical garden full of flowers and birds. Then, in the final and greatest feat of his career as artist-sorcerer, ‘the rainbow of shapes cradled the old artist and carried him into the heavens.’”

"The accessibility of cut paper makes it a particularly child-appealing medium, and Matisse is certainly the grand master of the art, so audiences will be pleased to see the championing of this oeuvre...the art is strong and vigorous, with a hat-tip to Matisse himself in the form of the open window (a famous Matisse subject) that allows the old man to view the sea; the playfulness and imaginative employment of actual Matisse collage shapes effectively convey the way art and life vision can blend together."

– The Bulletin of the Center for Children’s Books, October 2013

"The young reader gets a taste of Matisse’s art and a flavor of his creativity in the late period of his life.... Share this picture book biography with the art teacher. Incorporate the title in a story hour about imagination, color, or the beginnings of modern art."

SEE ALL
See more by Jeanette Winter
Thank you for signing up, fellow book lover!