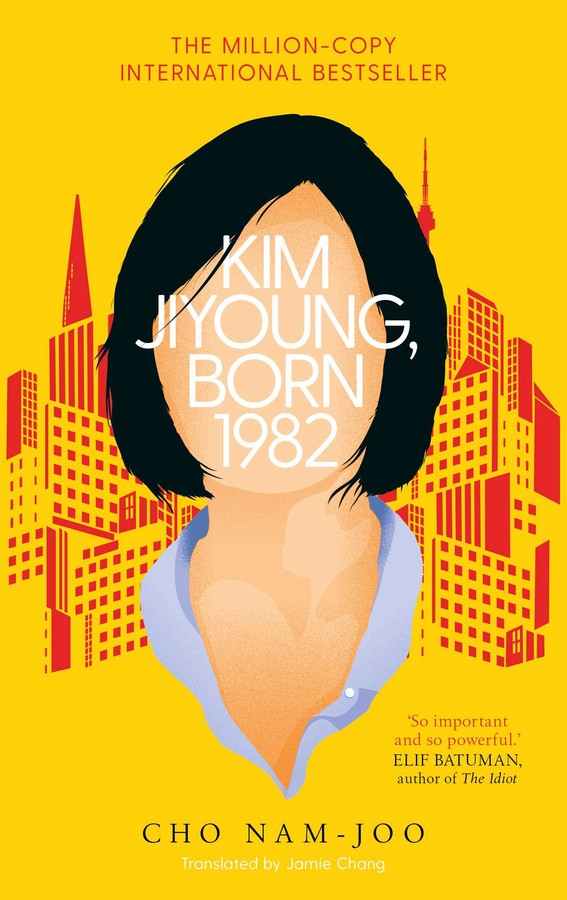 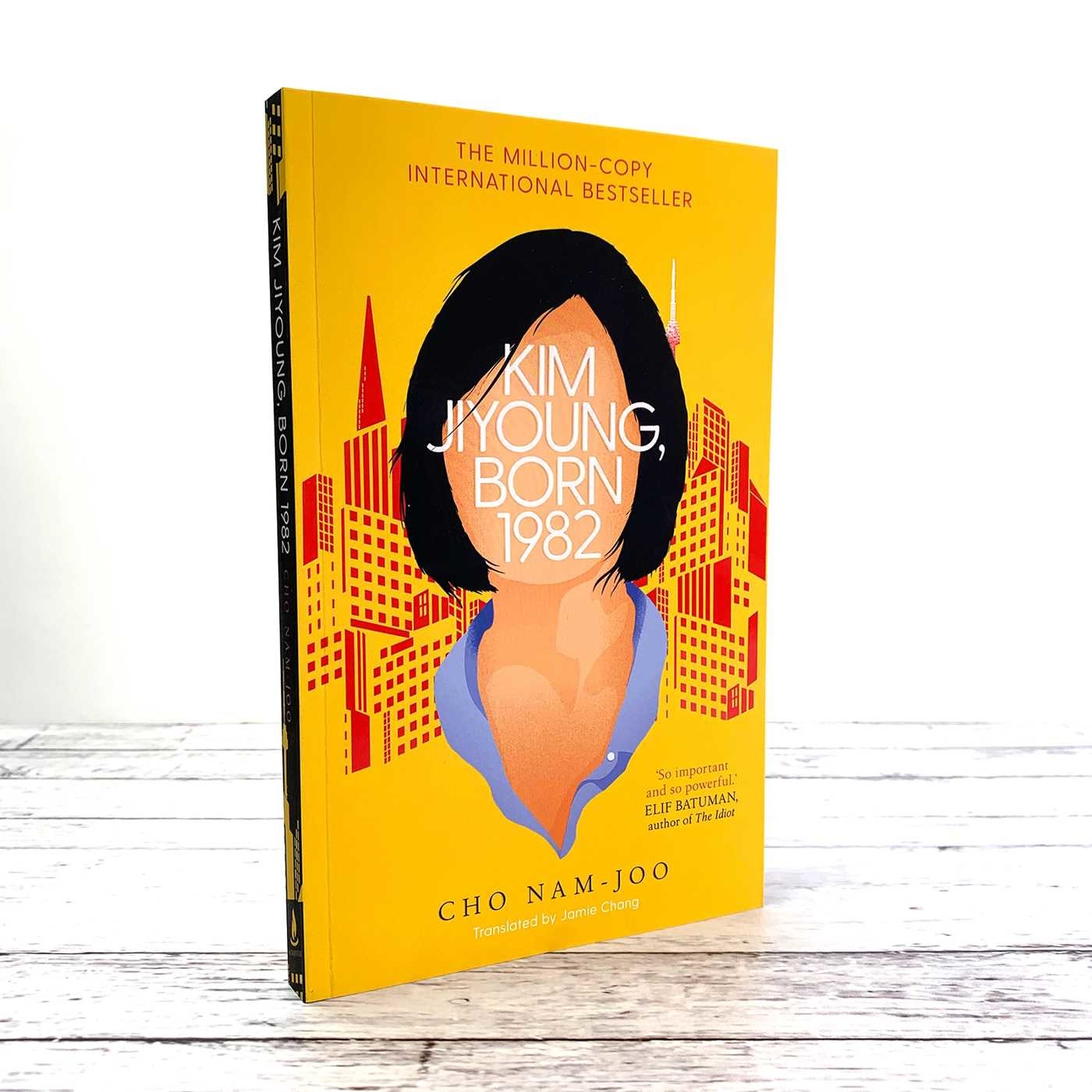 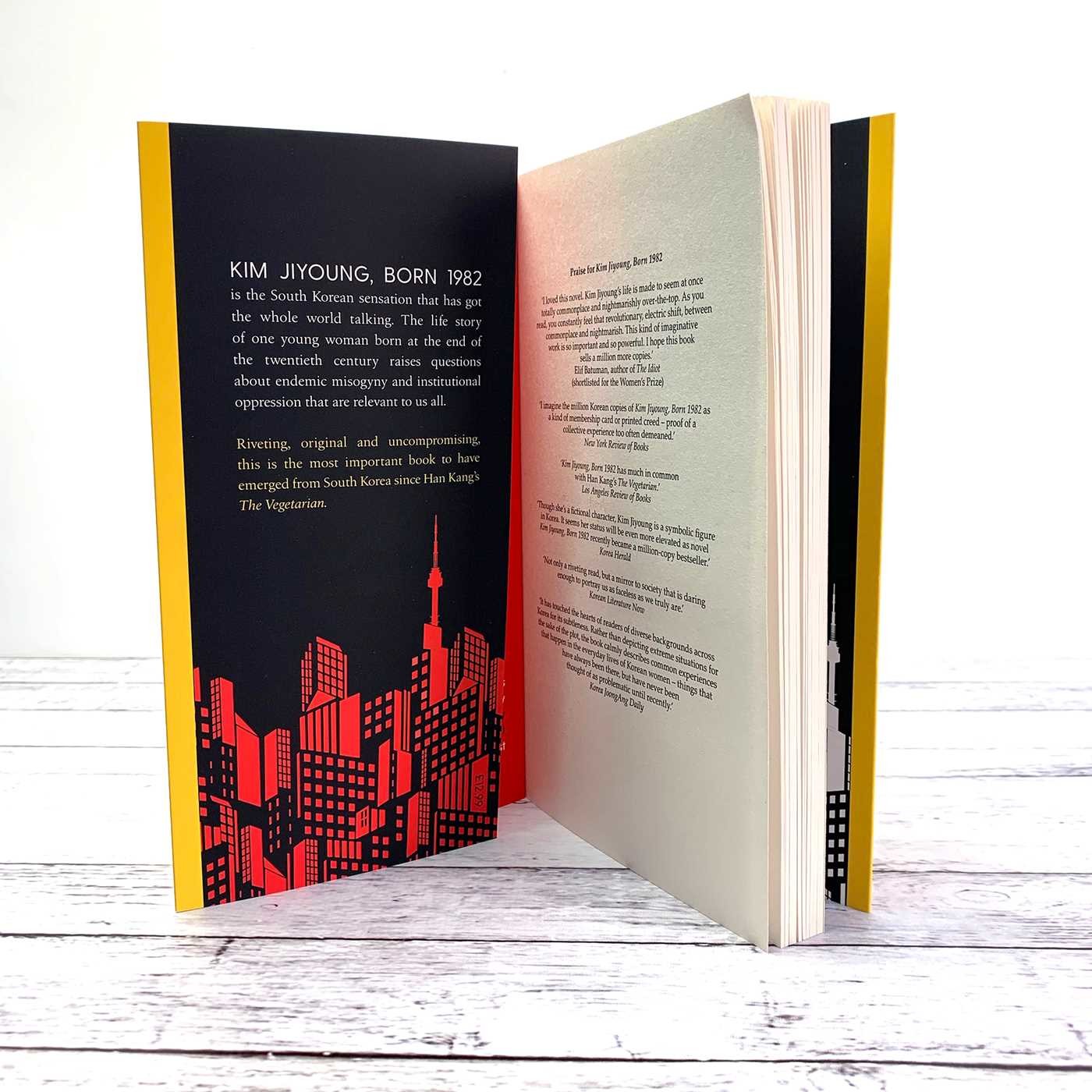 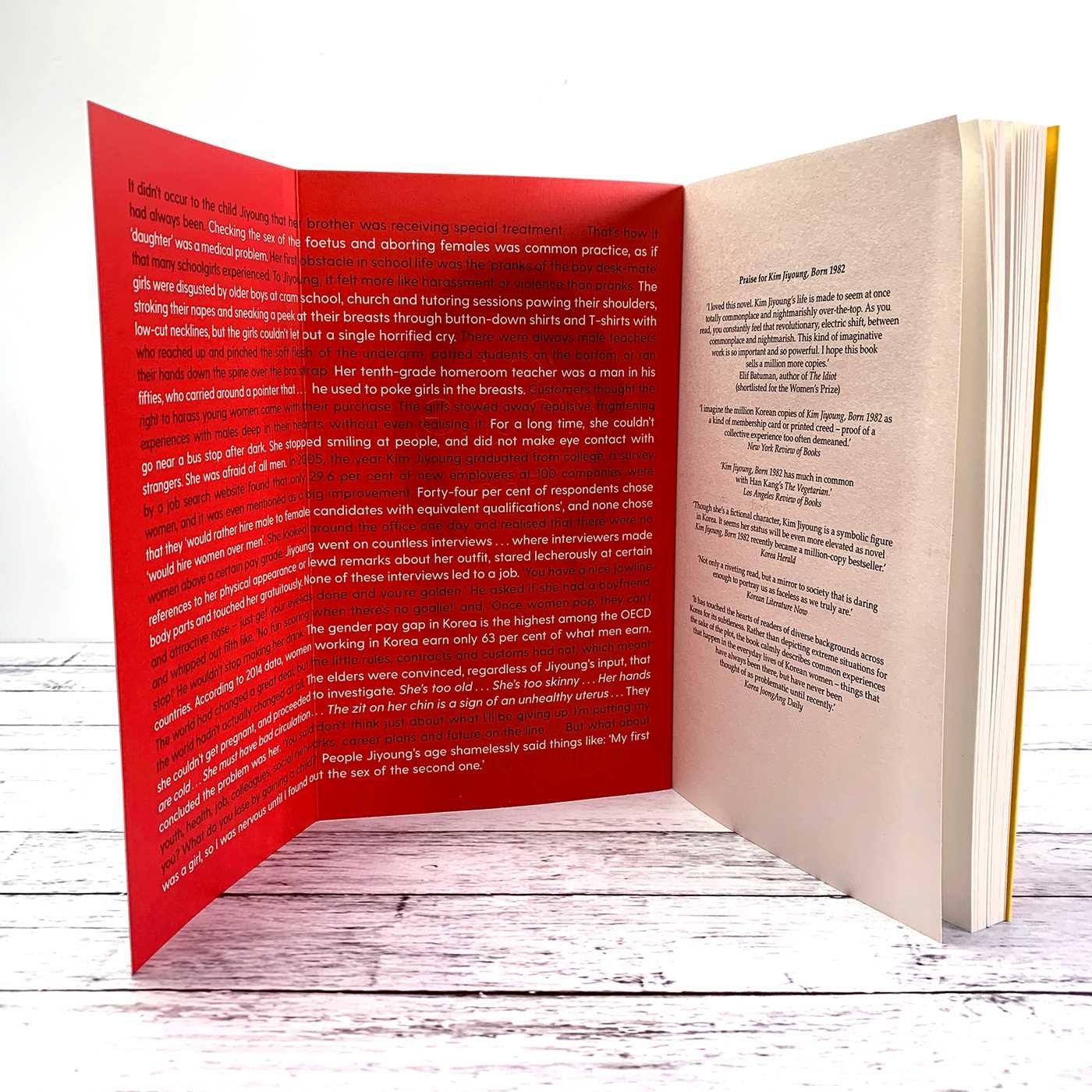 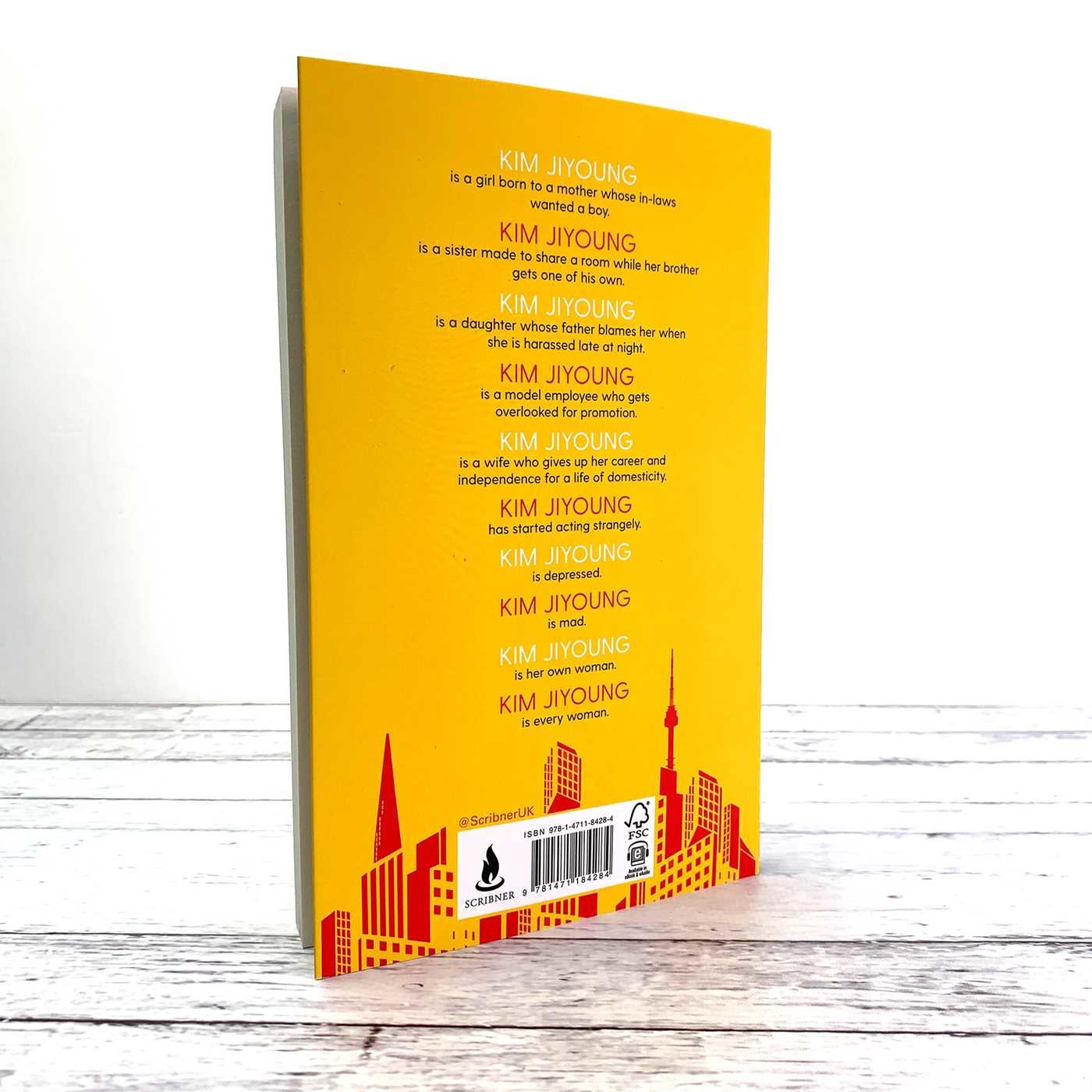 Kim Jiyoung, Born 1982 is the South Korean sensation that has got the whole world talking. The life story of one young woman born at the end of the twentieth century raises questions about endemic misogyny and institutional oppression that are relevant to us all.

Riveting, original and uncompromising, this is the most important book to have emerged from South Korea sinceHan Kang’s The Vegetarian.

“This is a book about the life of a woman living in Korea; the despair of an ordinary woman which she takes for granted. The fact that it’s not about ‘someone special’ is extremely shocking, while also being incredibly relatable.” Sayaka Murata, author of Convenience Store Woman

Kim Jiyoung is a girl born to a mother whose in-laws wanted a boy.

Kim Jiyoung is a sister made to share a room while her brother gets one of his own.

Kim Jiyoung is her own woman.

Kim Jiyoung is every woman.

'This witty, disturbing book deals with sexism, mental health issues and the hypocrisy of a country where young women are “popping caffeine pills and turning jaundiced” as they slave away in factories helping to fund higher education for male siblings.' The Independent

'A treatise and a howl of anger […] it describes experiences that will be recognisable everywhere. It’s slim, unadorned narrative distils a lifetime’s iniquities into a sharp punch. The books demonstrates the unfairness of the female experience and the sheer difficulty of improving it.’ The Sunday Times

Cho Nam-Joo
Cho Nam-joo is a former television scriptwriter. In the writing of this book she drew partly on her own experience as a woman who quit her job to stay at home after giving birth to a child. Kim Jiyoung, Born 1982 is her third novel. It has had a profound impact on gender inequality and discrimination in Korean society, and has been translated into 18 languages.

‘An all-too-familiar tale of a smart woman being slowly crushed by constant, inescapable sexism […] beneath the analytical detachment is a rolling rage that compellingly captures Kim Jiyoung’s frustrations’

‘Kim Jiyoung, Born 1982 is a novel of education, in more ways than one. Riffing with the bildungsroman form, Cho has created a heroine who, as her life progresses does not so much develop as unravel. The author’s particular achievement is in blending political and stylistic concerns in a cool tone carefully captured in Jamie Chang’s translation. […] In a culture which places the importance of the category “woman” over that of the individual “person”, we are invited to see Kim Jiyoung’s identity-erasing “insanity” as radical protest. Cho’s moving, witty and powerful novel forces us to face our reality, in which one woman is seen, pretty much, as interchangeable with any other. There’s a logic to Kim Jiyoung’s shape-shifting: she could be anybody’

‘A ground-breaking work of feminist fiction’

‘A touchstone for a conversation around feminism and gender […] The character of Kim Jiyoung can be seen as a sort of sacrifice: a protagonist who is broken in order to open up a channel for collective rage. Along with other socially critical narratives to come out of Korea, such as Bong Joon-ho’s Oscar-winning film Parasite, her story could change the bigger one’

‘A treatise and a howl of anger […] it describes experiences that will be recognisable everywhere. It’s slim, unadorned narrative distils a lifetime’s iniquities into a sharp punch. The books demonstrates the unfairness of the female experience and the sheer difficulty of improving it.’

'Jiyoung is no raging feminist, rather a passive vessel, which makes her eventual breakdown all the more powerful, while the calm, matter-of-fact prose style adds to the reader’s growing sense of disquiet.'

'To read the book is to imagine being a restive, aggrieved millennial and to trace her path through everyday misogyny.'

'I loved this novel. Kim Jiyoung’s life is made to seem at once totally commonplace, and nightmarishly over-the-top. As you read, you constantly feel that revolutionary, electric shift, between commonplace and nightmarish. This kind of imaginative work is so important and so powerful. I hope this book sells a million more copies.'

– Elif Batuman, author of The Idiot (shortlisted for The Women's Prize)

'After reading Kim Ji-young, Born 1982, I started to think about things in a way I hadn’t thought about them before. It reminded me of the unfair treatment I had experienced being a woman and I felt like I was caught off guard.'

'A book with unique implications; I was so impressed.'

'Written with unbearably clear-sighted perspective, Kim JiYoung, Born 1982 possesses the urgency and immediacy of the scariest horror thriller — except that this is not technically horror, but something closer to reportage. I broke out in a sweat reading this book.'

'A fierce and powerful look at modern day Korean society through the lens of a refreshingly new protagonist.  Born in 1982, Kim Jiyoung wins us over with her tolerance and strength. She is every one of us who has been invisible.'