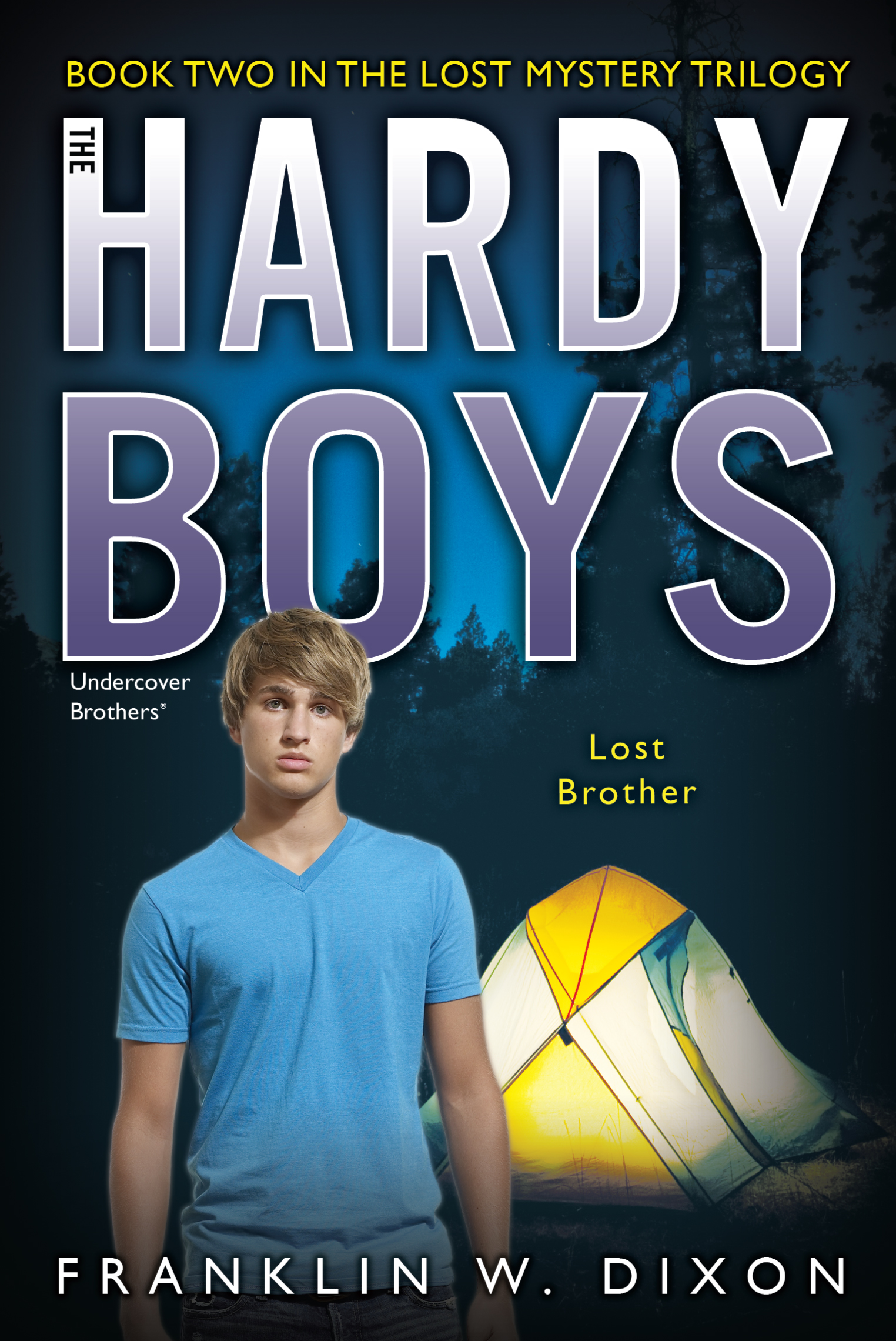 In the second book of this gripping trilogy, Frank has gone missing in the woods and it’s up to Joe to stop his brother from becoming one of the LOST!

I was running for my life. It was so dark I could barely see two steps ahead of me. The woods were alive with nighttime sounds—insects buzzing, owls shrieking overhead, the rush of a river somewhere nearby. But the only sound I could focus on was behind me.

It was huge. When I glanced back, the beast’s red-tinged eyes glowed at me out of the darkness.

I pushed myself to run even faster. My lungs and muscles burned.

“Ow!” I shouted as my elbow banged into a tree, sending fireworks of pain through my body.

The bear behind me let out a terrifying roar. The sound echoed through the forest.

AROOOOOOOO! “Wolves!” I blurted out in disbelief.

No way. Like being chased by a bloodthirsty bear wasn’t bad enough?

But there it was again. The bone-chilling howl.

I ran faster. The wolves kept wailing, sounding closer all the time.

The trail fell away before me. I skidded down a steep hill, trying not to twist an ankle. If I did, I was dead.

At the bottom of the hill, I found myself at the edge of a lake. Its broad, rippled surface gleamed in the moonlight. How far away was the opposite shore? I couldn’t tell.

The bear was almost on me. What choice did I have? I dove in and started to swim. The water was ice-cold.

By the time I reached the far shore, I was shivering and exhausted. I staggered up onto dry ground, hoping I’d outrun the predators at last.

I spun around. The bear was just lumbering out of the water! Behind it, I could see the wolf pack swimming fast to catch up. Then an otherworldly cry came from somewhere off to the left. Glancing that way, I saw a mountain lion perched on a ledge, staring down at me.

As the big cat leaped down and bounded toward me, I spun around and started running again. My legs felt like waterlogged bags of sand. I knew I wouldn’t be able to outrun all those animals for long. But I couldn’t give up. An ATAC agent never gives up. . . .

Uh-oh. Sounded like my cell phone. I was too busy to answer at the moment, but I was pretty sure I knew who was calling. It had to be ATAC HQ. They were probably checking in to see if Joe and I had made any progress on our mission yet.

“Joe,” I murmured, my already thudding heart skipping a beat. Where was my brother?

As I ran, I searched my mind for the answer. Why didn’t I know where Joe was? Had the animals gotten him? How had I ended up here, anyway?

Okay. This was weird. Why couldn’t I remember where I was or what was happening? It just didn’t make sense. . . .

Whew! It had been a dream! The grizzly, the wolves, the mountain lion, the crazy chase, all of it.

“Oh, man,” I murmured, my voice sounding hoarse in the darkness. It was so dark I couldn’t see my hand in front of my face.

I reached out, feeling for my alarm clock to hit the off button. My hand hit something hard and unyielding. A wall. A concrete wall? Hmm. That was weird.

I blinked, trying to help my eyes adjust. No dice. I still couldn’t see a thing.

That was weird too. My bedroom was never completely dark even at midnight, thanks to the neighbors’ porch light. What time was it, anyway?

Lifting my left arm, I was surprised not to see the familiar glow of my ATAC-issue watch. It glows in the dark unless I hit the little button to deactivate that feature. Had I done that before going to sleep?

I felt my left wrist with my other hand. It took a few minutes. For some reason my arms were being a little slow to respond to my brain’s commands. I was feeling pretty groggy overall, actually. I figured I must have been deep, deep asleep when I’d been awakened.

Okay, the buzzing was getting annoying now. Also, I was slowly realizing something else. My alarm clock didn’t buzz. It made a sound like a rooster crowing—my aunt Trudy’s idea of a fun birthday gift. Joe always said it sounded like a barnyard next door.

That thought helped wake me up a little more. Where was I?

I tried to shake the grogginess from my mind. But it wasn’t working. I felt as exhausted as if I really had just outrun all those animals from my dream. It didn’t help that I also had a raging headache.

“Focus, Frank,” I murmured to myself. Speaking out loud, hearing my own voice, actually made me feel a little more alert. So I kept it up. “My name is Frank Hardy. I live in Bayport, outside New York City. I’m an ATAC agent with my brother Joe. Our latest mission is to investigate a series of disappearances in Misty Falls State Park in Idaho. . . . Oh!”

I blinked in the darkness as the memories began to ooze back into my brain. I wasn’t at home. I was on an ATAC mission. Wasn’t I?

Still feeling fuzzy, I searched my mind for the details.

It had all started in the usual way. ATAC had contacted us about the mission. Dad had helped run interference with Mom and Aunt Trudy, who didn’t know about ATAC. Dad knows, of course, since he started the group. ATAC—American Teens Against Crime—sends teenage agents out to investigate cases where adults might raise suspicion. In this case, we were posing as students writing a paper on a series of missing kids known as the Misty Falls Lost.

Joe and I had flown out to Misty Falls, Idaho, and met Detective Richard Cole, who had filled us in on all the details. Over the past twelve years, eight children had disappeared while camping at the ruggedly beautiful state park. One of the kids’ remains had turned up later in a bear cave, though none of the others had ever been found. Still, most people had seemed willing to believe they’d all fallen prey to wild animals or other natural causes.

Until one of the kids returned.

“Justin Greer,” I murmured, the name swimming out of the fog in my mind.

Joe and I had been called in when Justin, one of the Misty Falls Lost, had turned up with no memory of who he was or where he’d been for the past dozen years. His reappearance had reopened the case, and things had only gotten weirder from there.

But nothing quite as weird as this. Where was I?

I squeezed my eyes shut, trying to focus. The last thing I could remember was being at our campsite in the park. A big grizzly had turned up and taken a swipe at Joe.

Panic grabbed at me again. I didn’t know the answers to any of those questions, and I didn’t like that feeling. I like knowing what’s going on, having all the facts in order. It’s kind of my thing.

I realized the buzzing noise had finally stopped. That was a relief.

Shoving back the scratchy blanket, I carefully swung my feet around, searching for the edge of the bed I was on. When I felt cool metal beneath my hands, I realized it was more like a cot.

My feet touched a hard, cool, smooth floor. I pushed off with my arms, staggering to my feet. It was still too dark to see anything, so I felt my way around.

Smooth concrete walls forming a room about six feet square. The cot. The outline of a door, tightly closed with no handle and only a tiny slit of a window at around eye level.

Nothing else. No light switch, nada.

I stood there in the darkness, swaying slightly and trying to think through the fuzz still coating my mind. My ATAC training had prepared me for a lot. But not for anything like this.

Feeling my way back over to the door, I peered through the little window. Or tried to, anyway. I couldn’t see a thing.

That pushed my panic up another notch.

“Help!” I shouted, pounding on the door. “Somebody! Where am I? Help! Let me out of here!”