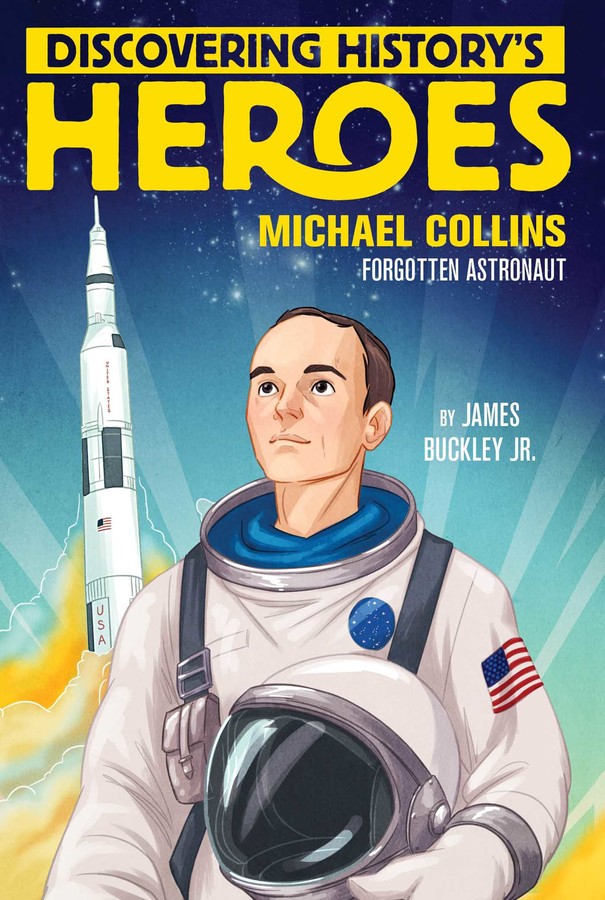 Jeter Publishing presents the second nonfiction biography in a brand-new series that celebrates men and women who altered the course of history often without recognition.

On July 16, 1969, a Gemini rocket lifted off from Kennedy Space Center in Florida. Previous launches had focused on getting astronauts into space, docking two spacecraft, and even walking in space, but this mission was different. Apollo 11 was designed to land two astronauts on the moon and then bring them back to Earth. Four days later, two astronauts, Neal Armstrong and Buzz Aldrin, did walk on the moon. But did you know that there were actually three astronauts aboard the rocket on July 16? Michael Collins didn’t get to walk on the Moon, but his contribution is just as important as Armstrong and Aldrin’s.

Prior to joining NASA, Collins was in the Air Force and flew fighter jets. After joining NASA, he made two trips into space, performing one of the first EVAs or Extravehicular activities (in other words, walking in space) as well as making that trip to the moon.

Collins continued to contribute even after leaving the space program. He took a job in the State Department and even served as director of the National Air & Space Museum and as undersecretary of the Smithsonian Institution in Washington, DC.

He may not have walked on the moon, but he’s one of only twenty-four people to travel there. In fact, without Michael Collins, that first moon landing might never have happened.

Michael Collins 1. A YOUNG WORLD TRAVELER
When he was a kid, Michael Collins didn’t grow up wanting to be an astronaut. There was a good reason for that. There were no astronauts when he was a kid. In fact, the first airplane had flown just twenty-seven years before his birth. When he was born, flying to the moon was something you read about in science fiction. It was not something you thought could be your job.

Later in his life, Collins did fly around the world, in more ways than one. He was born on Halloween, October 31, 1930, in Rome, Italy. That didn’t make him Italian, though. His father, Major General James Lawton Collins, was an officer in the United States Army. He had been one since before World War I. One of his first assignments had been to help the famous General John “Black Jack” Pershing chase down a Mexican bandit called Pancho Villa. James Collins then served in World War I. As Collins rose through the military ranks, the army sent him to different posts around the world. His family went along with him. Michael was very young when his family left Italy. They moved to Oklahoma first, then soon moved again, this time to New York City. Military families in the city lived on Governors Island. Michael could see the Statue of Liberty from there, as well as the skyscrapers of Manhattan.

Next stop was San Antonio, Texas. It was in Texas that Michael says he first started loving airplanes. He would sit and watch them take off and land at a small airfield near his house. He wondered what it would be like to be up there in the sky. He also started building model airplanes. His first was a one-seat racing airplane called a Gee Bee. He also enjoyed reading science fiction. “I was a big Buck Rogers fan and I used to prowl around in the caverns of Mongo,” the planet that was the scene of many of the fictional Rogers’s adventures.1

In 1940, General Collins became the head of army forces in Puerto Rico. The Collins family was on the move again. Michael loved his exotic new home. His family lived in a building called Casa Blanca, which means “White House.” This large white home was one of the oldest buildings in the Americas. People had lived in it since 1530!

Puerto Rico amazed Michael. There he saw animals such as lizards and tropical fish. His house had a huge garden, too, filled with wild green plants. He also learned tough lessons when he ate local foods that did not agree with his American stomach.

In Puerto Rico the airplane-loving boy finally got to ride in the sky. He and his father got a ride in a Grumman Widgeon. (A widgeon is a type of duck.) Michael got to sit in the copilot’s seat and even steered the plane for a few moments. It was a thrill, and one he looked forward to repeating.

In 1941 the United States entered World War II. The army needed experienced officers to help run the war. General Collins was called to work in Washington, DC, at the Pentagon. That’s the headquarters of the US armed forces. The Collins family left beautiful Puerto Rico behind and once again followed General Collins as he served his country. Michael’s father wasn’t the only one in the family to serve his country in this way. Michael’s older brother, James, was by then a cadet at West Point, the United States Military Academy; and General Collins’s brother Joseph was one of the senior commanders in Europe during World War II. Michael also had two sisters, Virginia and Agnes. The family lived in Virginia, outside DC.

Michael attended high school at St. Albans, a small private school. He was a good math student and was also on the wrestling team. He was not a big teenager, more on the skinny side. But he loved the action of sports and played on the offensive line for the football team.

After high school there was really only one place that Michael wanted to go. He wanted to continue a family tradition and serve his country. His good grades and family connections helped earn him an appointment to West Point.

The US Military Academy

America trains its army officers at this school in West Point, New York. The school first opened in 1802 on the banks of the Hudson River. Students are called cadets and are actually junior army officers when they start school. They study science, literature, and math but also military history and leadership.

When they graduate, they have to serve at least five years in the military.

Other branches of the military have their own schools. The US Naval Academy is in Annapolis, Maryland. The US Air Force Academy is in Colorado Springs, Colorado. And the US Coast Guard Academy is in New London, Connecticut.
James Buckley Jr.

James Buckley Jr. is a prolific author of nonfiction for young readers. Bonnie and Clyde joins a long list of his biographies that cover Adolf Hitley, Milton Hershey, Betsy Ross, Jesse Owens, Muhammad Ali, and Roberto Clemente, among many others. Other recent books include titles on the International Space Station, the Moon, snakes, insects, firefighters, history, and sports of various kinds. That latter subject is a big part of his work, following on a career in sports journalism with Sports Illustrated and the National Football League. He is the owner of Shoreline Publishing Group, a book packager based in his home of Santa Barbara, California, where he lives with his wife and two teenagers.