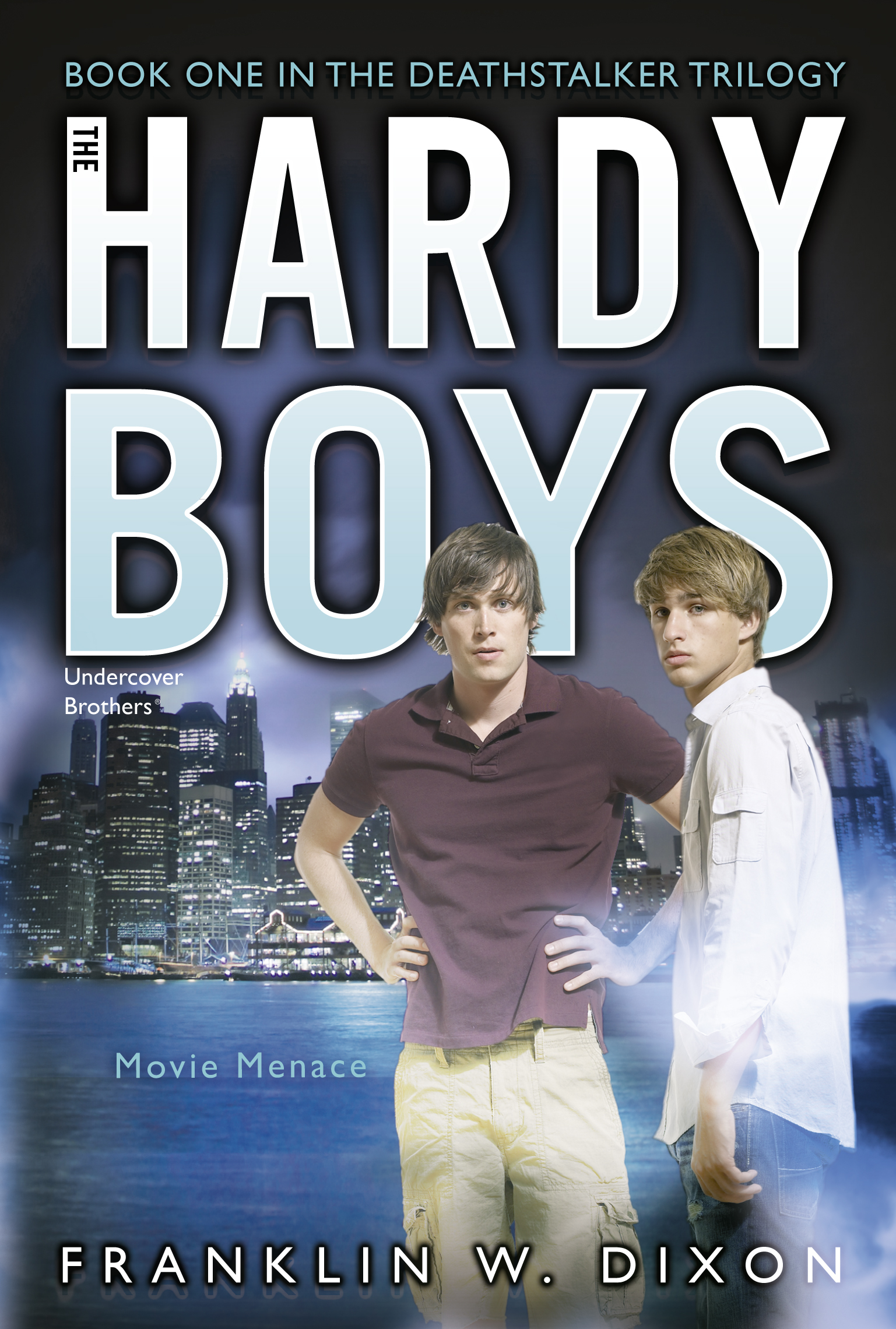 Book One in the Deathstalker Trilogy

Frank and Joe Hardy are assigned to pose as extras on the set of the an upcoming teen movie, Deathstalker. The star, an ingenue named Anya, believes that someone is out to get her--and she's got proof. Someone tried to burn down her trailer! The Undercover Brothers need to get to the bottom of the arson, and other mayhem surrounding the filming of the hit comic book. The first book of the next exciting trilogy!

Speedy Delivery
“Hold on!” I shouted at my brother.

I hauled the wheel around. The sleek little motorboat skidded into the turn, its hull bouncing against the choppy, windswept water of the Chesapeake Bay.

The boat we were chasing was now racing straight toward the wooded shoreline. For one crazy second I thought the driver might keep going and ram the hull right up onto the rocky beach.

Then, with seconds to spare, he pulled it around to the left. The boat skimmed along the swells, running parallel to the shore.

“Whoa!” my brother Frank yelled. He clung to the side of our boat. “The water’s way too shallow there! Turn now, Joe. We’ll have to wait for them to come back out here.”

He was right. Frank usually is. He’s a smart guy; everyone says so.

But I wasn’t about to let these lowlifes jump out and swim to shore. They’d disappear into the woods before I could get our boat turned around.

Frank yelled something else. I didn’t hear him. For one thing, the motor got even louder as I eased it into another turn. For another, I was totally focused on that other boat.

There were two guys in it. One was bent over the wheel. The other glanced back at us.

He looked angry. Teenage drug runners usually do when they know they’re about to get caught.

I let the motor out another notch.

“This is crazy!” Frank’s voice broke through my focus. He sounded freaked out. Nerdy older brothers usually do when their studly, fearless younger brothers are doing something gutsy. “If they don’t get in deeper water stat, they’re going to—”

The noise hit me first. The sight seemed to happen in slow motion.

I saw the boat ahead of us stop short.

No, not quite stop.

It sort of crumpled, then the stern of the boat flew upward. It flipped over in midair …

My slow-motion vision ended as the overturned boat hit the water. I heard Frank yelling again, but I ignored him. I was busy hauling the wheel to the left, trying to turn our boat before we smashed into the wreck.

“Too late!” I yelled, realizing there was nothing I could do. Not unless I suddenly figured out a way to beat the laws of physics.

I let go of the wheel and dove for the edge of the boat. I could only hope that Frank caught on and followed. Like I said, he’s a smart guy. But sometimes he’s too cautious, a little too slow to act….

“Jump!” I cried as I flung myself over the boat’s edge.

Oof. I belly flopped into the water. The wake of our speeding boat spun me around like a washing machine beating up on a pair of dirty socks. I wasn’t sure which way was up.

Even though I was still underwater, I felt the shudder as our boat hit the wreckage.

The water rippled with the force of the explosion, sending me on a few more rotations.

I fought my way to the surface, squinting to get the murky water out of my eyes. Frank. Where was Frank? Had he made it off the boat in time?

“I told you not to get so close to shore,” a familiar voice said from a few feet behind me.

Whew! I’d never been so glad to hear one of Frank’s I-told-you-so’s.

“What happened to those guys?” I asked, treading water as I tried to get my bearings. “Think they survived that smashup?”

“Probably.” Frank peered at the floating, smoking wreckage. “Their boat just hit some rocks. Nothing exploded until ours crashed into theirs. They’re probably still trying to get away.”

Frank knew we weren’t exactly dealing with a couple of geniuses. After all, geniuses wouldn’t be making their living smuggling drugs and selling them to little kids.

“Let’s go find them.” I struck out for the wreckage.

I’d only swum a few yards when I saw one of the non-geniuses. He was clinging to a piece of hull. His buddy was treading water nearby.

Frank saw them too. “Stop right there!” he yelled.

The geniuses ignored him and took off toward shore. No big surprise there. Criminals hardly ever obey when you yell at them to “stop right there.” At least not in my experience. And I have plenty. After all, Frank and I have been ATAC agents since our dad started the agency.

But more on that later.

I dove under and kicked forward, aiming at one of the drug runners. Oof! One of his feet clocked me in the side of the head. Yeah, that was going to leave a bruise.

He kicked his feet harder as he swam away faster. Or tried to, anyway. I grabbed one of his ankles and held on tight. When my head popped out of the water, I heard the guy cursing and sputtering.

Frank didn’t answer. I looked over and saw him struggling with the other guy. Frank was trying to get him in a hammerlock, but the guy kept landing punches. They weren’t very hard ones, but still.

“Hey!” I blurted out as I felt my guy wriggle loose. He yanked his foot away and kicked me in the thigh, then took off. Who knew drug runners were such fast swimmers?

“Get him!” Frank yelled. Then he gurgled. Uh-oh. His guy had just dunked both of their heads underwater.

Time for a new plan. I had to think fast.

“Whoa!” I yelled as loudly as I could. “Watch out for that shark!”

Okay, it was kind of a lame plan. But it was all I had at the moment.

And it worked. Frank’s guy stopped fighting and looked around goggle-eyed. That gave Frank the chance to get him in that hammerlock.

My guy started spinning around in a panic, looking for the shark. Two quick strokes and I was on him.

“Yeah,” I muttered as I struck off toward shore, yanking the guy behind me. “Real geniuses.”

“That might be a record,” Frank said as he rubbed his damp hair with a towel. “I don’t think we’ve ever completed a mission in a day and a half before.”

I was sprawled on one of the hotel room’s double beds. It was a pretty nice room. Too bad we’d only had one night to enjoy it.

“Yeah. Maybe we should spend a few days at the beach somewhere down the coast,” I said, only half joking. Okay, I admit it, maybe not even half. “I mean, why not? Mom and Aunt Trudy think this Young Diplomats Conference we’re supposed to be attending lasts almost two more weeks.”

“Somehow I don’t think ATAC’s going to go for that,” Frank said.

Yeah. I didn’t think so either.

In case you’re wondering, ATAC stands for American Teens Against Crime. My dad, Fenton Hardy, started the supersecret agency a few years back. Dad’s a retired PI who did a lot of undercover work in his day, and he realized there were times when an adult agent couldn’t blend in. Like at a BMX rally. In a mosh pit. At a high school prom. Places like that.

But a teenage undercover agent? Piece of cake!

And so ATAC was born. Frank and I were the first two teens to sign up. We’ve been fighting crime ever since.

Dad knows all about it, of course. Mom and Aunt Trudy? Not so much. It can be tough coming up with cover stories every time we take off on a mission. This time it was a fictional Young Diplomats Conference in Washington, D.C. What were we supposed to tell everyone when we returned home after two days instead of two weeks? That we weren’t diplomatic enough? They might believe I’d gotten myself kicked out. But not my brother, Mr. Straight-A-Eagle-Scout.

Really, that beach thing was sounding like more of a plan all the time. All we’d be left to explain was our tans. And didn’t we deserve a little R & R after solving the case so fast?

I rolled over and sat up. “We didn’t even get the chance to use our latest gizmo,” I said, lifting my hand. One of the cool things about working for ATAC is the gadgets. This time Frank and I had each gotten rings. Okay, that doesn’t sound very cool. But it was. These looked like ordinary class rings, the kind tons of high schoolers and college students wear. But they each contained a tiny, sophisticated GPS-type device. If Frank and I got separated, we’d be able to use the rings to track and find each other. Pretty important when you work as a team.

Frank glanced at his ring and shrugged. “Yeah. Maybe next mission.”

Just then there was a knock at the door. “Room service!” a muffled voice called from the hallway.

“We didn’t order anything,” Frank said. Then he shot me a suspicious look. “Did we?”

Frank was already hurrying toward the door. He swung it open. “Thanks,” he began. “But we didn’t …”

His voice trailed off. There was nobody there. But a tray topped by a silver dome had been left sitting in the hall.

I was kidding. At least I hoped so. Sometimes being an ATAC agent gives you a warped sense of humor.

“They must have dropped this food off at the wrong room,” Frank said.

“Yeah.” I pushed past him and grabbed the tray. “Let’s see what it is before we decide if we should return it. All that swimming made me hungry.”

I set the tray on a table and pulled off the domed cover. There were no burgers on the plate. No pizza. Not even a bologna sandwich. No bomb, either.

There was just a thin silver disk.

“Whoa,” Frank said. “Looks like we don’t have time to hit the beach after all. I think we just got our next mission!”
Franklin W. Dixon

Book One in the Deathstalker Trilogy