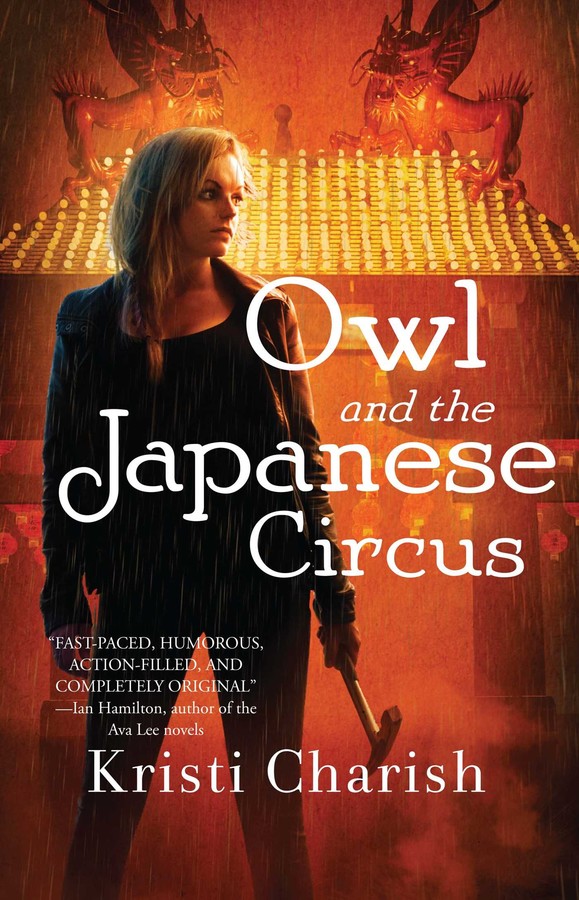 Owl and the Japanese Circus

Book #1 of The Owl Series
By Kristi Charish
LIST PRICE ₹320.00
PRICE MAY VARY BY RETAILER

Ex-archaeology grad student turned international antiquities thief, Alix—better known now as Owl—has one rule. No supernatural jobs. Ever. Until she crosses paths with Mr. Kurosawa, a red dragon who owns and runs the Japanese Circus Casino in Las Vegas. He insists Owl retrieve an artifact stolen three thousand years ago, and makes her an offer she can’t refuse: he’ll get rid of a pack of vampires that want her dead. A dragon is about the only entity on the planet that can deliver on Owl’s vampire problem—and let’s face it, dragons are known to eat the odd thief.

Owl retraces the steps of Mr. Kurosawa’s ancient thief from Japan to Bali with the help of her best friend, Nadya, and an attractive mercenary. As it turns out though, finding the scroll is the least of her worries. When she figures out one of Mr. Kurosawa’s trusted advisors is orchestrating a plan to use a weapon powerful enough to wipe out a city, things go to hell in a hand basket fast…and Owl has to pick sides.

Kristi Charish is a scientist and science fiction/fantasy writer who resides in Vancouver, British Columbia, with her spousal unit, Steve, and two cats named Captain Flash and Alaska. She received her BSc and MSc from Simon Fraser University in Molecular Biology and Biochemistry, and her PhD in Zoology from the University of British Columbia. Kristi writes what she loves: adventure heavy stories featuring strong, savvy female protagonists. Visit her at KristiCharish.com or follow her on Twitter @KristiCharish.

A great new fantasy series of fans of Indiana Jones and Buffy the Vampire Slayer...Here's to hoping this will be the first of many outings for Owl.

Adventure! Drama! Japanese radish demons! Dr. Kristi Charish in my zombie series is an evil bitch who conducts horrible experiments. But the real Kristi Charish is awesome and her debut novel releases tomorrow! And it's fantastic! Owl and the Japanese Circus! Go buy!

– Diana Rowland, author of My Life as a White Trash Zombie

Antiquities thief Owl is snarky, funny, and geeky—in the absolute best way possible. Her globe-trotting escapades are brimming with unique supernatural foes and comic-book cool. Urban fantasy fans will cheer Owl on to the thrilling conclusion and eagerly anticipate the next adventure. Go Owl!

– Jenn Bennett, author of Kindling the Moon and the Arcadia Bell series

Rich, stylish, and uber-geeky. A thrill-ride to the darkly glittering crossroads of myth and archeology.

Owl and the Japanese Circus

Book #1 of The Owl Series
By Kristi Charish
LIST PRICE ₹320.00
PRICE MAY VARY BY RETAILER

More books in this series: The Owl Series