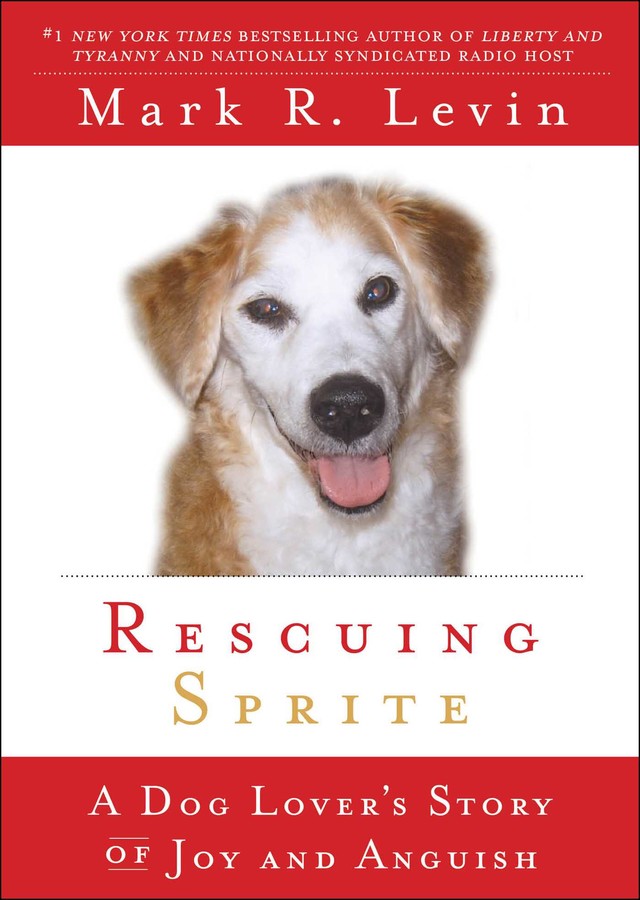 A Dog Lover's Story of Joy and Anguish

From the New York Times bestselling radio personality Mark Levin and his family comes the true story of the two years of joy and anguish they had with a rescue dog named Sprite.

Mark Levin, while known as a lawyer and nationally syndicated broadcaster, considers himself first and foremost a dog lover. In 2004, Mark’s family added a new member to their bunch—a beautiful, Spaniel-mixed dog they named Sprite. With his beautiful face and soft, huggable fur, Sprite immediately bonded with the Levin family.

But on Halloween night, just three weeks after being adopted, Sprite collapsed and had to be rushed to the animal hospital in what would turn out to be the first of many such visits—and a difficult, heart-wrenching journey for the entire family.

Over the next two years, Sprite’s health deteriorated, but his spirit remained high and his beauty and grace continued to inspire, until the holiday season of 2006, when the Levin family had to say a final goodbye to their beloved pet. Rescuing Sprite is a stunningly intimate revelation of the strong love that can develop between a family and a pet, and the realization, as Mark Levin puts it, that “in the end, we humans are the lucky ones.”

This reading group guide for Rescuing Sprite includes an introduction and discussion questions. The suggested questions are intended to help your reading group find new and interesting angles and topics for your discussion. We hope that these ideas will enrich your conversation and increase your enjoyment of the book.

Although Mark Levin is known as a lawyer and a nationally syndicated broadcaster, he is, first and foremost, a dog lover.

In 1998, he and his family welcomed into their lives a half-Border Collie/half-Cocker Spaniel they named Pepsi. Six years later, his wife and son persuaded him to adopt a 3- to 6-year-old Spaniel mix, the most beautiful dog they'd ever seen. They named him Sprite.

Sprite bonded with Pepsi and the Levin family, and they fell in love with him--with his gentle nature, his beautiful face and his soft, huggable fur.

But on Halloween night, three weeks after joining their family, Sprite collapsed and had to be rushed to the animal hospital. It was the first of many such visits and a long journey for the Levin family, filled with joy and anguish.

Throughout the next two years, Sprite's bond with the Levin family deepened, as it did with their friends and neighbors. A relationship also developed with Mark's radio audience. As Mark's daughter turned 18 and graduated from high school and Mark's son turned 15, Sprite's health deteriorated, even as his spirits remained high and his beauty and grace continued to inspire.

Comfort came from family and fans and friends, including Mark's fellow radio hosts Rush Limbaugh and Sean Hannity. And between Thanksgiving and Christmas 2006, the Levin family said their final goodbye.

Rescuing Sprite is a stunningly intimate look at the love between a family and a dog, one that movingly shows, in Mark Levin's words, that "in the end, we humans are the lucky ones."

1. Pepsi comforts Mark immensely after his heart problems, and Mark credits the dog for helping him to recover. Years later, the situation is reversed when Mark and his family must help their other dog, Sprite, through his health issues. How is the emotional support that a person gives a dog different from the support a dog gives a person?

2. Do you blame Mark and Kendall for avoiding the talk about end-of-life care for Sprite for so long? Do you think it would have helped them deal with the situation more if they had talked about it openly?

3. Why does talking with Rush about Sprite’s failing health make Mark reevaluate his life, his accomplishments, his religion?

4. On page 112, Mark says, “I had also lost people and animals I loved before, but this was different.” Why was facing Sprite’s mortality so different than Mark’s previous experiences with death?

5. Do you think it was wrong for Mark hold back Sprite’s deteriorating condition from Lauren when they were in the Bahamas? Would you have done the same thing?

6. After Sprite’s death, Mark is overwhelmed with depression and guilt for months. He feels that there must have been something he could have done to save the dog, and wishes he had further pursued the MRI when Sprite had collapses on Halloween. Are regret and guilt inevitable when one is faced with an extraordinary loss?

7. Mark and Kendall lied to Lauren when she had asked how Sprite was doing, and only told her what had happened when she returned home. Was it wrong for them to lie to her, especially since her brother knew the truth, or was it appropriate to wait until they could tell her in person?

Mark R. Levin, nationally syndicated talk-radio host, host of LevinTV, chairman of Landmark Legal Foundation, and the host of the FOX News show Life, Liberty, & Levin, is the author of six consecutive #1 New York Times bestsellers: Liberty and Tyranny, Ameritopia, The Liberty Amendments, Plunder and Deceit, Rediscovering Americanism, and Unfreedom of the Press. Liberty and Tyranny spent three months at #1 and sold more than 1.5 million copies. His books Men in Black and Rescuing Sprite were also New York Times bestsellers. Levin is an inductee of the National Radio Hall of Fame and was a top adviser to several members of President Ronald Reagan’s cabinet. He holds a BA from Temple University and a JD from Temple University Law School.

A Dog Lover's Story of Joy and Anguish