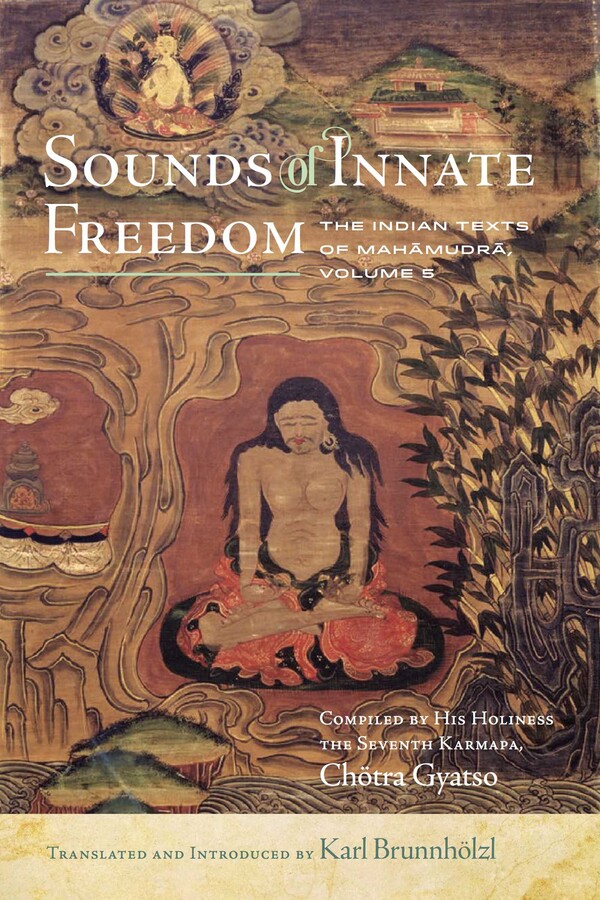 The Indian Texts of Mahamudra, Vol. 5

The first volume in an historic and noteworthy 6-volume series containing many of the first English translations of the classic mahamudra literature compiled by the Seventh Karmapa.

Sounds of Innate Freedom: The Indian Texts of Mahamudra is an historic six-volume series containing many of the first English translations of classic Mahamudra literature. The texts and songs in these volumes constitute the large compendium called The Indian Texts of the Mahamudra of Definitive Meaning, compiled by the Seventh Karmapa, Chötra Gyatso (1456–1539). Mahamudra refers to perfect buddhahood in a single instant, the omnipresent essence of mind,  nondual and free of obscuration. This collection offers a brilliant window into the richness of the vast ocean of Indian Mahamudra texts, many cherished in all Tibetan lineages, particularly in the Kagyü tradition, giving us a clear view of the sources of one of the world’s great contemplative traditions.

This first volume in publication contains the majority of songs of realization, consisting of dohas (couplets), vajragitis (vajra songs), and caryagitis (conduct songs), all lucidly expressing the inexpressible. These songs offer readers a feast of profound and powerful pith instructions uttered by numerous male and female mahasiddhas, yogis, and dakinis, often in the context of ritual ganacakras and initially kept in their secret treasury. Displaying a vast range of themes, styles, and metaphors , they all point to the single true nature of the mind—mahamudra—in inspiring ways and from different angles, using a dazzling array of skillful means to penetrate the sole vital point of buddhahood being found nowhere but within our own mind.

The beautifully translated texts brilliantly capture the wordplay, mystical wonder, bliss, and ecstatic sense of freedom expressed by awakened Mahamudra masters of India. It includes works by Saraha, Mitrayogi, Virupa, Tilopa, Naropa, Maitripa, Nagarjuna, the female mahasiddhas princess Laksmimkara and Dombiyogini, and otherwise unknown awakened figures of this rich tradition. Reading and singing  these songs that convey the inconceivable and contemplating their meaning in meditation will open doors to spiritual experience for us today just as it has for countless practitioners in the past.

"With these vivid renditions of the songs of the Indian mahasiddhas, Karl Brunnhölzl brilliantly launches what is certain to be one of the great Buddhist scholarly projects of our time: a complete six-volume English translation of the Indian works foundational to the theory and practice of mahamudra, the great sealing of the nature of mind, which is one of the most significant and widespread of all Tibetan meditation systems. These volumes—which will be a landmark in our quest to comprehend Indian tantric Buddhism and the Tibetan great-seal practice—are sure to captivate scholars and practitioners alike."

"Making this classic collection of mahamudra literature available in English for the first time is a historic moment, and we have a lot to thank Ponlop Rinpoche for in suggesting this work and encouraging Karl Brunnhölzl to complete it. He couldn’t have chosen a more competent translator and scholar for the task, added to which Karl is a devoted practitioner who wholeheartedly embraces the spirit of the tradition. The songs are inspirational, and to reflect deeply on just one or two would already be a feast. Many are extremely technical and others obscure, so I particularly appreciated the clear explanations of the context and meaning both in Karl’s introductory essay and his footnotes."

– Lama Shenpen Hookham, founder and principal teacher of the Awakened Heart Sangha, There's More to Dying Than Death, and Keeping the Dalai Lama Waiting and Other Stories

"This magnificent volume of The Indian Texts of Mahamudra reveals the profundity, richness, and mystery that comes when male and female siddhas express their realization of mahamudra. Beautifully translated by the wonderfully talented Karl Brunnhölzl in a direct, accessible way, we are treated to a panoply of texts, ranging from clear, practical instructions to cryptic yet inspirational tantric poetry. This is a veritable feast to be savored by all who aspire to mahamudra, scholars and practitioners alike."

"I am delighted by the publication of this thoughtfully compiled collection of classic Mahamudra literature. It is wonderful that these ancient songs of realization, in all their profundity and beauty, are now accessible to modern English readers everywhere."

The Indian Texts of Mahamudra, Vol. 5