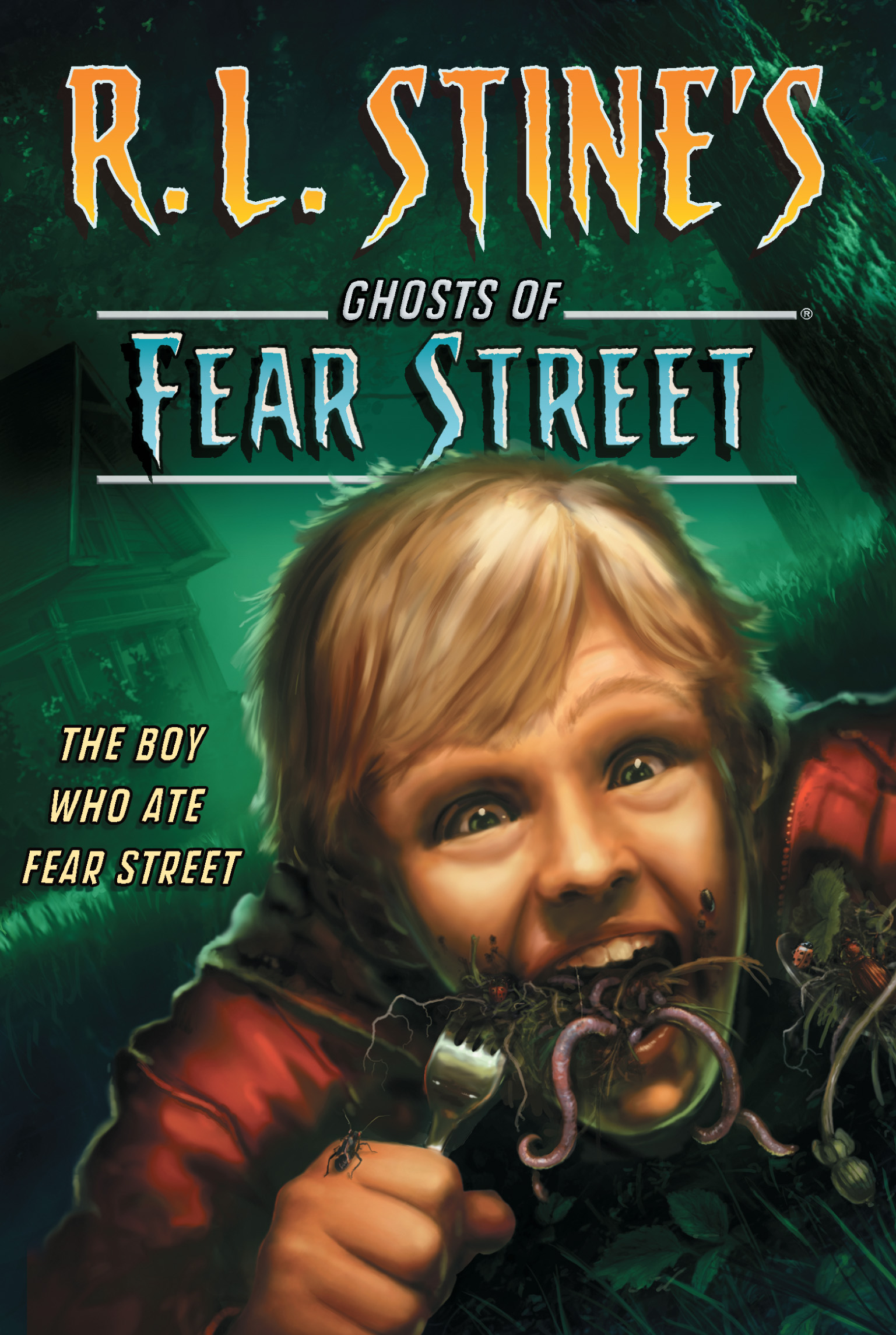 The Boy Who Ate Fear Street

Sam Kinney used to be a very picky eater. But after a friend’s eccentric Aunt Sylvie put a weird spice in his mac and cheese, suddenly, Sam can’t stop eating. Paste and pepper. Dishwashing soap. Even dog food. Sam has to find out what is making him eat...and eat...and eat. Before he eats his house. And all his friends on Fear Street…

The Boy Who Ate Fear Street 1


“Sam, you have to come over right now,” my best friend Kevin pleaded with me over the phone.

“For the tenth time, Kevin—I’m not coming over if you don’t tell me why.”

“I already told you,” Kevin replied. “I can’t tell you. Then it wouldn’t be a surprise.”

My name is Sam Kinny, and the first thing you should know about me is—I hate surprises. Why? I don’t know why. I just do.

Another thing I hate is when people pinch my cheeks.

Mom and Dad’s friends are always pinching my cheeks. Some of my teachers do it too. Maybe it’s because I have a totally round face, straight blond hair, big blue eyes, and long eyelashes. And worst of all, my cheeks are really rosy. Everyone says I’m soooo cute. Then they pinch my cheeks.

Nobody ever pinches Kevin’s cheeks. Kevin looks tough—just the way I want to look.

Kevin has brown hair and it always looks messy. And he has a little scar on his right cheek, where his sister Lissa scratched him accidentally while they were practicing karate.

“Sam, you have to come over,” Kevin begged. “My mom started dinner—and she’s cooking all your favorites.”

“Really?” I asked. “Macaroni and cheese? And rice pudding for dessert with white raisins and marshmallows?”

“What do you mean, as usual?” I protested. “I don’t always eat white food.”

“Oh, yeah?” Kevin challenged me. “Name one food you eat that isn’t white. Come on, name one.”

Okay. What can I say? Kevin was right. I eat only white food. Why?

I know the answer to this one.

Some of my friends think eating only white food is weird. But Lissa doesn’t think so. That’s because she eats the exact same thing for lunch every single day. Peanut butter and jelly. She never eats anything else for lunch—ever.

“I guess so,” I gave in. Macaroni and cheese is my favorite food. No way could I pass it up. Even if it meant going to Kevin’s house for a surprise.

I ran downstairs and grabbed my jacket from the hall closet. Then I went into the kitchen to tell Mom where I was going.

Mom makes lots of dolls. And she’s really good at it. She makes them in all sizes—little ones, big ones, some as tall as I am. She sells them all over the country. People really love her dolls.

“Sure.” Mom glanced up and smiled.

“Dinner?” Dad walked into the room carrying a screwdriver. “Is it time for dinner already?”

He leaned over and tightened the doll’s elbow—not Mom’s. Dad is really handy. He can fix anything.

“See you!” I called as I walked out the back door.

I thought about the macaroni and cheese—and ran the four blocks to Kevin’s house. When I arrived, Kevin and Lissa were practicing karate on the front lawn.

They moved around each other, making circles in the air with their hands. Then in one swift motion Lissa lunged for Kevin and flipped him onto his back.

Lissa is eleven, a year younger than Kevin and me. But she’s a lot stronger than either of us. She has long brown hair, big brown eyes, and freckles that dot her nose. She hates her freckles as much as I hate my rosy cheeks.

“Hey! Where did you learn that move?” Kevin muttered, sitting up and rubbing his back.

“Thanks a lot, Lissa.” Kevin grumbled. “Now you ruined the surprise.”

“It’s not my fault.” Lissa blew her long bangs out of her eyes. “You’re the one who asked about my new move.”

“Hey, guys. Who is Aunt Sylvie?” I asked again.

“She’s our great-aunt,” Kevin explained. “She’s staying with us for a few months. She was the surprise.”

“Your great-aunt is the surprise?” I asked in disbelief. “What kind of surprise is that?”

“You’ve never met anyone like her!” Kevin added. “The last time we saw her, we were babies. So we didn’t know how great Great-Aunt Sylvie was—till now!”

“Come on.” Kevin jumped to his feet. “You have to meet her!” He led the way into the house.

“What’s that smell?” I asked, sniffing the air as we walked toward the kitchen.

“Aunt Sylvie must be cooking up something special,” Kevin answered.

Special might be one way to describe the smell of Aunt Sylvie’s cooking. Putrid would be another.

“There she is,” Lissa whispered as we stood in the doorway to the kitchen.

When I saw Aunt Sylvie standing at the stove, I could tell right away that she was different from any other aunt I had met before.

I mean, she looked like a grandmother—kind of old with white hair and wrinkled skin. But she was wearing bright pink leggings, a neon-orange sweatshirt, and black hightops. And she wore a blue baseball cap with the visor turned to the back, just the way I wear mine.

She stood in front of a huge pot, stirring whatever was inside it with a long wooden spoon.

Rows and rows of herbs, spices, and knobby hard things that looked like plant roots sat on the counter next to the stove. She reached for one of the roots and started to drop it into the pot. Then she stopped.

“No orrisroot?” she asked. “Oh! Of course not! You’re absolutely right! Orrisroot is for making perfume—not dinner!” Aunt Sylvie hit her forehead with the heel of her hand. “How forgetful I am!”

I craned my neck and glanced around the room. Except for Aunt Sylvie, no one was there.

“Who is she talking to?” I whispered.

“Aunt Sylvie, this is our friend Sam,” Lissa introduced me. “He’s going to eat dinner with us tonight.”

I backed away from the kitchen doorway. No way was I going to eat what was in that pot. NO WAY!

Kevin grabbed my arm and pulled me forward. “Come on. You have to talk to Aunt Sylvie. She is awesome.”

“Wouldn’t she rather talk to my great-grandfather?” I whispered, trying to tug free. “He’s dead. I’ll introduce her to him. But I have to go home first—to find out his name.”

“Sam, don’t be shy.” Aunt Sylvie walked over to me. Then she slowly reached up to my face with her wrinkled fingers—and pinched my cheeks. “You are soooo cute!”

Aunt Sylvie chuckled too as she guided me to the stove. She picked up the wooden spoon and started stirring the pot again.

“How about a little taste?” she asked, smiling.

“NO! I mean, no, thank you,” I said, backing away—before I gagged from the smell.

She lifted the spoon out of the pot.

A slimy creature with arms and legs stared up at me. I watched in horror as it tried to wriggle off the spoon.

She shoved the spoon against my lips.

I clenched my lips shut. I shook my head no, furiously.

Aunt Sylvie tightened her grasp on my wrist.

She stared hard into my eyes. 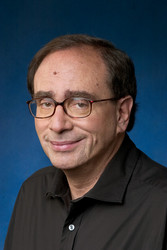 R.L. Stine invented the teen horror genre with Fear Street, the bestselling teen horror series of all time. He also changed the face of children’s publishing with the mega-successful Goosebumps series, which went on to become a worldwide multimedia phenomenon. Guinness World Records cites Stine as the most prolific author of children’s horror fiction novels. He lives in New York City with his wife, Jane, and their dog, Nadine.

The Boy Who Ate Fear Street

More books in this series: Ghosts of Fear Street