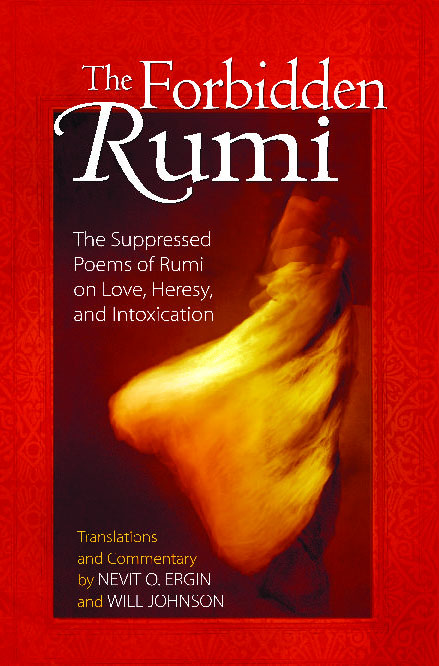 The Suppressed Poems of Rumi on Love, Heresy, and Intoxication

Translated with commentary by Nevit O. Ergin and Will Johnson
LIST PRICE ₹399.00
PRICE MAY VARY BY RETAILER

After his overwhelming and life-altering encounters with Shams of Tabriz, Rumi, the great thirteenth-century mystic, poet, and originator of the whirling dervishes, let go of many of the precepts of formal religion, insisting that only a complete personal dissolving into the larger energies of God could provide the satisfaction that the heart so desperately seeks. He began to speak spontaneously in the language of poetry, and his followers compiled his 44,000 verses into 23 volumes, collectively called the Divan.

When Nevit Ergin decided to translate the Divan of Rumi into English, he enlisted the help of the Turkish government, which was happy to participate. The first 22 volumes were published without difficulty, but the government withdrew its support and refused to participate in the publication of the final volume due to its openly heretical nature. Now, in The Forbidden Rumi, Will Johnson and Nevit Ergin present for the first time in English Rumi’s poems from this forbidden volume. The collection is grouped into three sections: songs to Shams and God, songs of heresy, and songs of advice and admonition. In them Rumi explains that in order to transform our consciousness, we must let go of ingrained habits and embrace new ones. In short, we must become heretics.

Songs to Shams, Songs to God 6

What a story! You finally meet someone in whose presence you are transported to God. You immediately go off together, hand in hand, and shut yourself off from the world behind the closed doors of your retreat room. Over the weeks and months to follow, you dissolve into each other through simply sitting in each other’s presence, gazing raptly at each other. (When God sits down before you, where else would you want to look?) When you emerge from your retreat, you are fundamentally different from the person who entered it so many months before. The only sane thing to do after an event like this is to live happily ever after, yes? But it wasn’t like that.

Rumi may have entered into retreat with Shams as a kind of devout shepherd, looking after his flock of followers, but he emerged as a hungry wolf, exhorting people to drop their pretenses, move beyond their rigid adherence to the outward forms of religion, and enter instead into a direct experience of God.

Rumi wanted the townspeople of Konya to recognize Shams as he had come to know and see him: as a direct conduit to the divine. For Rumi, Shams was a funnel that led to God. Exposed to the heat of Shams’ presence, Rumi would simply melt, and the mixture of the two souls would take both into the consciousness of union. This is what true religion is all about, and Rumi fully expected his former followers to leap into the divine fire with him.

Their response instead was to react mostly with criticism and outrage to the perceived heresy of two souls merging into the one God. For the orthodox mind, it is accepted that the founder of the religion would have had a direct encounter with the energies of God, but not, evidently, anyone else. The negativity around the companionship between Rumi and Shams grew so large that Shams had no choice but to leave, and Rumi fell apart with grief.

Songs to Shams, Songs to God 7

He began to write letters to Shams, begging him to return, and dispatched them to different parts of the Islamic world in the hopes that one of them might eventually be received. More than a year passed before he heard anything back. Yes, Shams would return.

The two great friends immediately plunged back into retreat, and a new round of dissolving and merging of souls began. The reactions of the townspeople continued much the same as before. This time, when Shams left, he was set upon like a hated predator and murdered.

The complete Divan-i-Kebir is considered to contain all the spontaneous utterances that Rumi ever made concerning his interaction with Shams. Some of the poems read like open letters to Shams. Some read like a historical recounting of their time together. Some of them praise Shams as God’s representative on Earth, while others rail in anguish at the cruelty of his teasing and the petulance of his departures.

Is Rumi addressing Shams alone in these poems? Or is he directly addressing God? The lines become blurred.

Songs to Shams, Songs to God 8

Songs to Shams, Songs to God 9

He said to me, “You’re a candle,
the light to these people.”
I gave them all up.
I became smoke and spread myself around.
He said to me, “You’re the sheikh, the head,
the one who walks at the front, the guide.”
I told him that I’m neither sheikh nor guide.
I am the follower of your order.
He said to me, “You have arms and wings.
I don’t give anything to you.”
I told him that I desire his wings so that
I can cut mine.
His glory then spoke to me and said,
“Don’t give up now. You’re almost there.
I’ll soon grant you the favor you seek and come to you.”
And so he said to me, “O old love of mine,
Don’t ever get out from under my arm.”
And I said, “Yes,”and I stayed there.

Songs to Shams, Songs to God 10

I Came Back to You

Come, O sweet-lipped beauty,
Drink this haram wine*
if you have the nerve.
If you have a heart like the sea,
pick up the wine that reveals
what being human is really about.
I came back to you
because I couldn’t find the kind and decent things
I found in you anywhere else.

“For the past fifty years Nevit Ergin has been working to bring into English the entirety of Rumi’s vast Divani Shamsi Tabriz. This last volume is the most incendiary and it clearly dissolves the boundaries of organized religion and national ego that keep us from the table of friendship that Rumi invites us to. . . . We are very grateful to Dr. Ergin for his life’s work.”

"It takes a great deal of courage to read The Forbidden Rumi as it may press a lot of buttons, not only about your own pathway to God, but your views and prejudices about love, religion, heresy and Islam.

"All of Rumi’s poems have enjoined us to release the rules and open our hearts to our inner treasure of love, but these most controversial poems cut to the bone.

"This final book of Rumi’s poems is a must-read for any serious student of spiritual ecstasy. They pose questions that make us wonder and re-evaluate our views about a religion that is portrayed as governed by extremists. They reveal a hidden face of Islam that may surprise even moderate Islamists.

"Most importantly, these poems reveal that Islam too has always had a mystical, transcendent element that is its purest gift."

The Suppressed Poems of Rumi on Love, Heresy, and Intoxication

Translated with commentary by Nevit O. Ergin and Will Johnson
LIST PRICE ₹399.00
PRICE MAY VARY BY RETAILER