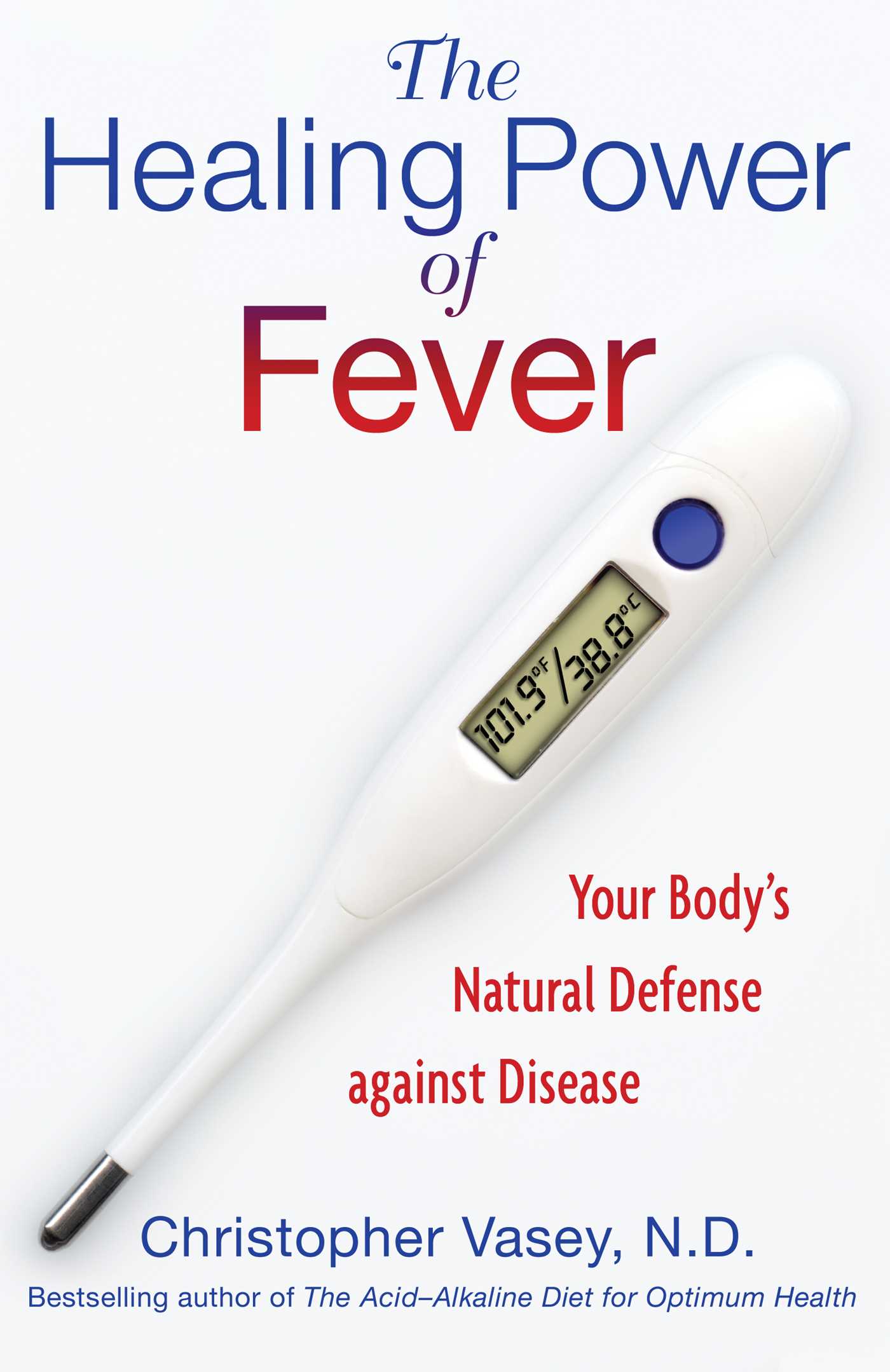 The Healing Power of Fever

Your Body’s Natural Defense against Disease

A guide to the healing and detoxifying effects of fever

• Explains how to best support the body during the 3 different stages of fever through the use of hydrotherapy, medicinal herbs, and diet

• Shows how to create an artificial fever to detoxify the body

Contrary to popular belief, a fever is not a symptom to be treated but a sign of a healthy, functioning immune system naturally working to heal the body. The rise in body temperature is caused by the intensification of efforts by the body’s defenses as they fight microbes and purify the internal terrain. Lowering a fever through the use of drugs counters the body’s ability to fight illness, infection, or poisoning and can greatly lengthen recovery time.

In The Healing Power of Fever, naturopath Christopher Vasey explains the natural process of a fever, how to properly measure it, and how to best support the body during the 3 different stages of fever through the use of hydrotherapy, medicinal herbs, and diet. Providing guidelines on the dangers of fever, he details how to know when a fever is too high or has gone on too long and what to do to bring it down and aid the body’s recovery. He also explains how to create an artificial fever as a means of detoxification and rejuvenation. Helping us understand what a fever really is and how it can benefit the body, Vasey asks us to stop considering fever as an enemy to be conquered and start seeing it as the healing ally that it truly is.

While fever is a powerful healing agent provided by nature, sometimes it acts too strongly for the body to support; on other occasions it labors to fully manifest. It is therefore very important to understand the methods available for moderating it when necessary as well as those, in the opposing cases, that are capable of stimulating its efforts.

Properly speaking, hygiene is not a therapy, but by contributing to the patient’s well-being, it has a healing effect all the same. Measures as simple as good physical hygiene (rest, airing out the room, and so on) and good mental hygiene (stress reduction, elimination of noises, establishing inner calm) spare the strength of the patient and thereby supports the task on which the body is working: healing. Rather than fighting against problems that can cause fatigue, such as dealing with the cold, the body can devote all its energy to fighting against the illness.

So what are some of these hygiene measures we can utilize?

Rest
During a fever, great demands are being made on the patient’s forces. A great deal of energy is expended to permit the healthy escalation of metabolic activity as well as that of the immune system’s defenses. Rather than pursuing his usual activities, the patient should rest. By doing this, his energies will all be concentrated on a single goal.

Rest--rest in bed--is therefore compulsory. There should be plenty of covers so that he can add more if he feels a chill, something that is quite common during the onset of illness.

The room temperature should also be pleasant. It should not be too cold, which will force the body to expend energy needlessly trying to stay warm, but nor should it be too hot, which will have the result of exhausting the patient to no good purpose.

Recommendations for getting plenty of rest are not restricted to the body, the mind, too, needs to take it easy. The room should be peaceful, sheltered as much as possible
from the hubbub of daily life and noise. Distractions such as radio and television or electronic games are strongly ill-advised; they will subtract from the patient’s strength without offering anything positive in return with respect to healing.

Inner tranquillity, or at least a little peace of mind, will promote and encourage the unrestricted performance of the body’s organic processes. The people around the patient can help contribute to this state by remaining calm and confident themselves.

Drinks
A patient burning with fever can easily do without food, but she must drink. The preeminent beverage for those suffering from fever is water.

Patients will experience a need to quench their thirst and replace the fluids they are losing through perspiration and urination. The presence of enough fluid in the tissues is essential for cellular exchanges to take place properly and for the metabolism to function correctly. A dehydrated body functions in slow motion and is ill equipped to defend itself.

Regular intake of water will also make it possible to reduce the concentration of toxins and poisons in the bloodstream and in the cellular fluids. Their ability to attack and hurt the tissues will thereby be greatly lessened. Abundant intake of liquids also makes it possible for the body to transport the wastes to the emunctory organs so they can be evacuated from the organism. If the quantities of sweat and urine are reduced because of a lack of liquid, the number of wastes the body eliminates will also be reduced.

In order for the body to mount the best defense against an illness, a continuous transit of liquid passing through it will be necessary. This will have both a vitalizing and cleansing
effect. The beverages used for this purpose should be non-nutritious, because the body’s digestive abilities are weakened during a fever. But they should not provide an additional intake of toxins either as is the case with coffee, black tea, commercial sodas, and so forth. This would be counterproductive, as through the fever the body is seeking to neutralize and eliminate the excess of toxins from which it is suffering.

The following drinks are recommended during the course of a fever.

- Water. Either tap water or bottled spring water. It should be drunk cold or at room temperature, depending upon the patient’s preference. The patient should trust his instinct and drink as much as he wants. If the individual is drinking too little, he should be encouraged by being regularly offered a glass of water over the course of the day.

- Herbal Teas. Although they contain a variety of substances from the medicinal plants that are used to brew them, herbal teas are normally lacking any nutrients as long as they are not sweetened with sugar. They have a pleasant aroma and taste that, depending on the case, can have a soothing or stimulating effect upon the patient. The most highly recommended teas to drink during a fever are those containing linden, mint, verbena, and chamomile.

Cleanliness
The patient will release large amounts of sweat during this time. This can add up to several quarts a day, instead of the normal 2 cups worth. This perspiration is also more charged with wastes and poisons than ordinarily because of the body’s efforts to detoxify itself. These wastes will quickly soak into the pajamas and bed sheets, especially during the periods of the fever characterized by fierce perspiration.

To avoid the patient being constantly “bathed” in the wastes that have been expelled through the skin, and more importantly to avoid their reabsorption into the body by prolonged contact, it is essential that patients get rid of them by regularly washing themselves and changing what they have been wearing. The sheets on the patient’s bed should be replaced by clean ones as often as necessary. This will ensure that the patient is more at ease and also avoid any chance of being infected again with the wastes that were most recently expelled.

Christopher Vasey, N.D., is a naturopath specializing in detoxification and rejuvenation. He is the author of The Acid-Alkaline Diet for Optimum Health, The Naturopathic Way, The Water Prescription, The Whey Prescription, and The Detox Mono Diet. He lives near Montreux, Switzerland.

“The thing that really stood out to me about Vasey’s book is that he worded it in ways that anyone can understand it. You don’t need a medical degree to comprehend the concepts put forth in The Healing Power of Fever. Nor do you need one to implement his methods. With simple tips such as ensuring to change the sheets when someone is bedridden and has a fever, drinking plenty of water and complementing treatments with things like herbal teas such as a white willow decoction his suggestions are easy to follow with ideas anyone can use in any lifestyle on any budget. Highly recommended, for anyone and everyone.”

“To quickly summarize, The Healing Power of Fever should be in the hands of all hypochondriacs (such as myself) and every parent. In the right hands, this tiny book could eliminate a lot of stress and grief.”

“Dr. Vasey helps us understand the body’s temperature, its natural variations, its natural course and its dangers. He highlights ways to control fever through diet, hygiene, hydrotherapy, intestinal draining, complementary care and medicinal herbs. He advises on when to fast and what to eat during a fever, and how to manage liquid, fluid and solid food stages. His book is a boon for health professionals and laypeople.”

The Healing Power of Fever

Your Body’s Natural Defense against Disease

SEE ALL
See more by Christopher Vasey
Thank you for signing up, fellow book lover!