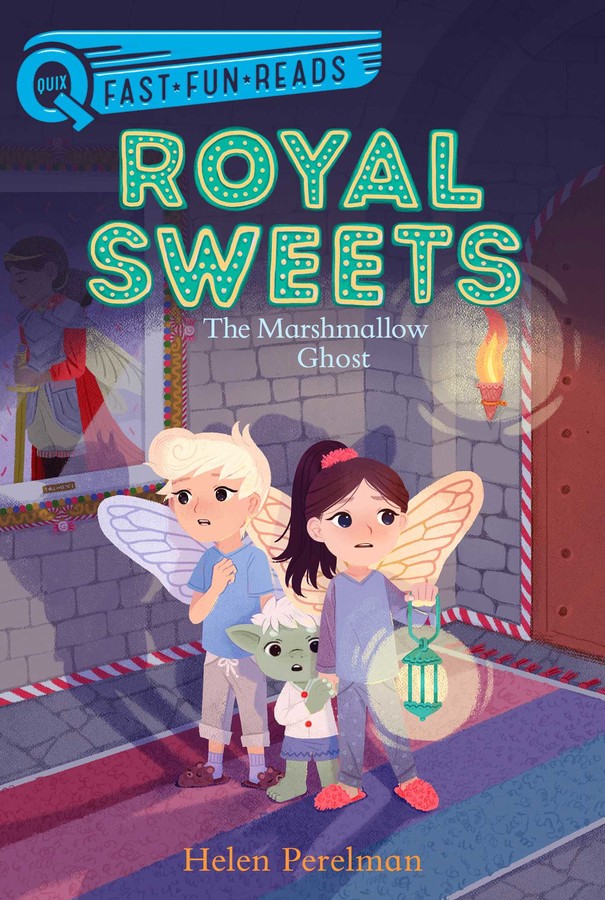 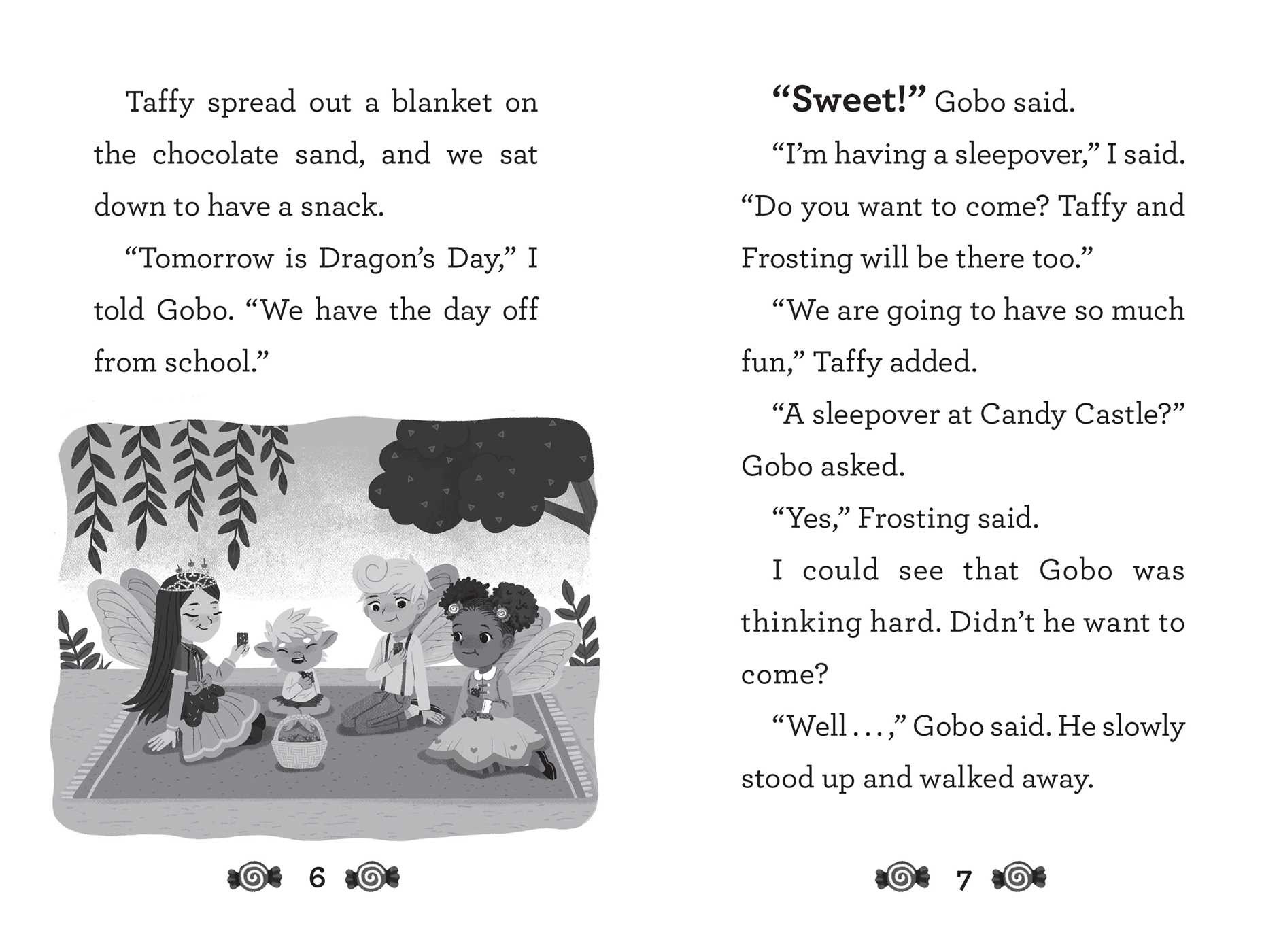 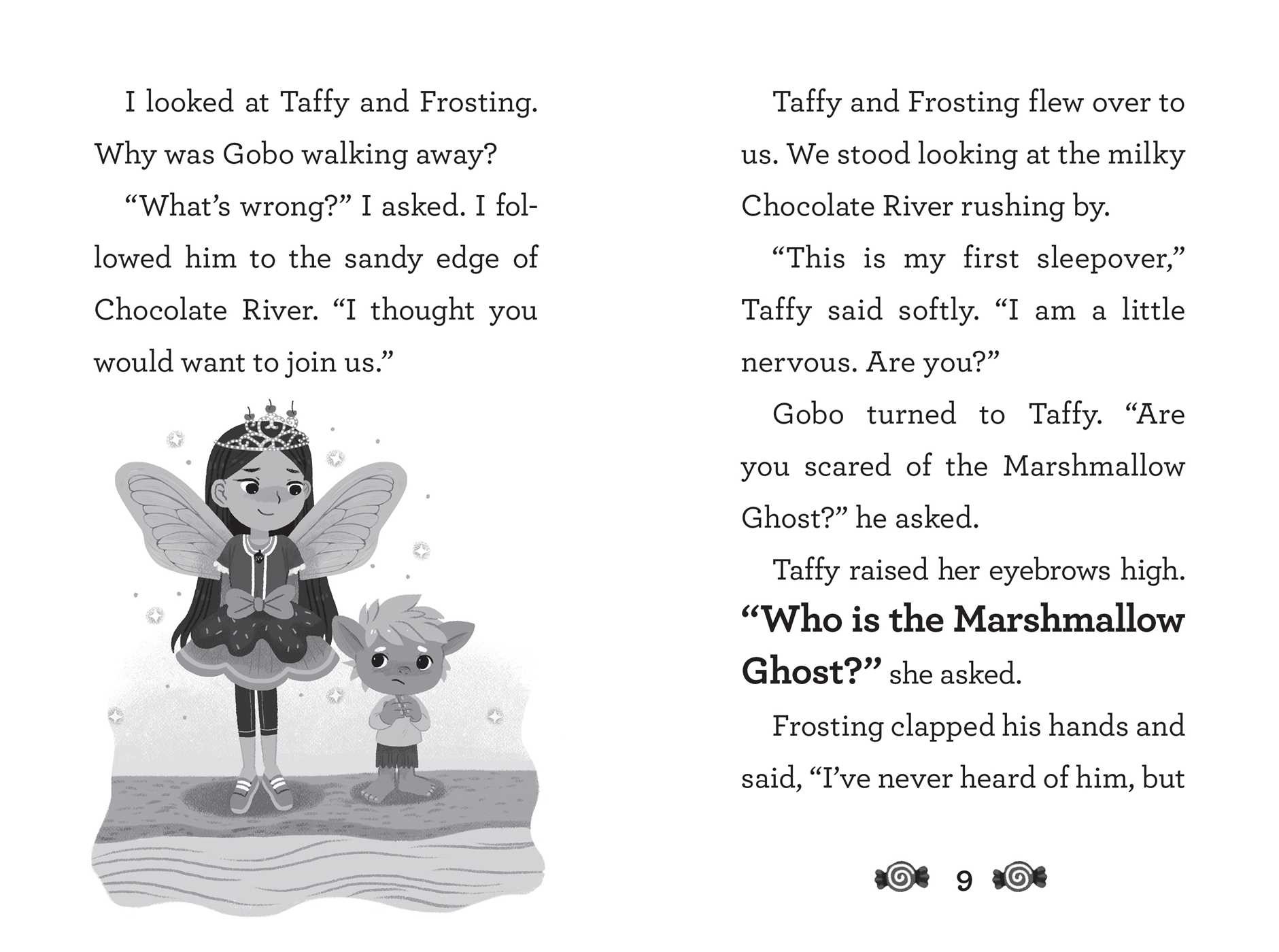 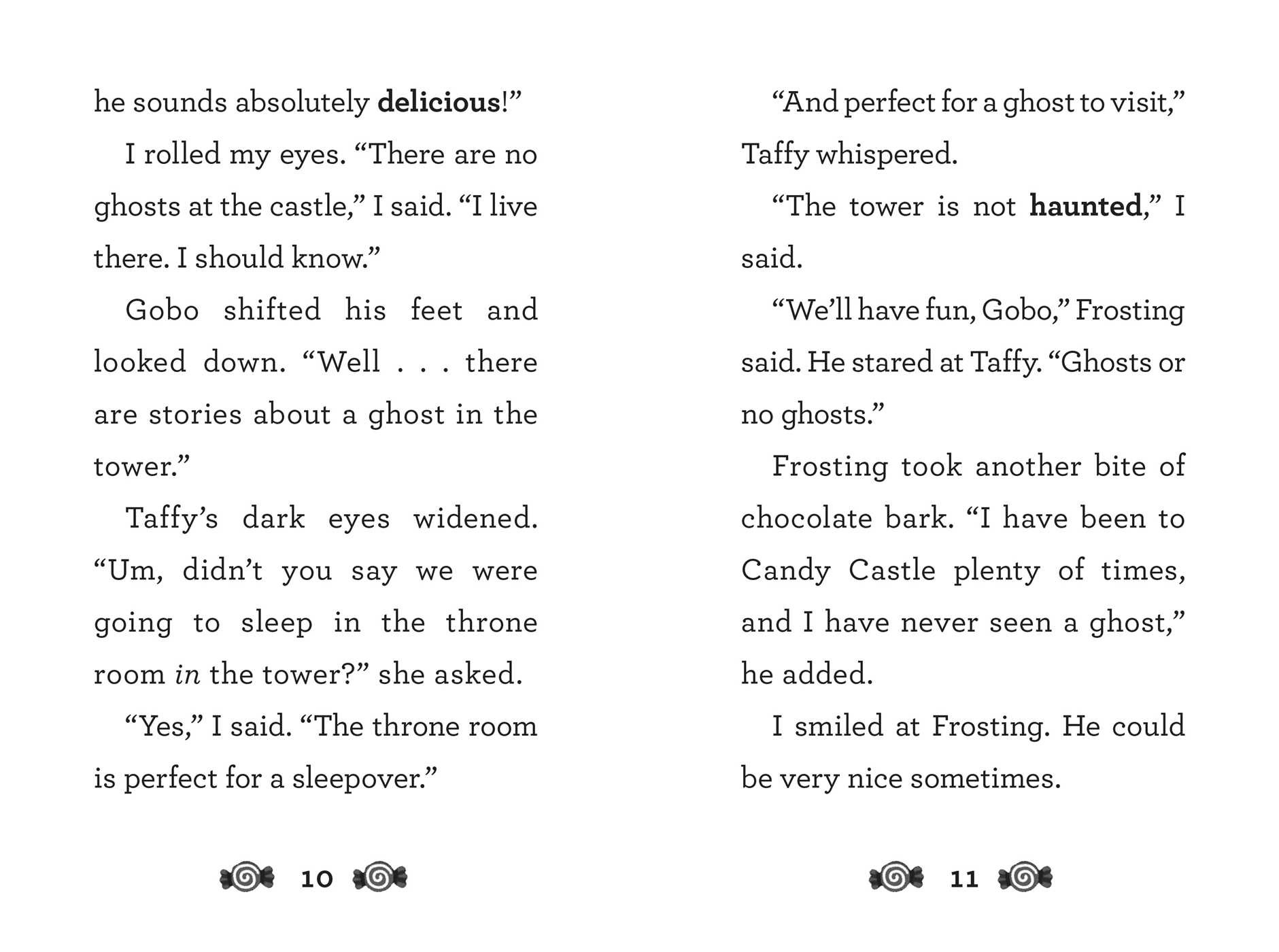 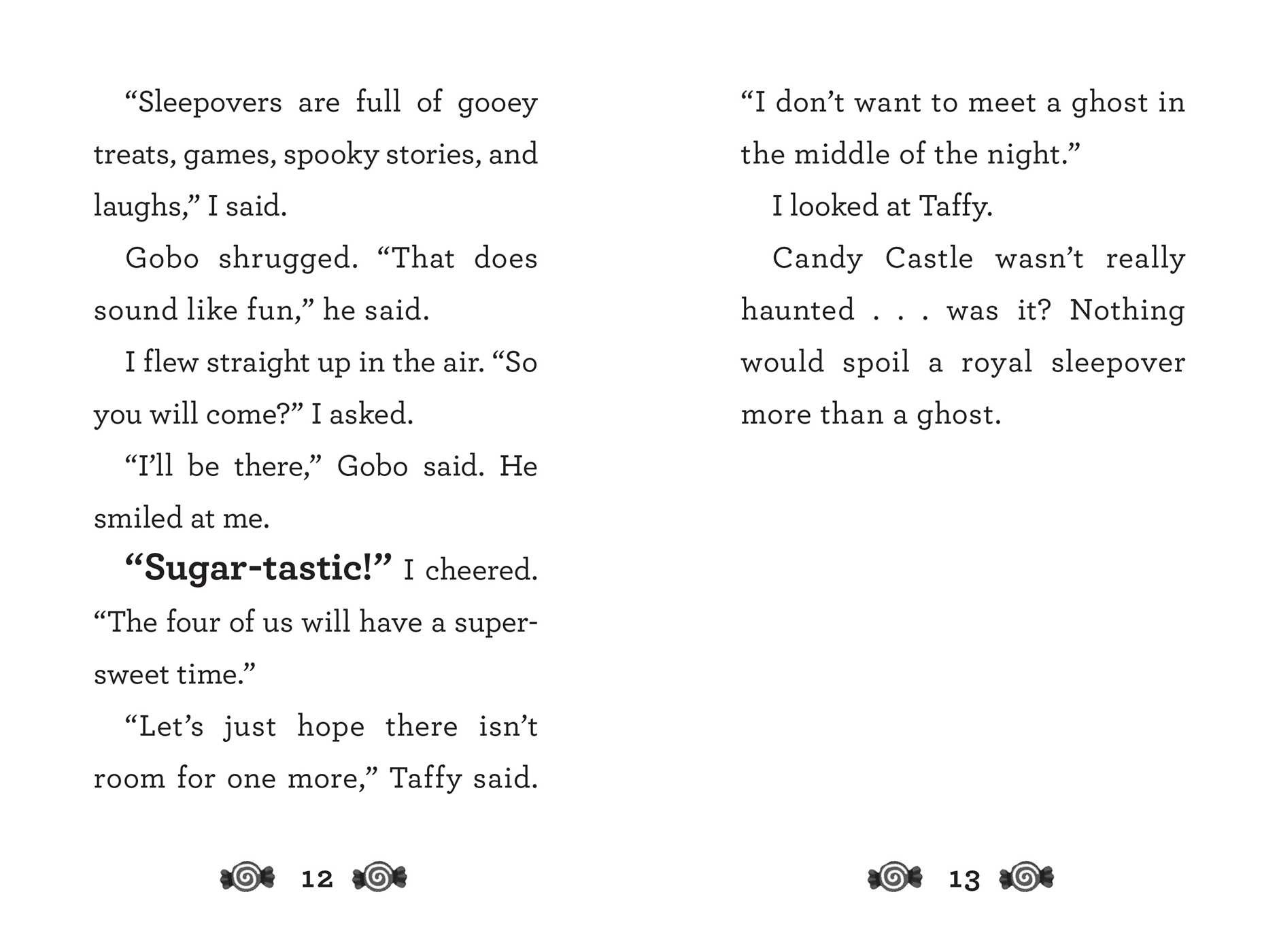 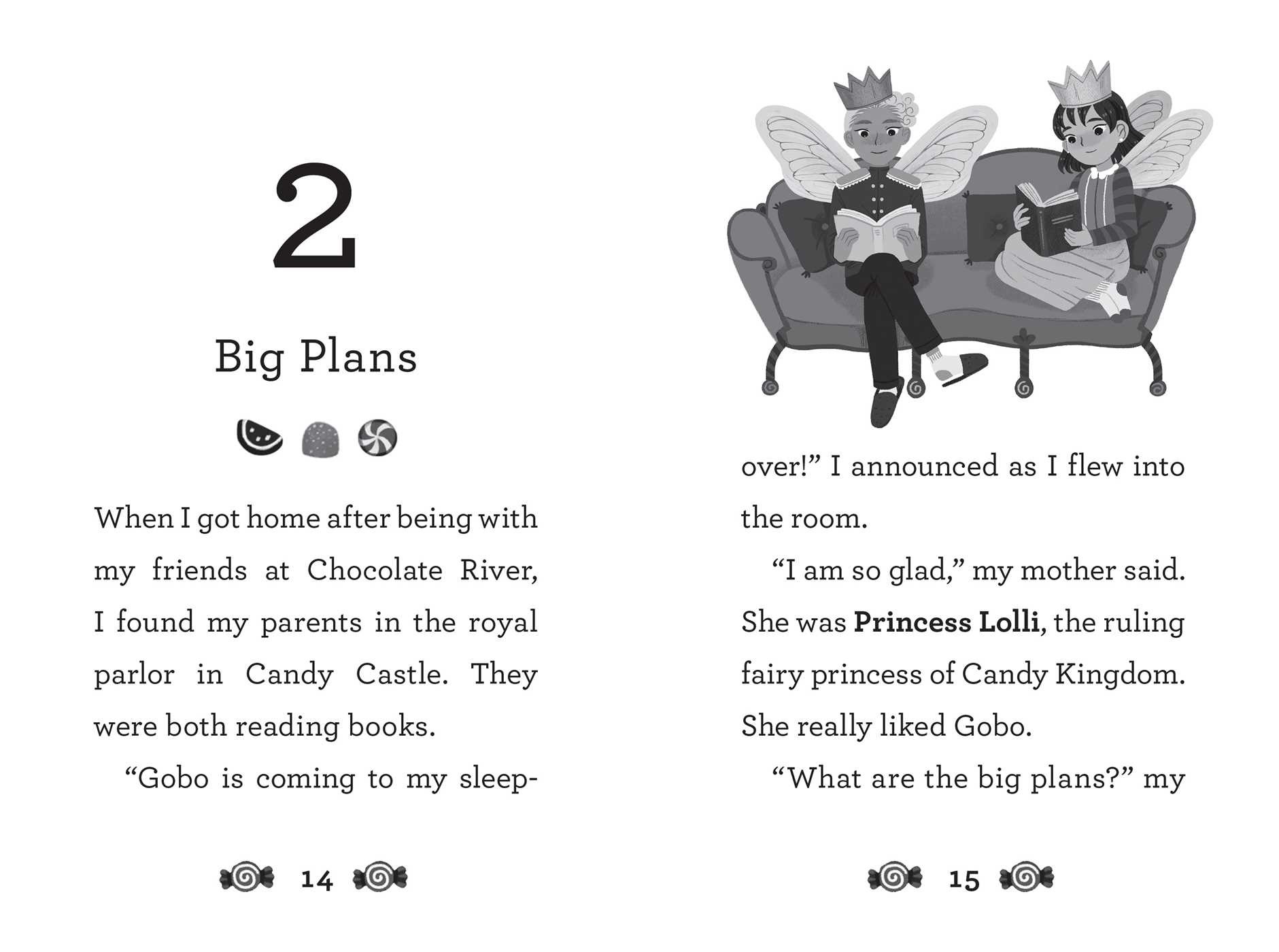 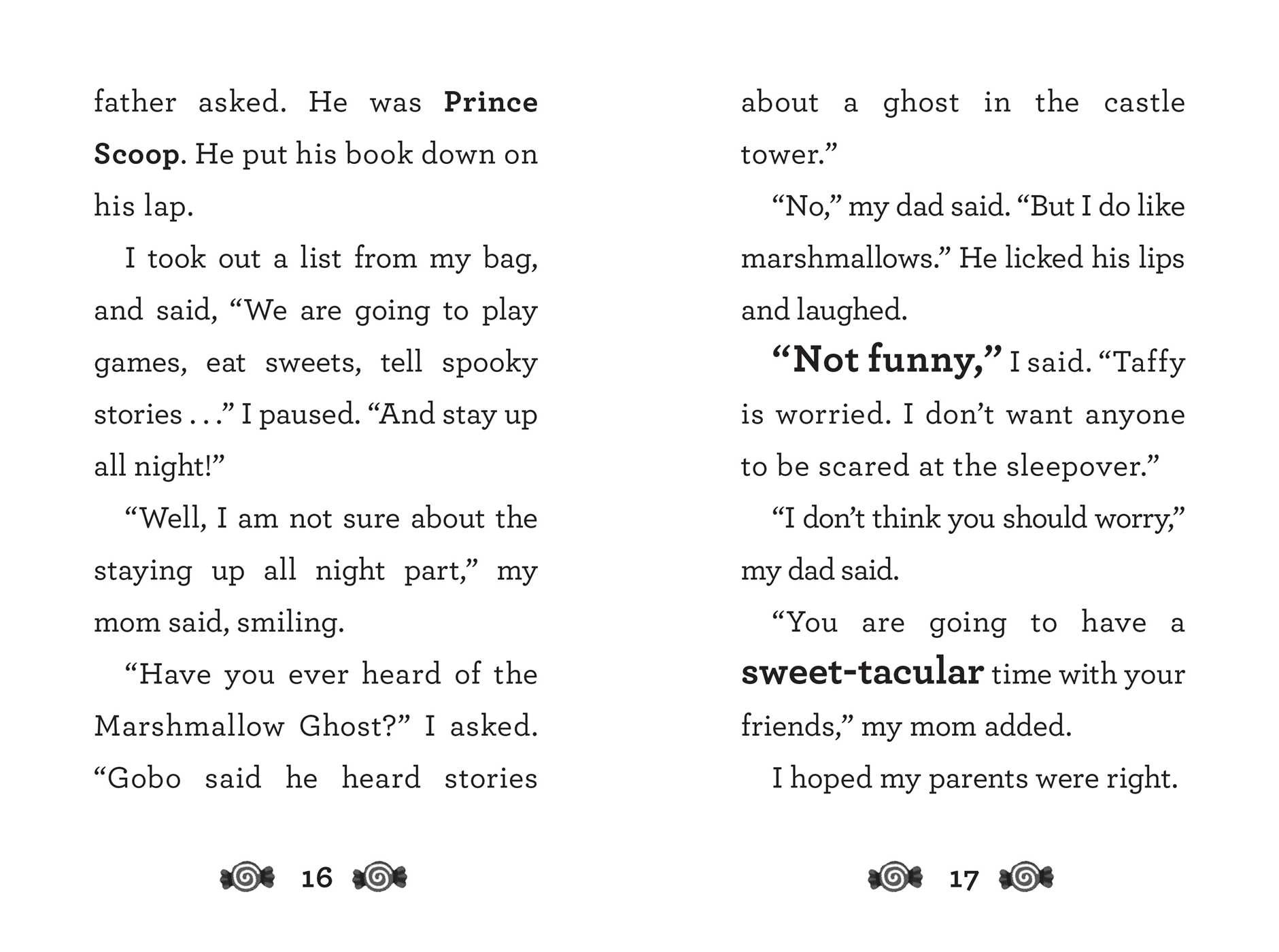 Read all about Princess Mini and her merry mis-adventures at Royal Fairy Academy in the newest Royal Sweets book that’s perfect for fans of Sofia the First.

A sleepover at the Royal Castle has Mini, Taffy, Frosting, and even Gobo the little troll believing in marshmallow ghosts in this fourth super-sweet Aladdin QUIX story.

I, Princess Mini, was one very happy princess. School was over for the day, and the next day was Dragon’s Day. Dragon’s Day was a holiday in Candy Kingdom to honor the dragons that lived in Sugar Valley. There was no school or work for Candy Fairies. I had big plans.

I was planning my first royal sleepover.

My best friend, Princess Taffy, was coming. She had been to Candy Castle many times. This would be our first sleepover. We’d already started to make a schedule of things to do. We were going to have the best time.

My parents told me I had to invite Cupcake, too. She was not as sweet as her name sounds. Fortunately, she had other plans for the night.

Gobo, my newest friend, was a troll who lived in Chocolate Woods.

For a while, he was my secret friend. Candy Fairies and trolls aren’t always friends in Sugar Valley. Now things were different.

I was on my way to Chocolate Woods with Taffy and Frosting. Our plan was to ask Gobo to join us at the sleepover.

When we landed in the woods, Gobo was there to greet us.

Taffy spread out a blanket on the chocolate sand, and we sat down to have a snack.

“Tomorrow is Dragon’s Day,” I told Gobo. “We have the day off from school.”

“I’m having a sleepover,” I said. “Do you want to come? Taffy and Frosting will be there too.”

“We are going to have so much fun,” Taffy added.

I could see that Gobo was thinking hard. Didn’t he want to come?

I looked at Taffy and Frosting. Why was Gobo walking away?

“What’s wrong?” I asked. I followed him to the sandy edge of Chocolate River. “I thought you would want to join us.”

Taffy and Frosting flew over to us. We stood looking at the milky Chocolate River rushing by.

“This is my first sleepover,” Taffy said softly. “I am a little nervous. Are you?”

Gobo turned to Taffy. “Are you scared of the Marshmallow Ghost?” he asked.

Taffy raised her eyebrows high. “Who is the Marshmallow Ghost?” she asked.

Frosting clapped his hands and said, “I’ve never heard of him, but he sounds absolutely delicious!”

I rolled my eyes. “There are no ghosts at the castle,” I said. “I live there. I should know.”

Gobo shifted his feet and looked down. “Well . . . there are stories about a ghost in the tower.”

Taffy’s dark eyes widened. “Um, didn’t you say we were going to sleep in the throne room in the tower?” she asked.

“Yes,” I said. “The throne room is perfect for a sleepover.”

“And perfect for a ghost to visit,” Taffy whispered.

“The tower is not haunted,” I said.

“We’ll have fun, Gobo,” Frosting said. He stared at Taffy. “Ghosts or no ghosts.”

Frosting took another bite of chocolate bark. “I have been to Candy Castle plenty of times, and I have never seen a ghost,” he added.

I smiled at Frosting. He could be very nice sometimes.

“Sleepovers are full of gooey treats, games, spooky stories, and laughs,” I said.

Gobo shrugged. “That does sound like fun,” he said.

I flew straight up in the air. “So you will come?” I asked.

“Sugar-tastic!” I cheered. “The four of us will have a super-sweet time.”

“Let’s just hope there isn’t room for one more,” Taffy said. “I don’t want to meet a ghost in the middle of the night.”

I looked at Taffy.

Candy Castle wasn’t really haunted . . . was it? Nothing would spoil a royal sleepover more than a ghost.
Helen Perelman

Olivia Chin Mueller grew up in Chester, Connecticut, and now lives in Los Angeles, California. She attended the Rhode Island School of Design and graduated with a BFA in 2014. Besides illustrating, Olivia loves playing with her cats, raising silk moths, and also enjoys sewing and felting plush animals of her own.

More books in this series: QUIX