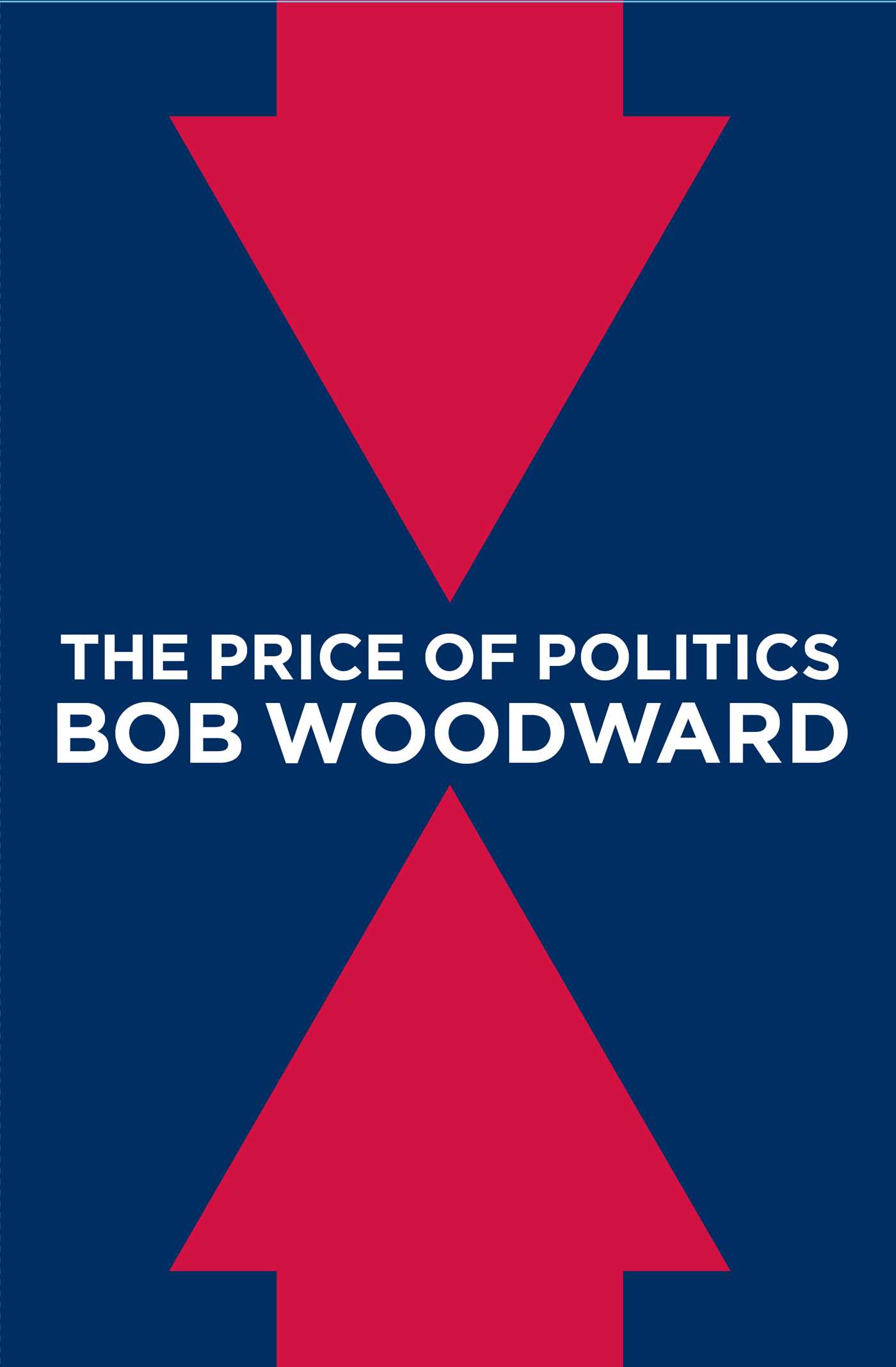 The Price of Politics

See how and why Washington is not functioning in Bob Woodward’s freshly reported, thirty-five-page Afterword to his national bestseller, The Price of Politics, which provides a detailed, often verbatim account of what happened in the dramatic “fiscal cliff” face-off at the end of 2012 between President Obama and the Republicans.

Now it’s happening again. In fall 2013, Washington faces a new round of budget and fiscal wars that could derail the American and global economies.

It was the land of no-compromise: On health care cuts over ten years, Boehner suggested to Obama, you are $400 billion, I’m at $600 billion. “Can we split the difference here? Can we land at $500 billion?” “Four hundred billion is it,” Obama replied. “I just can’t see how we go any further on that.”

After making $120 billion in other concessions, Obama pleaded with Boehner, “What is it about the politics?” “My guys just aren’t there,” Boehner replied. “We are $150 billion off, man. I don’t get it. There’s something I don’t get.”

The Price of Politics chronicles the inside story of how President Obama and the US Congress tried, and failed, to restore the American economy and set it on a course to fiscal stability. Woodward pierces the secretive world of Washington policymaking once again, with a close-up story crafted from meeting notes, documents, working papers, and interviews with key players, including President Obama and House Speaker John Boehner. Woodward lays bare the broken relationship between President Obama and the Congress.

The lavish dinner at the Capital Hilton Hotel in downtown Washington on the evening of Saturday, March 11, 2006, was about the last place you would expect to find him. But there was Barack Obama, age 44, the junior senator from Illinois for only the last 14 months, in formal white-tie with tails and very much at ease in the crowd of 600. His trademark smile, broad and infectious, dominated his face as I met him for the first time.

We were at the annual Gridiron Club dinner—a rite of passage for national political figures such as Obama. The crowd included President George W. Bush and most of the major politicians in Washington. It was one of Senator Obama’s maiden voyages into the unsavory belly of the Washington beast. Bush was to speak for the Republicans, and Obama had been selected to speak for the Democrats.

Founded in 1885, the Gridiron—named because its motto was to “singe but not burn”—had the reputation of being an old-school event of in-jokes, skits and music that seemed more fitted to a bygone era.

“You’re from Wheaton, Illinois,” Obama said to me, referring, unprompted, to the small town where I was raised in the late 1940s and ’50s. Wheaton, 25 miles west of Chicago, is home to Wheaton College, best known for its alumnus evangelist Billy Graham, whose influence permeated the town.

“I’ll bet you didn’t carry Wheaton,” I said confidently, referring to his Senate race 16 months earlier. A bastion of Midwestern conservatism and country-club Republicans, Wheaton was the most Republican town in the country in the 1950s, or at least regarded itself that way.

“I carried DuPage County by 60 percent!” Obama responded, beaming that incandescent smile. Wheaton is the county seat of DuPage.

I said that seemed utterly impossible. That couldn’t be the Wheaton or DuPage I had known.

Obama continued to smile me down. The certainty on his face was deep, giving me pause. Suddenly, I remembered that Obama’s opponent for the Senate seat had been Alan Keyes, the conservative black Republican gadfly. Keyes had substituted at the last minute for the first Republican nominee, who withdrew from the race when divorce and child custody records revealed that he had taken his wife to sex clubs in New York, New Orleans and Paris.

“Well, everyone who runs for office should have Alan Keyes as their opponent,” I said, trying to hold my ground.

Obama smiled some more—almost mirthful, yet unrevealing. The conversation turned to Illinois politics, and Obama ticked off the areas where he had strong support—Chicago, the labor unions—and weak support, downstate and the farm areas. He defined the categories skillfully, expanding on the state’s interest groups and voting blocs. He made it clear he knew where he had work to do.

He sounded like a graceful old-fashioned pol. Though he had carried DuPage by 60 percent, he had won 70 percent of the statewide vote.

His wife, Michelle, stood by his side in a stunning gown. But the focus and the questions from people crowded around were all directed at the dazzling new star.

“This is a true story,” he said.1 “A friend sent me a clip about a new study by a psychologist at the University of Scotland who says sex before a public speaking engagement actually enhances your oratorical power. I showed this clip to Michelle, before we arrived here tonight. She looked it over, handed it back and said, ‘Do the best you can!’ ”

“This appearance is really the capstone of an incredible 18 months,” he said, citing the keynote speech at the Democratic National Convention in 2004, cover of Newsweek, a best-selling autobiography, Dreams from My Father, a Grammy award for reading the audiobook. “Really what else is there to do? Well, I guess . . . I could pass a law or something.”

Referring to Senator John McCain’s positive treatment by the press up to that point, Obama said, “Some of my colleagues call John a prima donna. Me? I call him a role model. Think of it as affirmative action. Why should the white guys be the only ones who are overhyped?”

Noting the speculation that the 2008 presidential campaign could come down to McCain, a maverick Republican, versus Senator Hillary Clinton, he said, “People don’t realize how much John and Hillary have in common. They’re both very smart. Both very hardworking. And they’re both hated by the Republicans!”

Obama turned toward President Bush, who was on the stage nearby. “The president was so excited about Tom Friedman’s book The World Is Flat. As soon as he saw the title, he said, ‘You see, I was right!’ ”

“I want to thank you for all the generous advance coverage you’ve given me in anticipation of a successful career. When I actually do something, we’ll let you know.”

The audience clapped and hooted in delight.

After dinner the buzz was like a chain reaction. Not only could this young Obama tell a joke on himself, with the required self-effacement, but he had remarkable communications skills. An editor at The Washington Post once said that journalists only write two stories: Oh, the horror of it all, and Oh, the wonder of it all. Obama was the wonder of it all that night and he basked in the attention he had captured. Rarely have I seen anyone manage the moment so well. He had frankly and forthrightly trumpeted his lack of accomplishment, and the roomful of egos ate it up. But if he had done nothing much so far, why was he there? Why the buzz? The approbation? What exactly was being measured?

It was the dramatic impact he was having on his audience. The triumph was the effect.

Twenty-five years earlier in 1981, I had attended a Gridiron dinner where the speaker for the Democrats was Senator Daniel Patrick Moynihan, the bookish intellectual who had served in prominent posts in both Republican and Democratic administrations. Moynihan, then 53, made some good jokes, but his theme was serious: what it means to be a Democrat. The soul of the party was to fight for equality and the little guy, he said. The party cared for the underdogs in America, the voiceless, powerless and those who got stepped on. It was a defining speech, and the buzz afterward was that Moynihan was going to be president. He wasn’t, of course. That was then, this was now.

Obama had not once mentioned the party or high purpose. His speech, instead, was about Obama, his inexperience, and, in the full paradox of the moment, what he had not done.

Two and a half years later, he was president-elect of the United States.

Bob Woodward is an associate editor at The Washington Post where he has worked for 49 years and reported on every American president from Nixon to Trump. He has shared in two Pulitzer Prizes, first for the Post’s coverage of the Watergate scandal with Carl Bernstein, and second 20 years later as the lead Post reporter for coverage of the 9/11 terrorist attacks.

The Price of Politics

SEE ALL
See more by Bob Woodward
Thank you for signing up, fellow book lover!