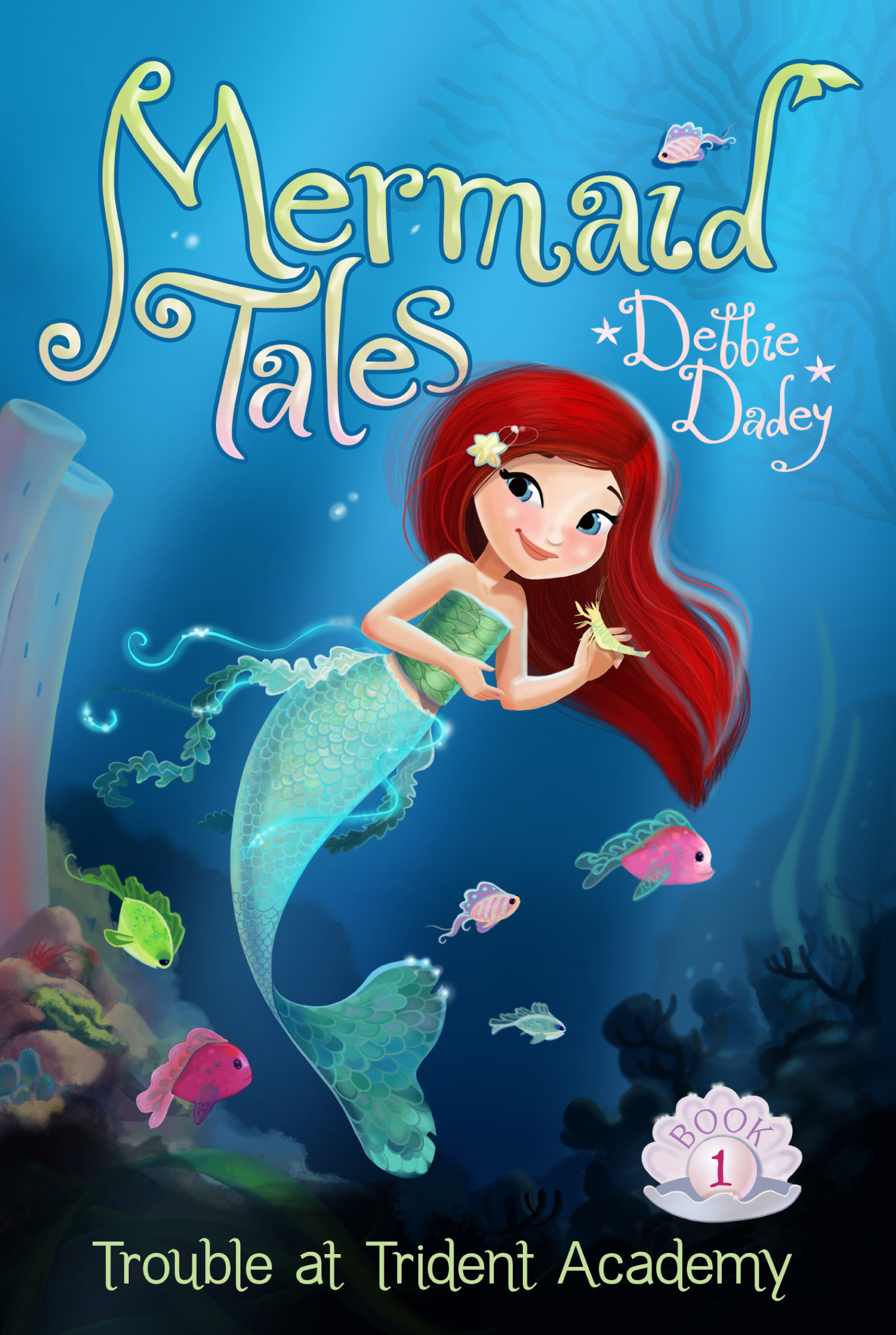 In this start to a new series starring Shelly the mermaid, a classroom conflict is no fun—even when school is 20,000 leagues under the sea.

It’s MerGirl Shelly Siren’s first day at a new school, and she is nervous from the tip of her head to the end of her sparkling mermaid tail. How will she ever fit in at the prestigious Trident Academy? Everyone there is so smart and so pretty and so rich. At least she and her best friend, Echo, are in the same class, but so is Pearl, a spoiled know-it-all who only wants to make trouble for Shelly; Rocky, a MerBoy who loves to tease everyone; and Kiki, a shy MerGirl who’s new to Trident City.
At first Shelly and Echo have lots of fun: eating lunch together, trying to make grumpy Mr. Fangtooth smile, and joining after-school clubs. But when Shelly and Echo have an argument about their very first school assignment, Pearl gets involved and makes matters worse. Will Shelly and Echo fix their friendship?

Shelly took a small sip of her seaweed juice before pushing a lock of red hair from her face. Usually she didn’t care if her hair stuck straight up, but today was special. “We’re so lucky to get an invitation to Trident Academy. I didn’t think it would happen to me.”

Echo and Shelly both lived in Trident City, not far from the famous Trident Academy. They had been friends since they’d played together in the small-fry area of MerPark. The eight-year-old mermaids were celebrating their first day of school with breakfast at the Big Rock Café, a favorite hangout. The place was packed with students proudly wearing their Trident Academy sashes. The two mergirls didn’t see a third mergirl swimming up behind them. Her name was Pearl. Echo and Shelly usually tried to avoid the bossy mergirl from their neighborhood.

“Oh my Neptune!” Pearl snapped when she saw Shelly. “I can’t believe you, of all merpeople, got into Trident.” Usually only very wealthy or extremely smart students were accepted. Pearl was rich. Echo was a quick learner. Shelly was neither, but she knew more about ocean animals than both of them put together.

Echo came to her friend’s defense. “Of course Shelly got into Trident. She is very talented.”

“At what?” Pearl asked. “Digging for crabs?”

Shelly glanced at her dirty fingernails and immediately hid them under her blue tail fin. “At least I know how to hunt crabs. I bet you’d starve to death if you had to do something for yourself.”

Pearl flipped her blond hair, stuck her pointy nose up in the water, and said, “I know how to do plenty of things.”

“How to be on time for school, for starters,” she said. Pearl spun around and flicked her gold tail, knocking seaweed juice all over Shelly’s new Trident sash!

Pearl giggled and swam off toward school.

“Oh no!” Shelly squealed, dabbing green juice off the gold-and-blue sash. “She did that on purpose!”

Echo glared after Pearl before helping her friend wipe the sash. “It’s fine now. You can hardly see it,” Echo said. That wasn’t exactly true—there was definitely a green blob on Shelly’s sash.

“We’d better get going,” Echo said, adjusting the glittering plankton bow in her dark curly hair. “We don’t want to be late on our first day.”

Shelly groaned. She wasn’t quite so excited now. “If Trident Academy is filled with merpeople like Pearl, then I don’t think I’m going to like it.”

“There’s only one way to find out,” Echo said, taking a deep breath. “Let’s go.”

Debbie Dadey is an award-winning children’s book author who has written more than 150 books. She is best known for her series The Adventures of the Bailey School Kids, written with Marcia Thornton Jones. Debbie lives with her husband, her children, and three dogs in Sevierville, Tennessee.

Tatevik Avakyan has illustrated many books for children, including the Mermaid Tales series.