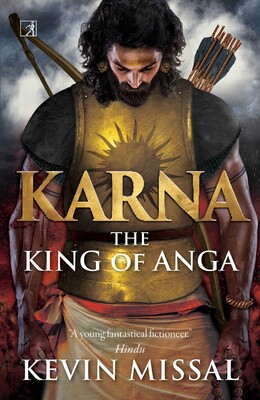 Born in the arms of the Ganga, Vasu grew up in the raging province of Anga. His life shaped by a fate that failed to be just—neglected by his own, stripped of his birthright—he was raised to be lost in an abyss of desires and disappointment.

Cursed by his guru, hurt by the only woman he loved, ostracised from society for being the son of a suta. With his only armour—hope—he ventured on an unforgettable journey. Alone.

This is Vasu’s tale of survival, of endurance, of abiding courage in the face of all adversities. And eventually, of blossoming into the greatest warrior of all time… KARNA.

In an ultimate battle against his archenemy—the insidious, dishonourable and all-powerful, Jarasandha, for a title he knew he deserved.

From a sutaputr to a leader of the people, this is a saga of betrayal, lost love, and glory.

This is the story of the King of Anga.

Two simultaneous arrows went for him.

Karna rolled over, pulling out his bow and arrow, and shooting instantly back from where it had come, as he skid further and moved for another rock, dragging himself to a tree.

“Have you forgotten how it was like? I had woken up early. Before dawn, and I had gone out to practice when I had seen you. You were practicing all night. And both of us drowsily smiled at each other and talked about archery, exchanged notes. It was like any other day and we should have fought because we were on opposite sides of the team. But at that time, we had no one around, and so we just behaved not like rivals, but like acquaintances—just two good students of archery. Do you remember that day?”

His breathing had intensified.

“I knew that day I was not talking to someone who just chose archery because he was gifted. I realised that day that I was not talking to a prodigy, with a gift, but a hardworking boy who wanted to do right by his talents. Who wanted to better himself,” Karna said, pulling an arrow on his bow. “I truly feel you are a born archer, Arjun. I do,” he paused, realising that his words…they were coming out of genuineness and honesty. “But you became a great archer by hardwork and sheer determination and only someone who truly loves this craft can do that. And because of this amazing gift of yours, you take it lightly. You think you do this because of some girl, but you are wrong.”

Karna saw Suyodhan. He was close. He had to grab him and make a move. But Suyodhan was heavy and his thoughts were running fast. “You do this because you love it but you are just too afraid to say it. You feel putting the weight of this gift of archery and your work towards it on someone else, will make it less of a burden…well, someone as talented as you is afraid, at the end of the day. To be not a…”

An arrow smacked against the branch of the tree and went past its trunk, just inches away from Karna’s eye, as he withdrew.

“Drona wanted to take over the kingdom for his son Ashwatthama,” Karna said, finally, as he realised he had to come out with the truth.

And with it, he stepped out of the cover his hands up as he tossed his weapon on the side.

“If you want to kill me, kill me,” he said, walking up to Suyodhan, one step a time. “But you must hear me out. Drona took the kingdom for his son, to give him a place because the Maharaja was clearly not going to give Ashwatthama anything. He’s no royal blood, so Drona took it for his son. That is why he attacked Draupad. It was not because he was wrong. And I know you are here because of him,” he said. “He must have asked you to disperse with me and said he would give you my position. Well, I suppose you are wrong there too. He won’t.”

Karna had reached closer to Suyodhan, who was lying wasted on the ground, all battered and wounded—tortured to the extent that he would need several days of rest even if he was rescued.

“He’ll give it to Ashwatthama,” Karna said. “No matter how much he treats you like his son, Arjun, you are not his son. Ashwatthama is.”

Karna paused. Waiting for a response. But he only saw tall, giant trees in front of him. “At the end, you have to make a decision. About what to do now. Is killing a good option, or being the better person? It’s quite easy to raise a bow and shoot an arrow, but it’s the most difficult thing to let go. Of your vices. Of your…” he paused, realising that he himself had led an entire battle against Jarasandha for revenge. Was it right? He didn’t know. “Be yourself, Arjun. Strive for individuality and try not be influenced by the wrongdoers. One day you might be guided by the right person, but it is not today.”

Karna went to grab hold of Suyodhan and he lifted him on his back. “I’m going to turn and leave now,” he loudly declared. “But I just want to say something which I never have…” he almost teared up, “…no matter how much we hate each other, I will respect you as an archer more than anything. And one day we might have a duel, but again…today is not that day. Today is the day I kill Jarasandha. Our fight is saved for the future. Sooner or later, I don’t know when, but it will happen.”

And Karna moved ahead, with the heavy Suyodhan on his back, moving for his stallion.

And there was no arrow flung towards him, except one that slammed next to Karna’s feet.

But he knew it was not an attack. It was to bid Karna farewell.

Because I know he never misses an open target.