Star Trek: Voyager (VOY) focuses on the twenty-fourth century adventures of Captain Kathryn Janeway aboard the USS Voyager. Smaller than either Kirk's or Picard's starships—its crew complement is only 150—Voyager is fast and powerful, and has the ability to land on a planet's surface. It is one of the most technologically advanced vessels in Starfleet, utilizing computer circuitry that incorporates synthetic neural tissue. Ironically, Janeway's inaugural mission aboard Voyager was to be her last in the Alpha quadrant. While attempting to capture the crew of a renegade Maquis vessel, both her ship and that of the Maquis were pulled into the distant Delta quadrant by powerful alien technology. Unfortunately, there would be no similar express route to take them home again. Stranded 70,000 light-years from Earth, Janeway convinced the Maquis to join her Starfleet crew and serve together during the long voyage back to Federation space. 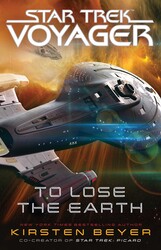 To Lose the Earth
By Kirsten Beyer
The long-awaited follow-up to Voyager: Architects of Infinity from the New York Times bestselling author and cocreator of Star Trek: Picard!

As the crew of the Full Circle fleet works to determine the fate of their lost ship, the Galen, a struggle for...