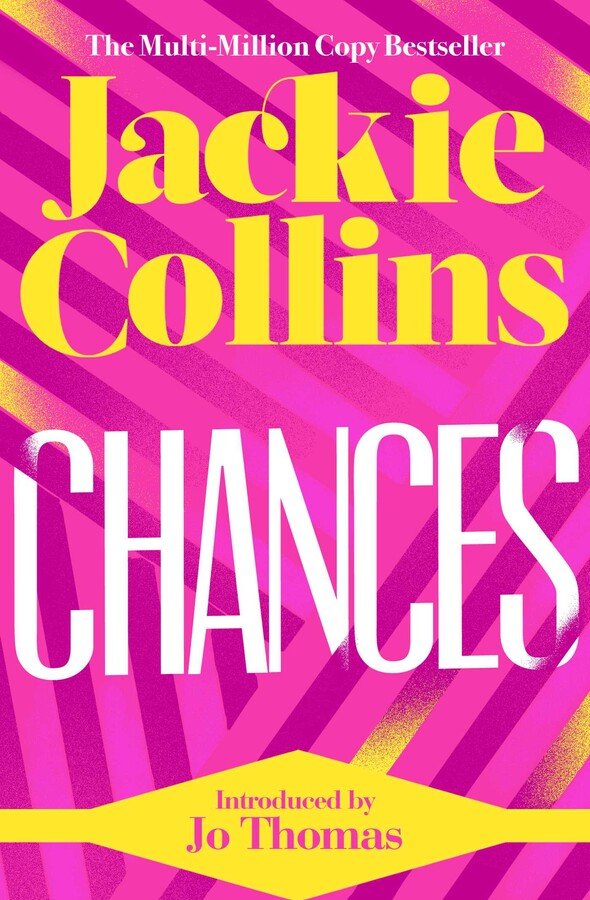 Featuring a new introduction from bestselling author, Jo Thomas, talking about what Jackie and her books mean to her!

‘Jackie’s skill as a writer is enviable. Rereading Chances I was totally hooked in from the start, into all the lives that were playing out in front of me’ JO THOMAS

The book that made Jackie Collins one of Britain's favourite authors sweeps you from the sophisticated playgrounds of Europe to the glittering gambling palaces of Las Vegas. It plunges you into the reckless, dangerous world of the Santangelo crime family. It introduces you to Gino Santangelo, the street kid who makes it all the way to the top. And then it brings you Lucky - his sensual and passionate daughter; a woman who dares to win her father's empire for herself; a woman unafraid of taking CHANCES.

There have been many imitators, but only ever one Jackie Collins.  With millions of her books sold around the world, and thirty-one New York Times bestsellers, she is one of the world’s top-selling novelists. From glamorous Beverly Hills bedrooms to Hollywood movie studios; from glittering rock concerts to the yachts of billionaires, Jackie chronicled the scandalous lives of the rich, famous, and infamous from the inside looking out.

'A true inspiration, a trail blazer for women's fiction' JILLY COOPER
‘Jackie shows us all what being a strong, successful woman means at any age’ MILLY JOHNSON
‘Jackie will never be forgotten, she’ll always inspire me to #BeMoreJackie’ JILL MANSELL
‘Legend is a word used too lightly for so many undeserving people, but Jackie is the very definition of the word’ ALEX KHAN
‘What Jackie knew how to do so well, is to tell a thumping good story’ ROWAN COLEMAN
‘Here is a woman who not only wanted to entertain her readers, but also to teach them something; about the world and about themselves’ ISABELLE BROOM
‘Lessons galore on every page… about feminism, equality, tolerance and love’ CARMEL HARRINGTON
‘Nobody does it quite like Jackie and nobody ever will’ SARRA MANING
‘Jackie wrote about Hollywood with total authenticity, breaking all the rules and taboos’ BARBARA TAYLOR BRADFORD
‘Collins was saying that women didn’t have to centre round men, either in books or in life’ JESSIE BURTON
‘Jackie lived the Hollywood dream, but, she looked sideways at it, and then shared the dirt with her readers’ JULIET ASHTON
‘What radiates from her novels, is a sense that women are capable of great things’ ALEXANDRA HEMINSLEY

Jackie Collins has been called a “raunchy moralist” by the director Louis Malle and “Hollywood’s own Marcel Proust” by Vanity Fair. With over 500 million copies of her books sold in more than forty countries, and with thirty-two New York Times bestsellers to her credit, she is one of the world’s top-selling novelists. Six of her novels have been adapted for film or TV. Collins was awarded an OBE (Order of the British Empire) by the Queen of England in 2013 for her services to literature and charity. When accepting the honor she said to the Queen, “Not bad for a school drop-out”—a revelation capturing her belief that both passion and determination can lead to big dreams coming true. She lived in Beverly Hills where she had a front row seat to the lives she so accurately captured in her compulsive plotlines. She was a creative force, a trailblazer for women in fiction, and in her own words “a kick-ass writer!” Her fascinating life as a writer and icon is explored in the CNN Films documentary Lady Boss: The Jackie Collins Story.

SEE ALL
See more by Jackie Collins
Thank you for signing up, fellow book lover!