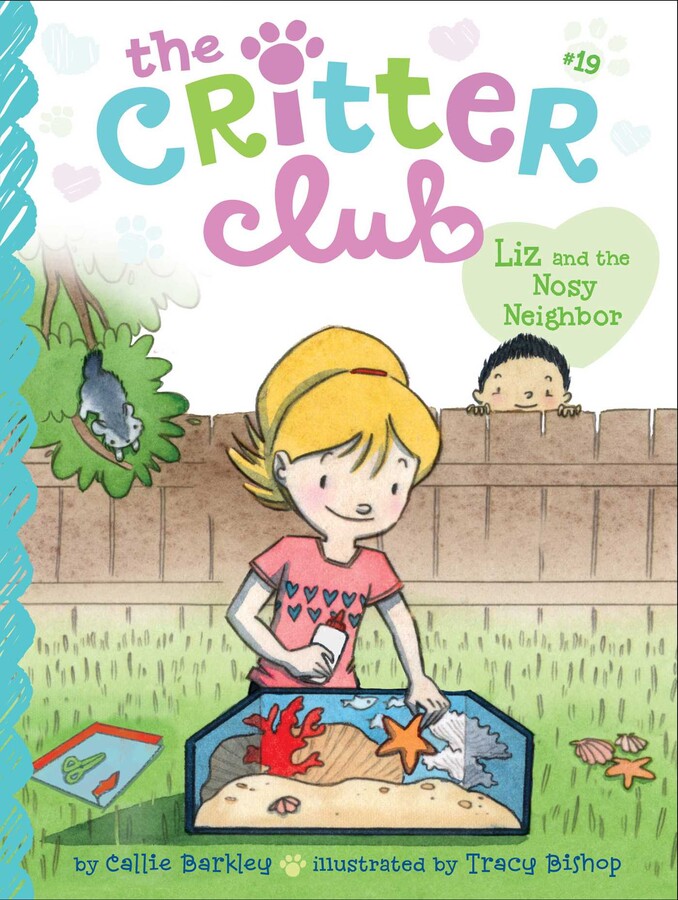 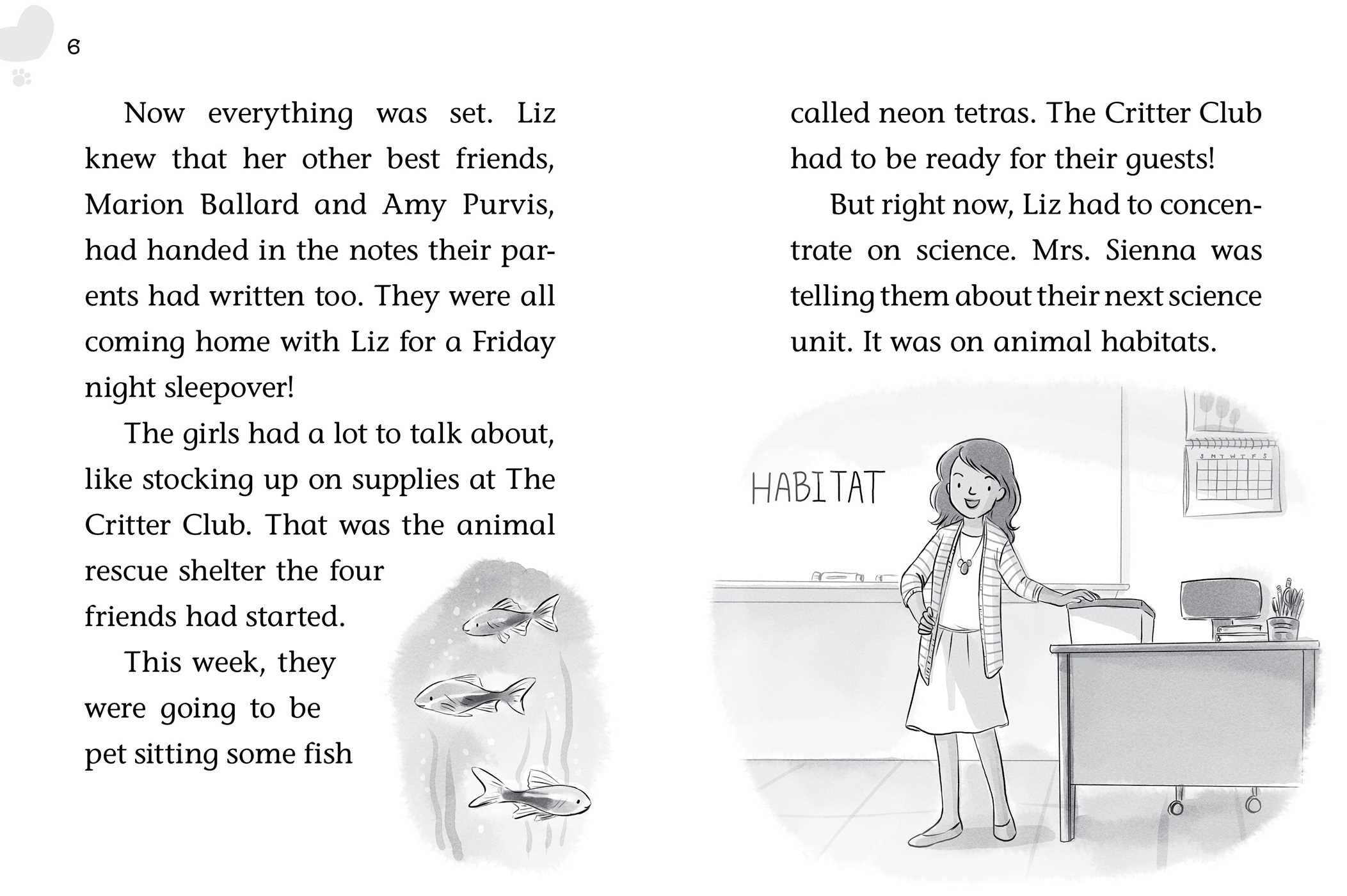 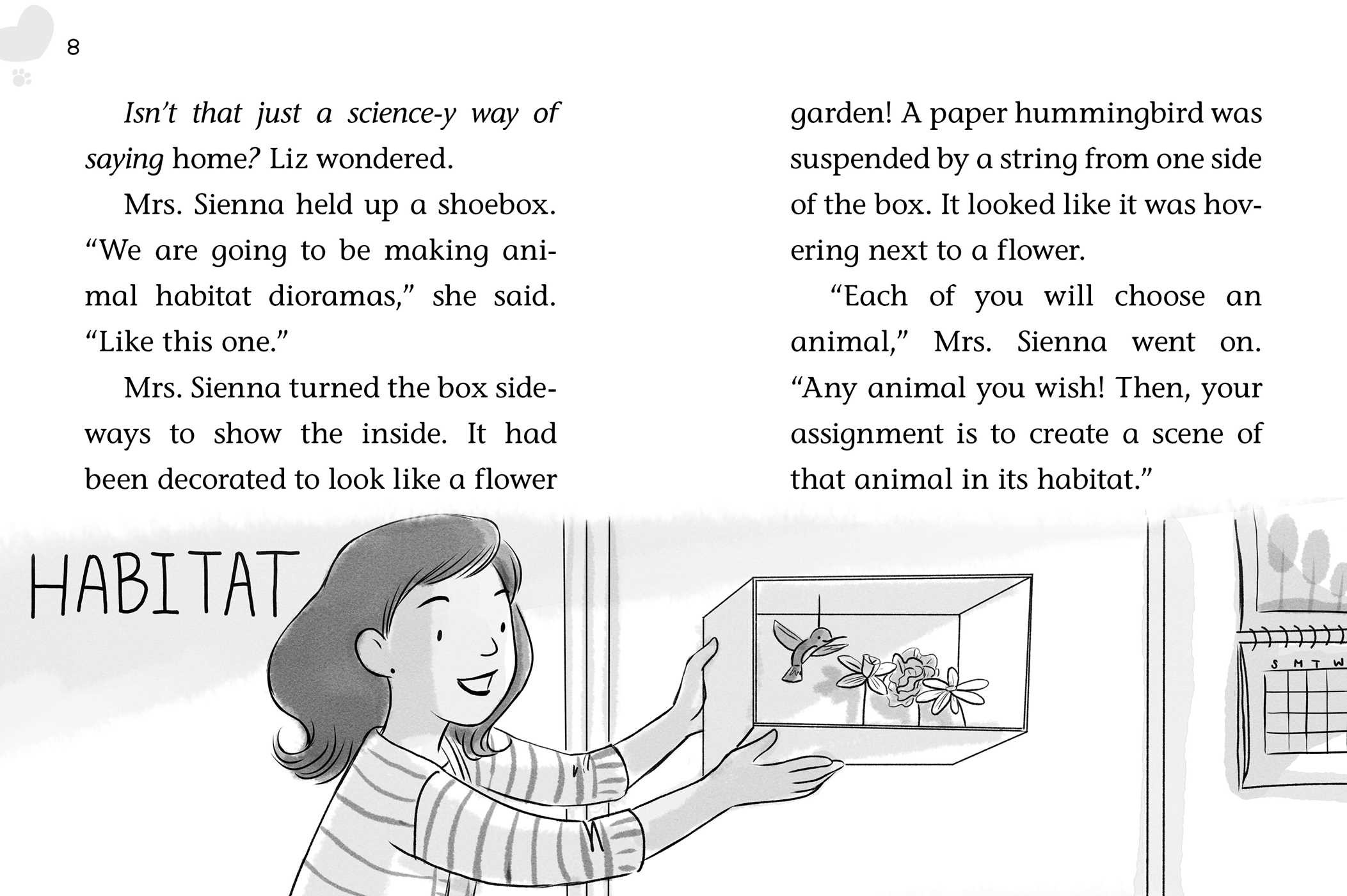 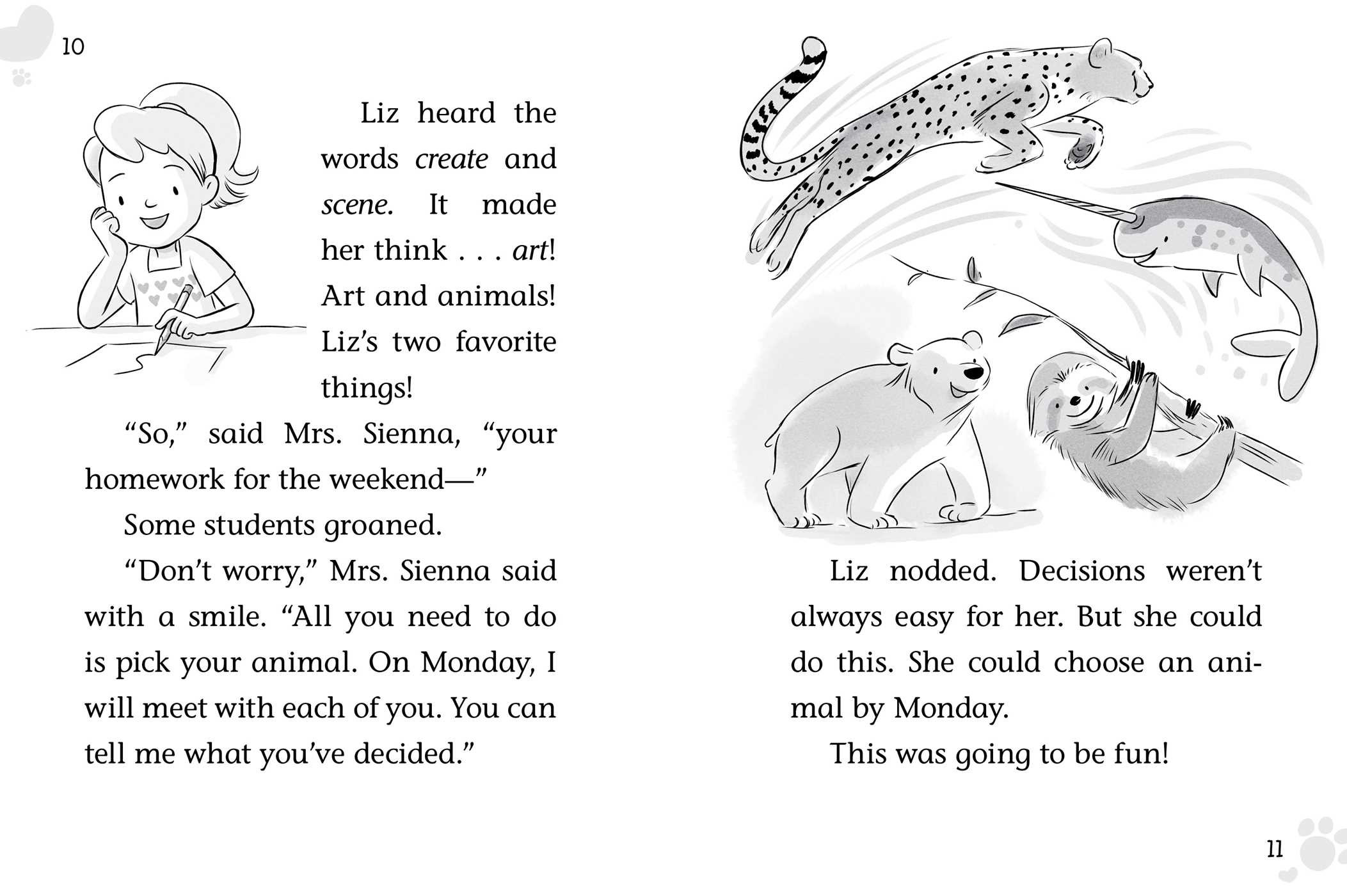 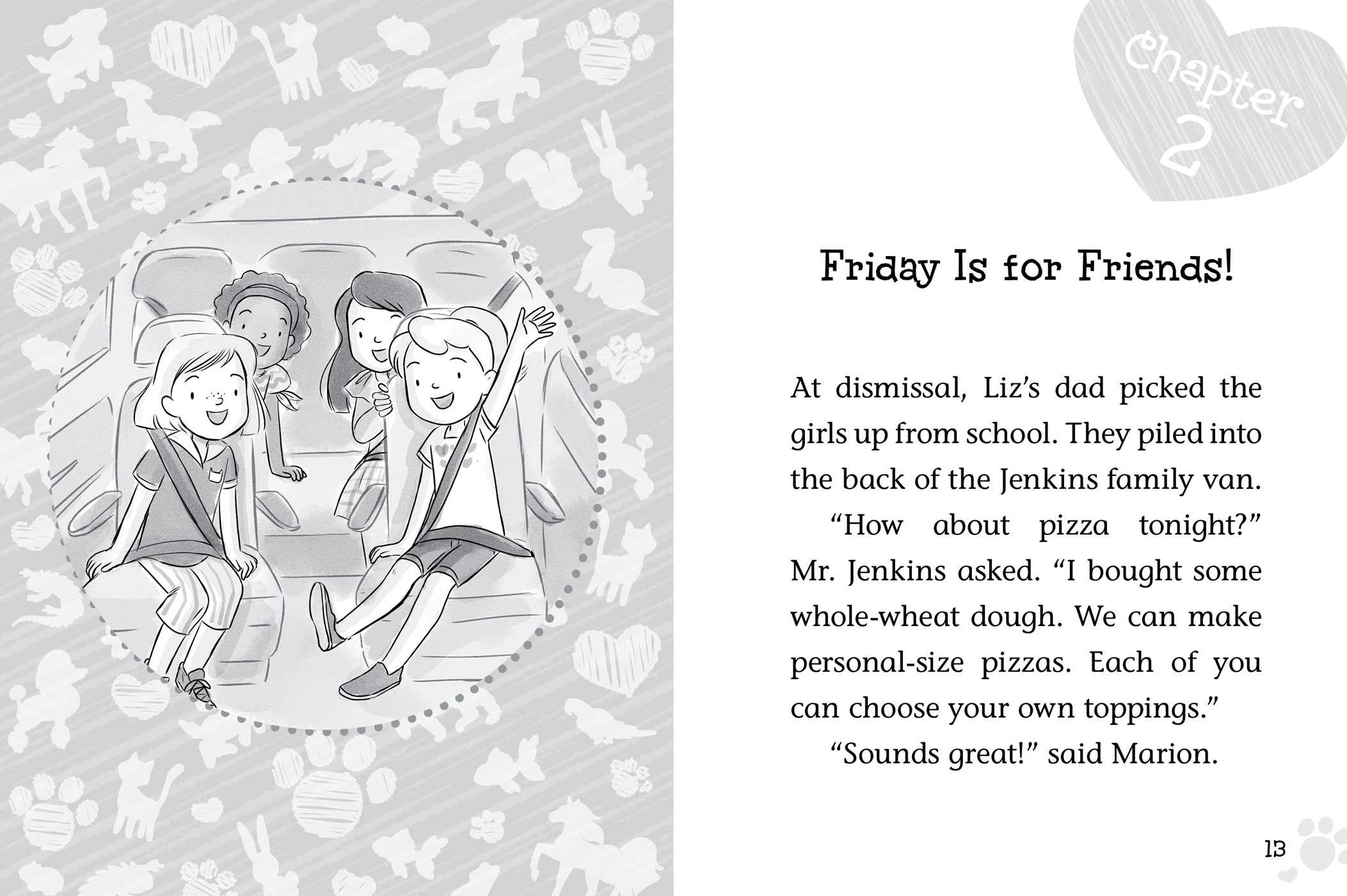 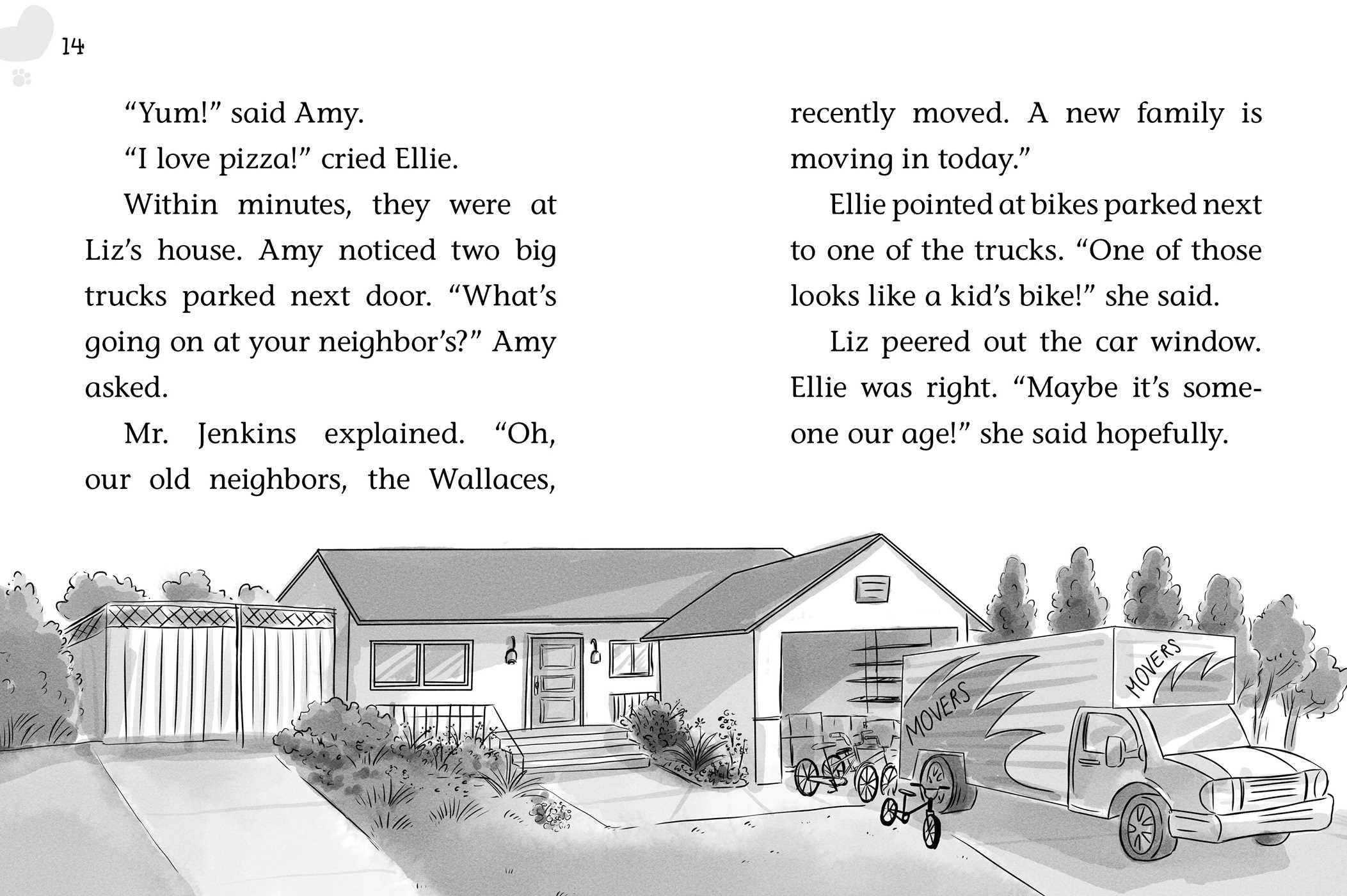 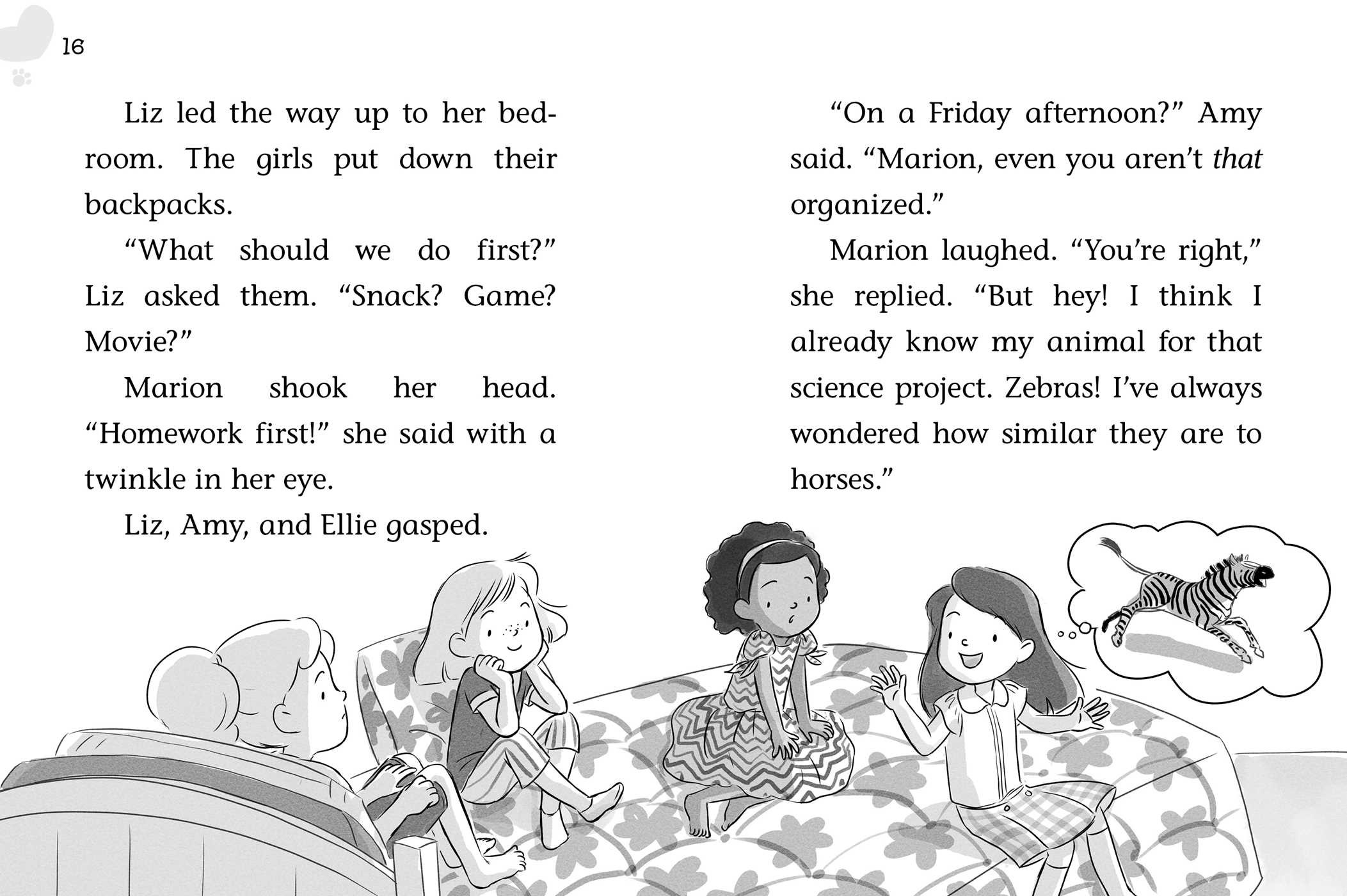 Book #19 of The Critter Club
By Callie Barkley
Illustrated by Tracy Bishop
LIST PRICE ₹299.00
PRICE MAY VARY BY RETAILER

Liz has a big class project to complete but how can she focus on it when her nosy new neighbor seems to be popping up everywhere? Liz must solve both problems in the nineteenth book of the Critter Club series.

When a boy Liz’s age moves in next door, Liz hopes they might become friends. But right away Liz can tell the boy has no interest in being friendly. So why does he keep showing up everywhere she is? Plus, Liz has a big class project to complete—an animal habitat diorama—but she can’t think of anything to create and her nosy new neighbor isn’t helping!

With easy-to-read language and illustrations on almost every page, The Critter Club chapter books are perfect for beginning readers!

Chapter 1 Art Is Everywhere
Liz Jenkins opened her locker. She reached inside and unzipped her backpack.

Her best friend Ellie Mitchell appeared at her side. “Can I see how it turned out?” Ellie asked.

The whole class had just come from the art room. They had finished their cut-paper collages—a project they’d worked on for a few weeks. Liz was excited to take hers home.

Liz smiled. “Aw, thanks, Ellie,” she said. She asked to see Ellie’s art. It was ablaze with reds, oranges, and yellows. “I love the colors!” Liz exclaimed.

“Me too,” Ellie agreed. “But I wasn’t really thinking about the pattern. Yours is so planned out.”

Liz had put a lot of thought into the layout. She was going for a swirly, Starry Night look. Like Vincent Van Gogh, one of her favorite artists.

Just then, their teacher, Mrs. Sienna, poked her head into the hallway. “Come in and let’s get settled for science,” she told them.

So Liz and Ellie put their artwork in their lockers. “Ellie,” Liz whispered as they walked into class, “did you give Mrs. Sienna your note?”

“I almost forgot!” Ellie pulled a piece of paper out of her pocket. “I’ll do it now.”

Now everything was set. Liz knew that her other best friends, Marion Ballard and Amy Purvis, had handed in the notes their parents had written too. They were all coming home with Liz for a Friday night sleepover!

The girls had a lot to talk about, like stocking up on supplies at The Critter Club. That was the animal rescue shelter the four friends had started.

This week, they were going to be pet sitting some fish called neon tetras. The Critter Club had to be ready for their guests!

But right now, Liz had to concentrate on science. Mrs. Sienna was telling them about their next science unit. It was on animal habitats.

Mrs. Sienna held up a shoebox. “We are going to be making animal habitat dioramas,” she said. “Like this one.”

Mrs. Sienna turned the box sideways to show the inside. It had been decorated to look like a flower garden! A paper hummingbird was suspended by a string from one side of the box. It looked like it was hovering next to a flower.

“Each of you will choose an animal,” Mrs. Sienna went on. “Any animal you wish! Then, your assignment is to create a scene of that animal in its habitat.”

Liz heard the words create and scene. It made her think . . . art! Art and animals! Liz’s two favorite things!

“So,” said Mrs. Sienna, “your homework for the weekend—”

“Don’t worry,” Mrs. Sienna said with a smile. “All you need to do is pick your animal. On Monday, I will meet with each of you. You can tell me what you’ve decided.”

Liz nodded. Decisions weren’t always easy for her. But she could do this. She could choose an animal by Monday.

This was going to be fun!
Callie Barkley

Callie Barkley loves animals. As a young girl, she dreamed of getting a cat or dog of her own until she discovered she was allergic to most of them. It was around this time that she realized the world was full of all kinds of critters that could use some love. She now lives with her husband and two kids in Connecticut. They share their home with exactly ten fish and a very active ant farm.

Tracy Bishop has loved drawing since she was a little girl in Japan. She spends her time illustrating books, reading, and collecting pens. She lives with her husband, son, and hairy dog, named Harry, in San Jose, California.

Book #19 of The Critter Club
By Callie Barkley
Illustrated by Tracy Bishop
LIST PRICE ₹299.00
PRICE MAY VARY BY RETAILER