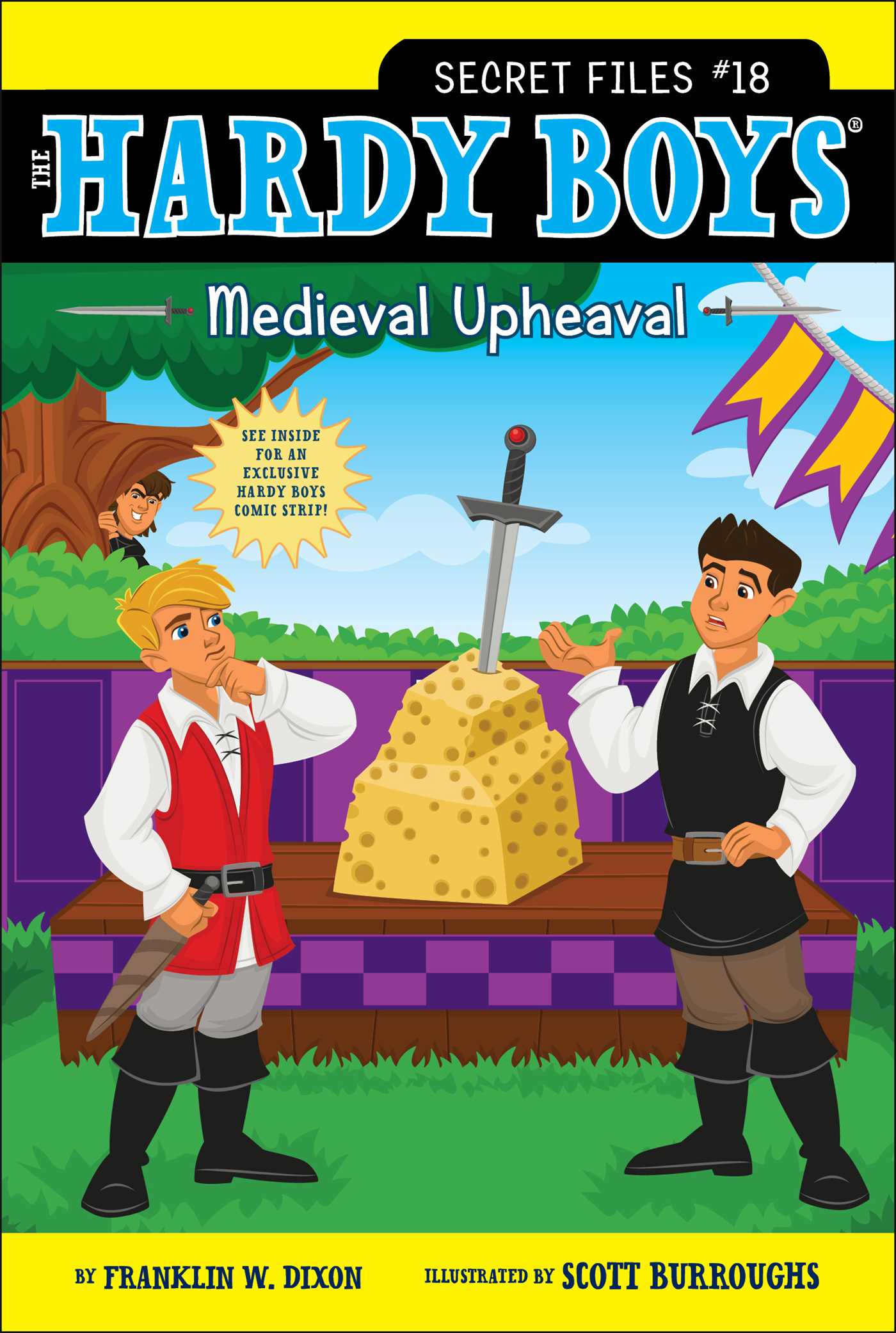 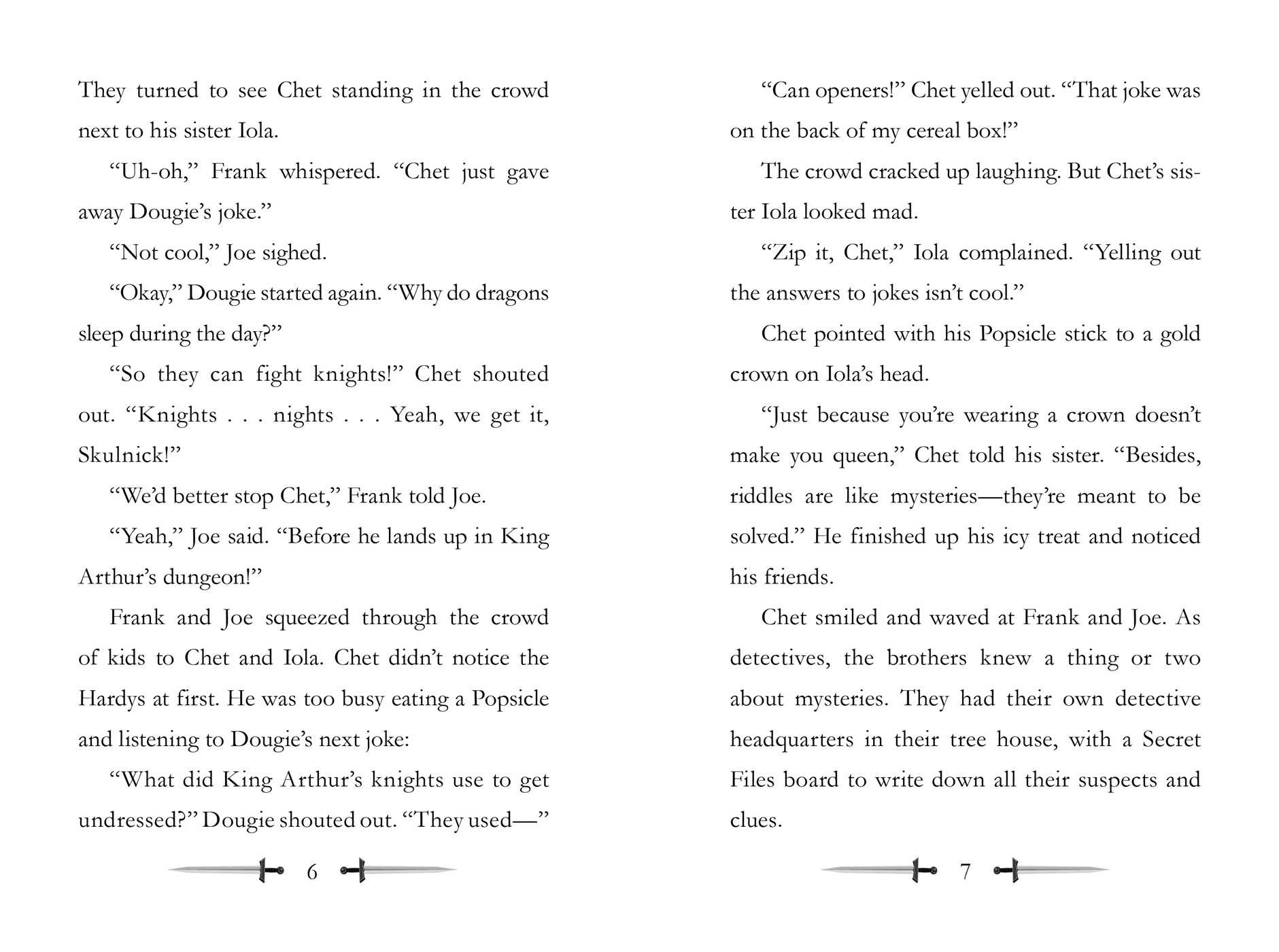 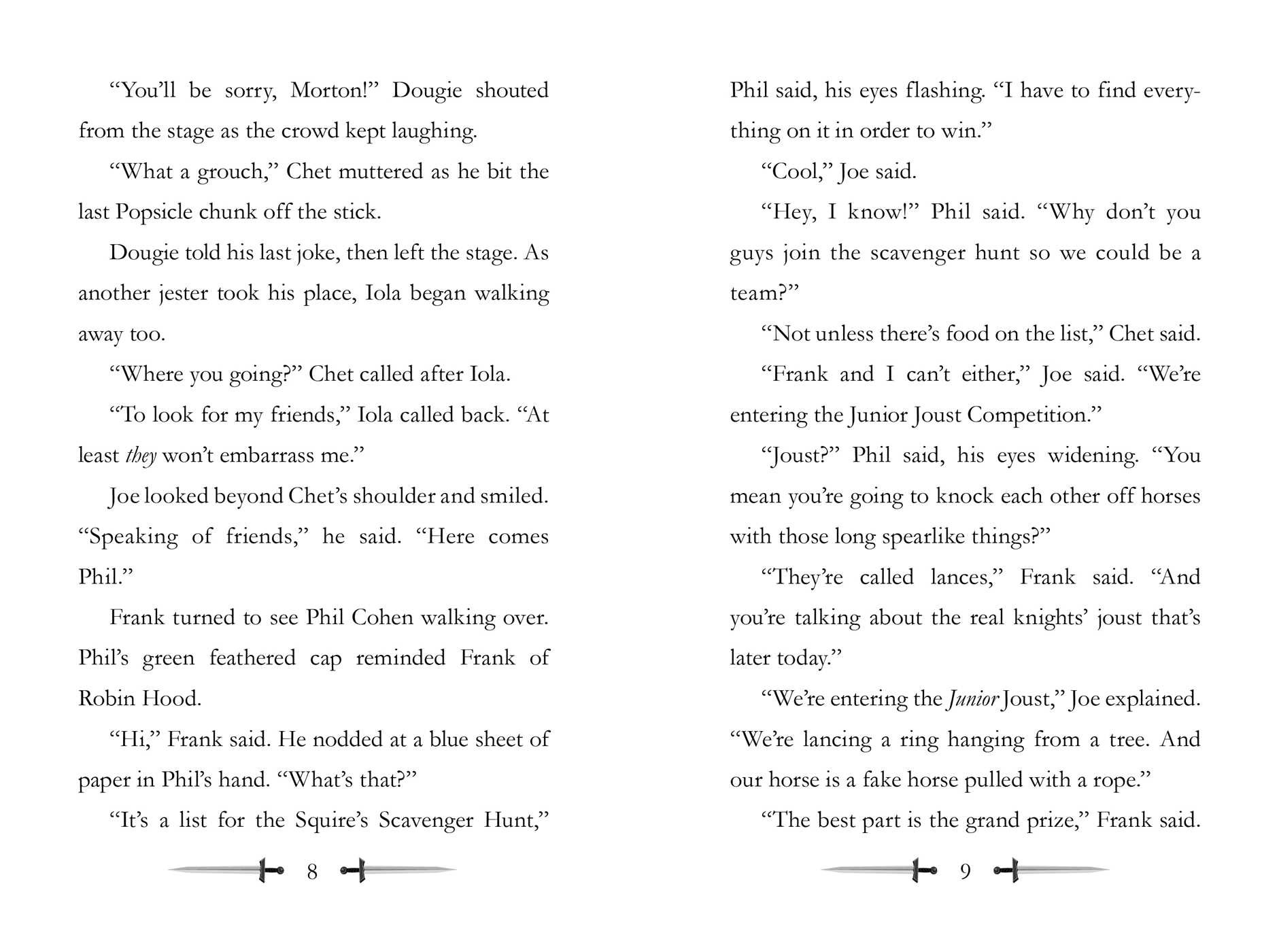 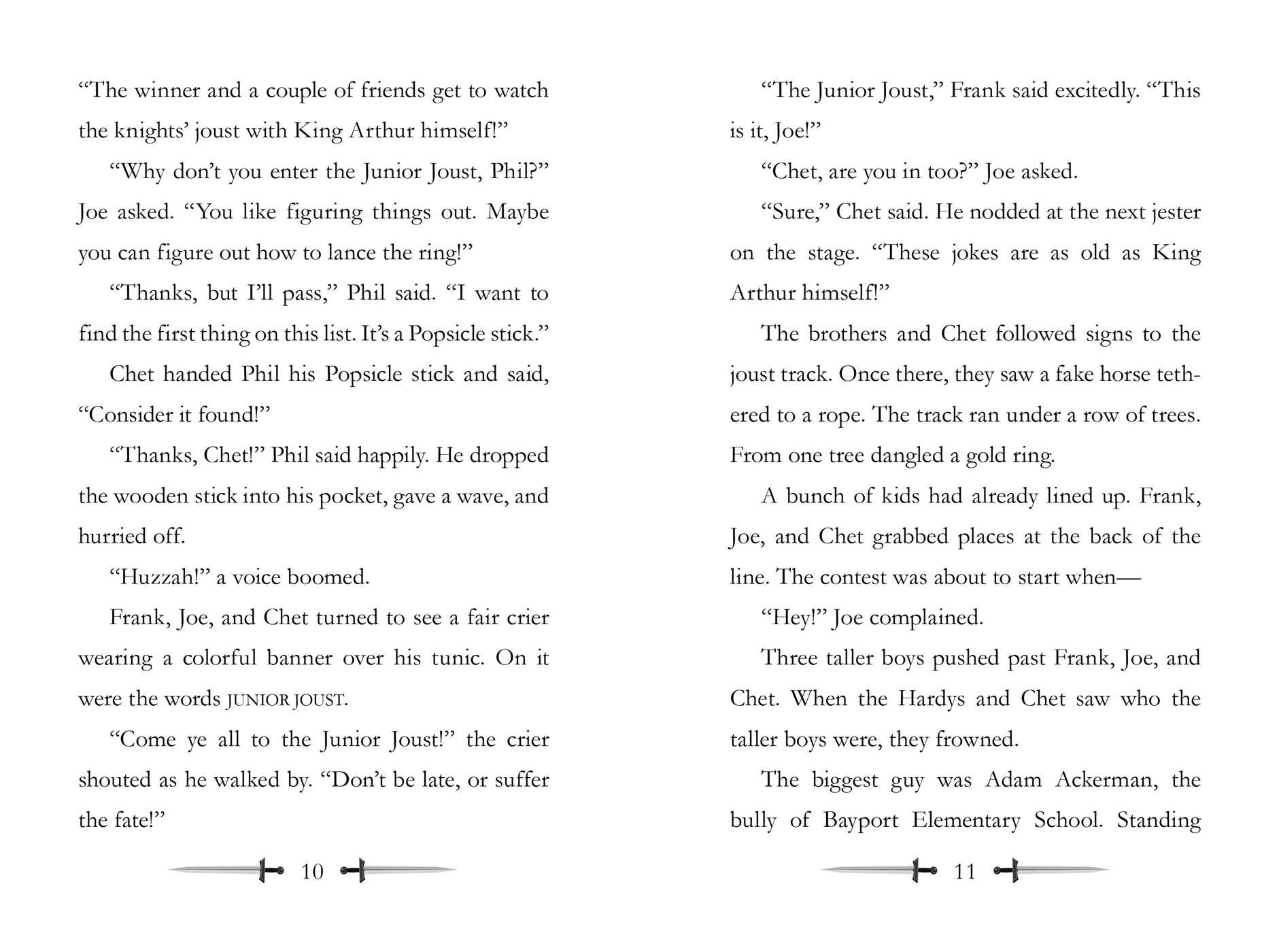 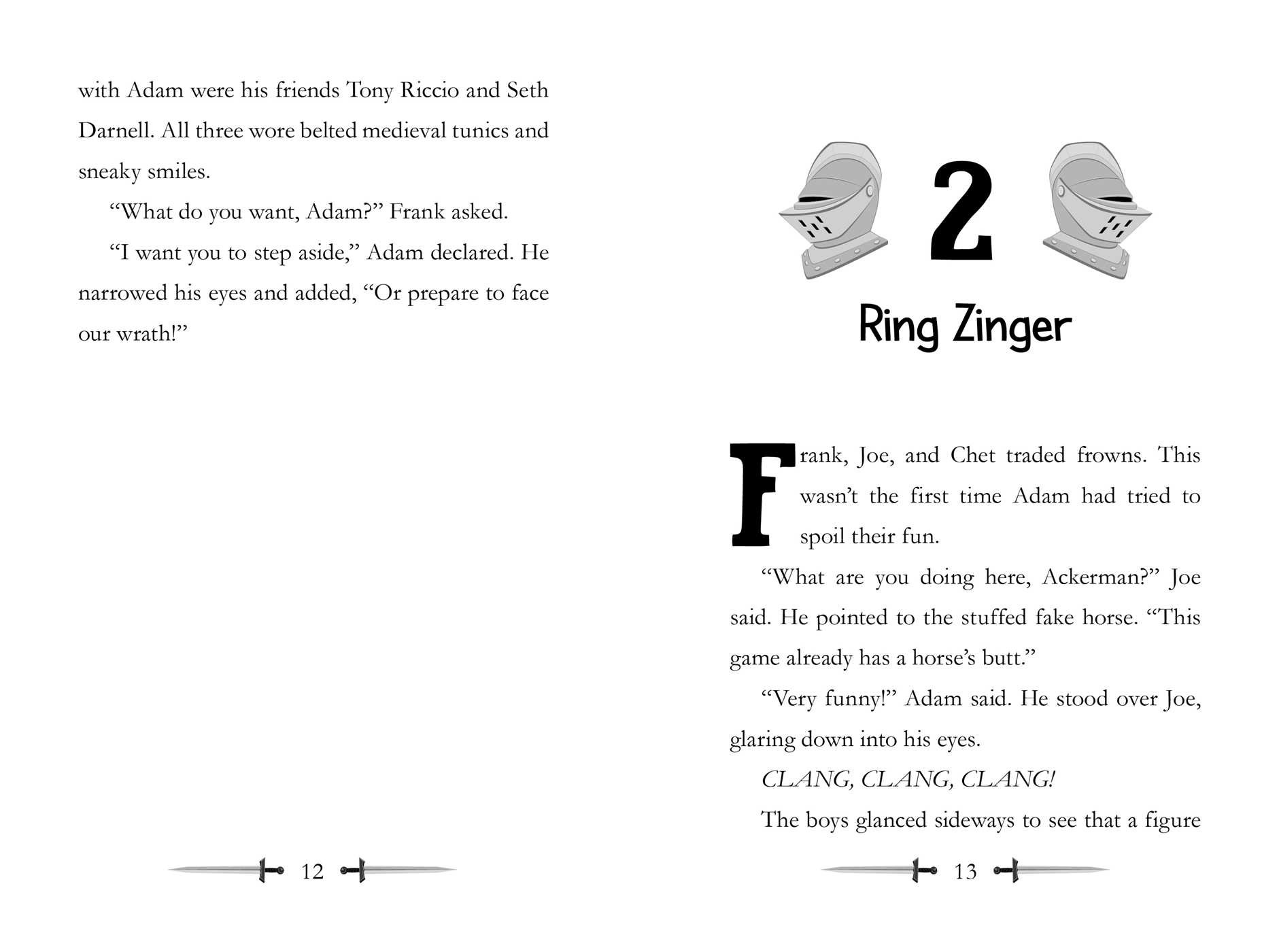 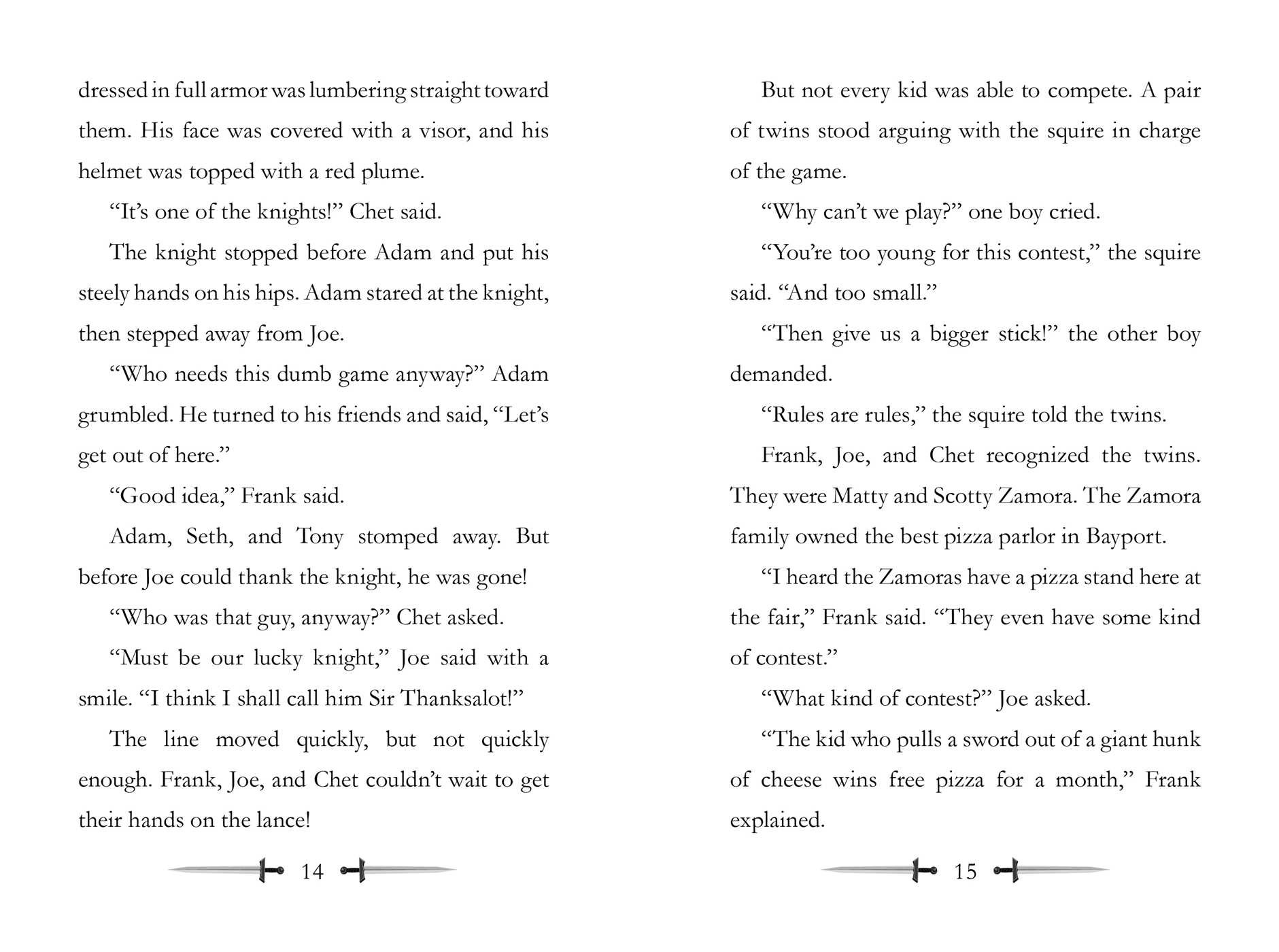 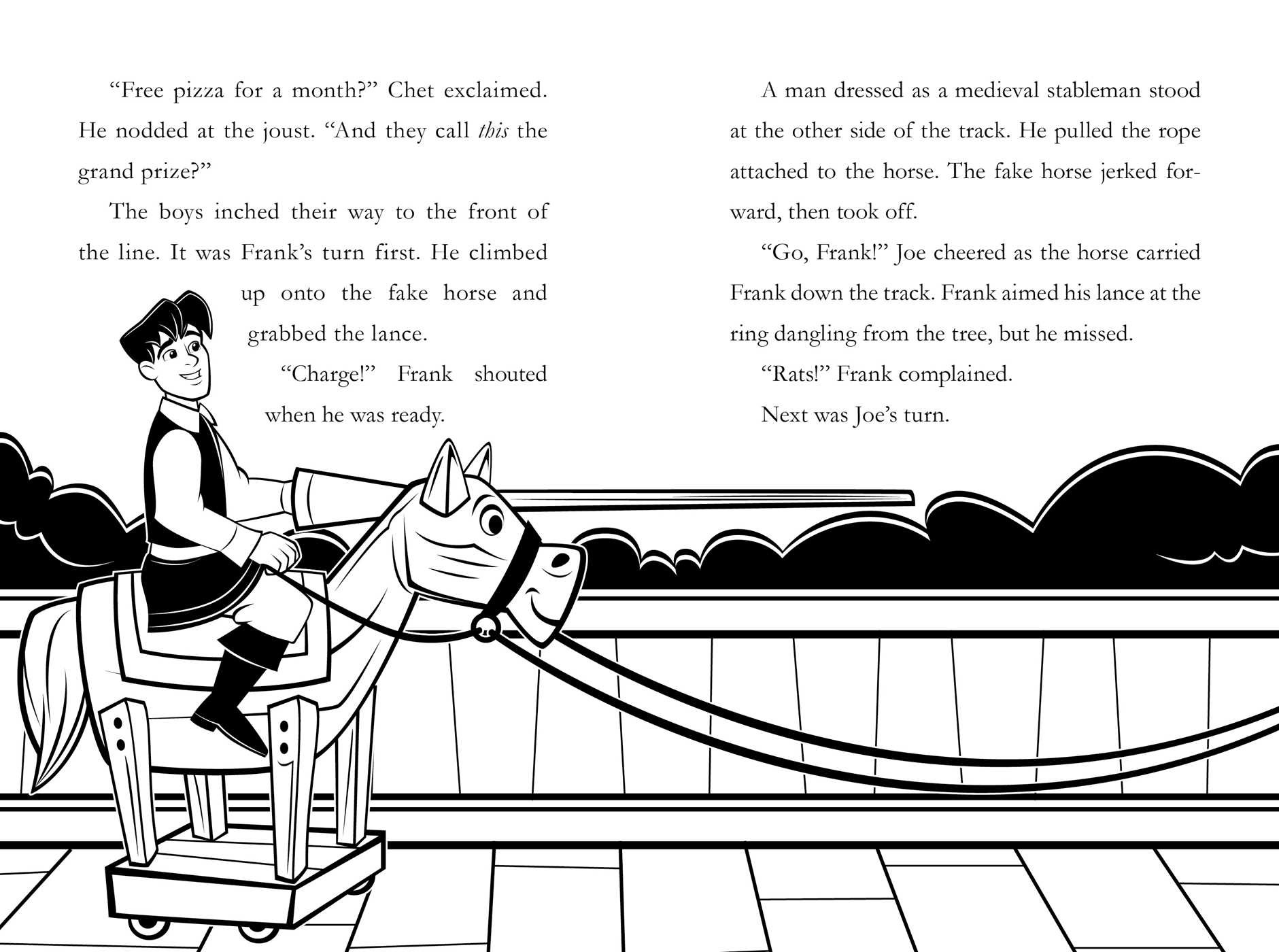 A medieval faire brings the past to life—and a mystery to the present—in this Hardy Brothers Secret Files adventure.

Frank and Joe Hardy are excited to visit the King Arthur Faire in Bayport. On Kid’s Day, there are all kinds of special contests and events, like the Medieval Maze and Junior Jester Court Slam. The highlight of the day is the Junior Joust competition: whoever can stay on a mechanical horse and lance a golden ring with their (fake) sword will win seats to watch the real jousting competition later in the day.

To everyone’s surprise (and delight) Joe and Frank’s friend, Chet Morton, manages to lance the ring and beat out town bully, Adam Ackerman. But after celebrating the win at a pizza stand, Chet discovers his ring—and ticket for the grand prize—is missing! Can Joe and Frank figure out who is the rogue knight before the big show?

Medieval Upheaval 1 Jesters and Jousters
Hey, Frank,” eight-year-old Joe Hardy called to his brother. “I just saw two knights in armor, a minstrel, a queen, and a court jester, all in the last five minutes!”

“So are you sure we didn’t go back in time?” Joe asked with smile.

Nine-year-old Frank pointed to a row of snack stands. “They didn’t have slushie machines and cotton candy in the Middle Ages, did they?” he asked.

Joe really did know where they were. He and Frank were at the King Arthur Fair. The medieval fair came to Bayport every summer. That was when the park was made to look like a huge marketplace from the days of King Arthur.

There were jugglers, puppeteers, and musicians, all dressed in medieval clothes. But there was only one special Kids Day—and that was today!

“It’s cool that Aunt Gertrude left us on our own,” Frank said.

Joe nodded. Aunt Gertrude was their dad’s sister who lived in the Hardys’ garage apartment. Their aunt was fun to be around, but it was also fun to be on their own!

“Now we can do whatever we want here at the fair,” Joe said. “Like enter the Junior Joust. And run through the Medieval Maze!”

“The Medieval Maze?” Frank said with a snort. “Your squirty legs will never get you over the muck pit at the end. You’ll be totally covered with mud!”

“Maybe that’s what this fair needs,” Joe said with a shrug. “A medieval mud monster!”

As the brothers walked on, they passed two knights in armor. One knight’s steely glove clanged as he waved.

“We should have dressed up like knights, Frank,” Joe said. “Not in these dresses and tights!”

“They’re called ‘tunics,’ ” Frank said. “And even knights wore them under their armor.”

The brothers were about to check out an acrobat show when they heard the sound of laughter in the distance.

Frank and Joe followed the sound to a stage set up between two trees. A banner hanging over the stage read JESTER JOKE SLAM.

“That must be the joke contest!” Joe said. “The winner gets to be Junior Jester of the fair!”

A boy stood onstage, already dressed like a jester. The bells on his cap and shoes jingled each time he moved.

“Hey, I know him!” Frank said. “That’s Dougie Skulnick from my class.”

A crowd of kids stood before the stage as Dougie shouted out a joke: “Why did King Arthur have a round table?”

“So he wouldn’t get cornered!” a boy’s voice yelled out.

Frank and Joe would have known that voice anywhere. It belonged to their friend Chet Morton. They turned to see Chet standing in the crowd next to his sister Iola.

“Okay,” Dougie started again. “Why do dragons sleep during the day?”

“Yeah,” Joe said. “Before he lands up in King Arthur’s dungeon!”

Frank and Joe squeezed through the crowd of kids to Chet and Iola. Chet didn’t notice the Hardys at first. He was too busy eating a Popsicle and listening to Dougie’s next joke:

“What did King Arthur’s knights use to get undressed?” Dougie shouted out. “They used—”

“Can openers!” Chet yelled out. “That joke was on the back of my cereal box!”

“Zip it, Chet,” Iola complained. “Yelling out the answers to jokes isn’t cool.”

Chet pointed with his Popsicle stick to a gold crown on Iola’s head.

“Just because you’re wearing a crown doesn’t make you queen,” Chet told his sister. “Besides, riddles are like mysteries—they’re meant to be solved.” He finished up his icy treat and noticed his friends.

Chet smiled and waved at Frank and Joe. As detectives, the brothers knew a thing or two about mysteries. They had their own detective headquarters in their tree house, with a Secret Files board to write down all their suspects and clues.

“You’ll be sorry, Morton!” Dougie shouted from the stage as the crowd kept laughing.

“What a grouch,” Chet muttered as he bit the last Popsicle chunk off the stick.

Dougie told his last joke, then left the stage. As another jester took his place, Iola began walking away too.

“Where you going?” Chet called after Iola.

“To look for my friends,” Iola called back. “At least they won’t embarrass me.”

“It’s a list for the Squire’s Scavenger Hunt,” Phil said, his eyes flashing. “I have to find everything on it in order to win.”

“Hey, I know!” Phil said. “Why don’t you guys join the scavenger hunt so we could be a team?”

“Not unless there’s food on the list,” Chet said.

“Frank and I can’t either,” Joe said. “We’re entering the Junior Joust Competition.”

“Joust?” Phil said, his eyes widening. “You mean you’re going to knock each other off horses with those long spearlike things?”

“We’re entering the Junior Joust,” Joe explained. “We’re lancing a ring hanging from a tree. And our horse is a fake horse pulled with a rope.”

“The best part is the grand prize,” Frank said. “The winner and a couple of friends get to watch the knights’ joust with King Arthur himself!”

“Why don’t you enter the Junior Joust, Phil?” Joe asked. “You like figuring things out. Maybe you can figure out how to lance the ring!”

“Thanks, but I’ll pass,” Phil said. “I want to find the first thing on this list. It’s a Popsicle stick.”

“Thanks, Chet!” Phil said happily. He dropped the wooden stick into his pocket, gave a wave, and hurried off.

Frank, Joe, and Chet turned to see a fair crier wearing a colorful banner over his tunic. On it were the words JUNIOR JOUST.

“Come ye all to the Junior Joust!” the crier shouted as he walked by. “Don’t be late, or suffer the fate!”

“The Junior Joust,” Frank said excitedly. “This is it, Joe!”

“Sure,” Chet said. He nodded at the next jester on the stage. “These jokes are as old as King Arthur himself!”

The brothers and Chet followed signs to the joust track. Once there, they saw a fake horse tethered to a rope. The track ran under a row of trees. From one tree dangled a gold ring.

A bunch of kids had already lined up. Frank, Joe, and Chet grabbed places at the back of the line. The contest was about to start when—

Three taller boys pushed past Frank, Joe, and Chet. When the Hardys and Chet saw who the taller boys were, they frowned.

The biggest guy was Adam Ackerman, the bully of Bayport Elementary School. Standing with Adam were his friends Tony Riccio and Seth Darnell. All three wore belted medieval tunics and sneaky smiles.

“What do you want, Adam?” Frank asked.

“I want you to step aside,” Adam declared. He narrowed his eyes and added, “Or prepare to face our wrath!”
Franklin W. Dixon