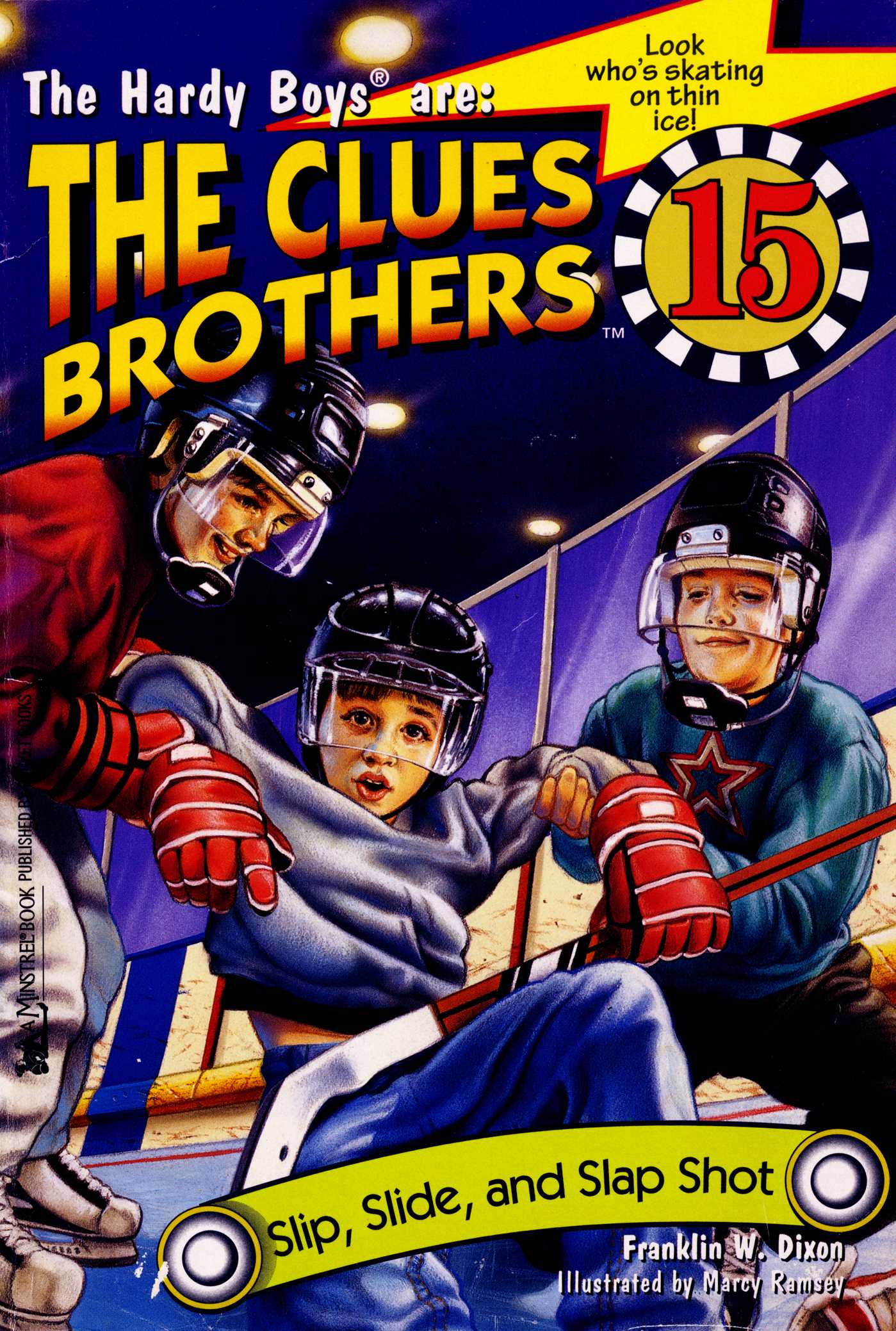 It’s not easy playing hockey when you can barely skate. But Frank and Chet are determined to keep Joe on the team. Even after Joe accidentally slams a slap shot straight into Jamie, a star figure skater. Jamie’s furious. Then she accuses Joe of stealing her good luck charm, a fuzzy white seal.

Joe and Frank are determined to find the mascot—and the thief. If they don’t, Jamie can’t skate—and Joe’s in the penalty box for good!

Chapter 1: Slap Shot Superman
"Hey, Mom, Dad, guess what?" Frank Hardy burst in through the kitchen door. A big gust of wind swept in with him. It sent napkins swirling off the table his brother, Joe, was just setting for dinner.
"Hey, watch it!" Joe yelled. He grabbed at the napkins.
"Whoa there, tornado!" Mr. Hardy looked up from tossing the salad. "Where's the fire?"
"Dad -- you'll never believe this," Frank began.
Mr. Hardy held up his hand. "You don't have to yell, Frank. We're right here in the same room."
"Sorry, but it's such great news."
"Then don't just stand there -- tell us!" Joe yelled as loudly as Frank had.
Frank grinned. "Chet's dad is going to coach a hockey team -- real ice hockey. He used to play hockey when he was in college. So can I sign up? The first practice is tomorrow night."
Mrs. Hardy looked across at her husband. "I don't see why not," she said.
"I think it's a good idea," Mr. Hardy agreed. "You boys should play some kind of winter sport. I don't like it when you're stuck in the house. And hockey is fun."
"Me, too?" Joe asked. "If Frank's going to play hockey, I want to also."
"I don't know, Joe." Frank frowned. "Only fourth graders are on the team. It might be kind of rough for you."
"Hey, I'm tough. I can take anything you can take. Right, Dad?" Joe stared Frank straight in the eye.
"But you don't know how to skate," Frank said.
"I do, too. Remember we went skating last winter?"
"Once," Frank said. "And you spent most of the time sitting down."
"I'm a quick learner," Joe said. "And you don't know how to skate any better than me."
"I do so," Frank said. "I've been practicing with Chet's in-line skates.
They're almost the same as ice skates."
"Only not as cold when you fall down," Joe added.
"I think Joe should give it a try if he wants to," Mrs. Hardy said.
Mr. Hardy nodded. "I agree. Skating builds strong legs and quick reflexes."
"Just the things a detective needs, right, Dad?" Joe asked.
Mr. Hardy smiled. "Okay, we'll call Mr. Morton to ask him if you can join the team with Frank."
"Thanks, Dad." Joe grinned at Frank.
"You'd better not complain if the fourth graders are too rough for you, Joe," Frank said.
"I don't complain when I play football with your friends, do I?"
"Nooo...," Frank had to agree, "but ice hockey is a tough sport."
"They have strict rules for hockey for younger players," Mr. Hardy said. "No contact allowed. I started playing when I was about your age."
"You were a hockey player, Dad?" Frank asked.
"You bet. I played all the way through high school. I wasn't bad either. I'll try to make it to some of your practices. Maybe I can give you some pointers."
"Can you teach us how to do a slap shot, Dad?" Joe asked.
"Sure I can," Mr. Hardy said. "I used to be known as the slap shot superman -- and try saying that five times quickly."
"Slap shot superman," the boys yelled together. Then they started laughing."This is going to be so cool!" Joe said.
"Yeah, real cool. Especially when you're sitting on the ice, Joe." Frank gave his brother a friendly punch on the arm.